Then & Now with a Twist: Warwicks Cafe & Jr's Bar & Grill

Another quick post today from my Washington Then & Now book, where we tried to put a contemporary spin on a vintage photograph by recreating it with modern people.  In the image below, we see a picture of Warwick's Cafe on 13th Street near Pennsylvania Avenue.  An advertisement from 1894 described at as "an importer of choice wines, liquors, and cigars...a gentleman's resort with the best of service." 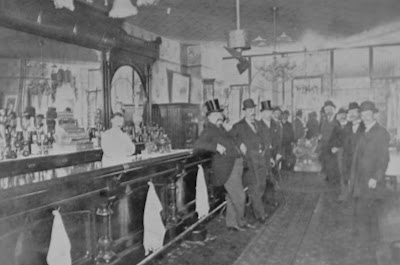 Mention the phrase "gentleman's resort" today and you might have the gay bar Jr's Bar and Grill come to mind.  Located at Church Street and 17th Street, NW, its been around for more than 25 years.  In 2002, co-author T. Luke Young and I visited, where we photographed employees on an early afternoon before opening.  Shown from left is bartender Matt Henry, Brad Lamm, Paul Williams, David Perruzza, and two unidentified liquor salesman that recall the Warwick cafe itself. 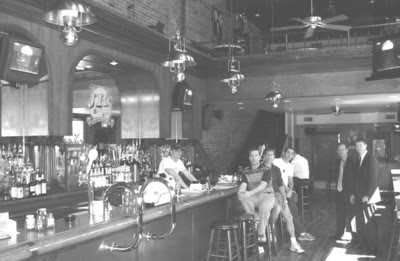 Posted by HouseHistoryMan at 5:59 PM

Thank you for your post. This is excellent information. It is amazing and wonderful to visit your site. It really gives me an insight on this topic. You can find more information about property here.