Ice Cream Cones and their connection to 1514 R Street 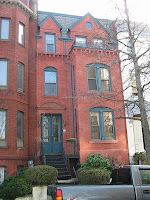 One never knows what interesting history old houses have ingrained in their past until one begins to research the past occupants, owners, and evolution of the building.  A single house in the 1500 block of R Street may not stand out among its many neighbors architecturally, but our recent research revealed that it was built by an individual that changed the way ice cream was manufactured in 1856, making it instantly available and affordable to the masses.

Jacob Fussell applied for a Permit to Build on August 24, 1886 for the construction of a single family house for himself at 1514 R Street.  He listed architect Albertus R. Duryee on the application as responsible for its design, and builder John H. Lewis for its construction, estimated to cost $5,000.  The estimated cost was slightly higher than the typical townhouse being built in Washington at the time, which usually ranges from $2,500 to $4,000. 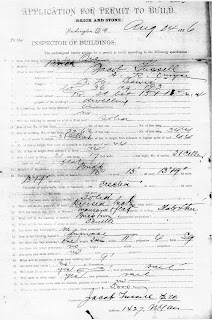 Architect Albertus R. Duryee first appeared as an architect-apprentice in the 1880 census, when he and his large family resided at 1606 Q Street, N.W.  Duryee had been born about 1862 in Connecticut, and his City Directory entry from 1881 indicated he was a draftsman, at the young age of just 19.  He was listed as an architect the following year.  Little is known of his other Washington commissions.
From 1885-1886, Duryee was not listed in the DC Directory, and apparently ventured to Philadelphia, as several of his designs appeared in the Builder and Wood-worker, published in 1884.  Jacob Fussell hired Duryee to design 1514 R Street in 1886 as one of his two personal residences, the other being in New York City.  He was 67 years old at the time, when most individuals of that era were living with their children.
Fussell was the founder and owner of the Fussell Ice Cream Company, said to be the first large scale, wholesale ice cream business in the country.  By 1886, he had businesses in Baltimore, New York, and Washington.  He had been born on February 24, 1819 in Hartford County, Maryland.  His first career followed an apprenticeship and journeyman in the tinsmith business.  Fussell left that occupation in 1851 to open four milk routes in the emerging city of Baltimore, before opening the first manufacturing plant for ice cream in the country on June 15th of that year, utilizing manually operated churns. 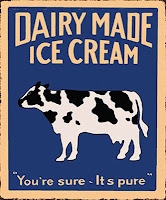 Fussell shipped his ice cream in trains packed with ice from Baltimore to Washington, Boston and New York, earning the title of the “father of the wholesale ice cream industry.” From then on, ice cream popularity skyrocketed, and Fussell’s contribution is often cited in the ‘history of ice cream.’  Other inventions were made to make ice cream better and faster, such as William Clewell's mechanical ice cream scoop in 1878.

Fussell sold his ice cream at less than half the price charged by others (twenty-five cents a quart against sixty-five cents a quart charged by others in the city).  By 1856 he had opened manufacturing operations and parlors in both Washington and Boston.  At the corner of Hillen and Exeter Streets in Baltimore, the Maryland Historical Society has erected a plaque in Jacob Fussell’s honor, proclaiming Baltimore as the “Birthplace of the ice cream industry.” 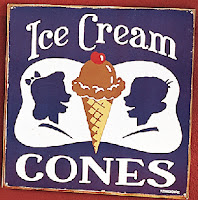 During the second half of the 19th century, ice cream became the delight of masses of Americans, thanks to the development of the wholesale industry. Before the advent of the ice cream factory, the frozen treat was made primarily by confectioners and sold in their stores, in retail shops, restaurants, saloons and parlors.  By increasing output and by sharply lowering prices, they put ice cream within the economic reach of nearly everyone.

National ice cream production in 1859 was estimated at only 4,000 gallons. Ten years later output had jumped to 24,000 gallons, and by 1899 it topped five million.  In 1874, James Horton became full owner of Fussell’s original firm, although Fussell continued many of his other ice cream businesses.  The operation grew rapidly and by 1895, it employed 250 men and ran 250 wagons.  The business continued until it became part of the Pioneer Ice Cream Division of Borden Company in 1928.

Fussell’s tenure at 1514 R Street was short, however, as he sold the house to Rear Admiral John Mitchell Hawley and his wife Ella by 1893, according to the tax assessment records.  Fussell died in 1912, and a copy of his Last Will and Testament was filed in Washington, in which most of his belongings were left to his wife Caroline C. Fussell, sons Mordecai, Francis, and William, and daughter Carrie E. Craft.  It revealed that he maintained a house in Washington that contained “bookcase and books, trunks, traveling bags, canes, umbrellas and personal effects,” which were left to his son William.  He also left him books at the Fussell house in Manhattan, located at 38 East 28th Street, between Madison and Park Avenues.  It was located adjacent to the MIT Technology Club at 36 E 28th, established in 1903.

The new owners of 1514 R Street in 1893 was Rear Admiral John M. Hawley and his wife Ella.  Hawley was born on July 28, 1846 in Northampton, Massachusetts, a descendant of one of the oldest and most prominent families of the town. He graduated from the Naval Academy in 1868.
From 1887 to 1890, Hawley was executive officer of the Nipsic (above), one of the United States fleet sent to Apia, Samoan Islands, during the uprisings in 1889. The American, British and German fleets in the bay were overwhelmed by a fearful hurricane which swept the islands in March, 1889, and the Nipsic was one of only two vessels that escaped total destruction, but both were driven ashore and seriously damaged. During the next two months, Nipsic was repaired enough to allow her to depart for Honolulu, Hawaii, where she arrived in early August 1889.  He remained at 1514 R until his death in 1925.

Who invented the ice cream cone? The answer is yet another ice cream mystery. Most sources credit Ernest Hamwi, who sold waffle-shaped cakes at the 1904 World's Fair in St. Louis, Missouri. He rolled his cakes into cones when a nearby ice cream stand ran out of dishes.

Can you give me any history on the freezer and its approximate value?

Thanks for you help,
Ada Sternberg