The "Giant Tomato Can" House in Dupont Circle 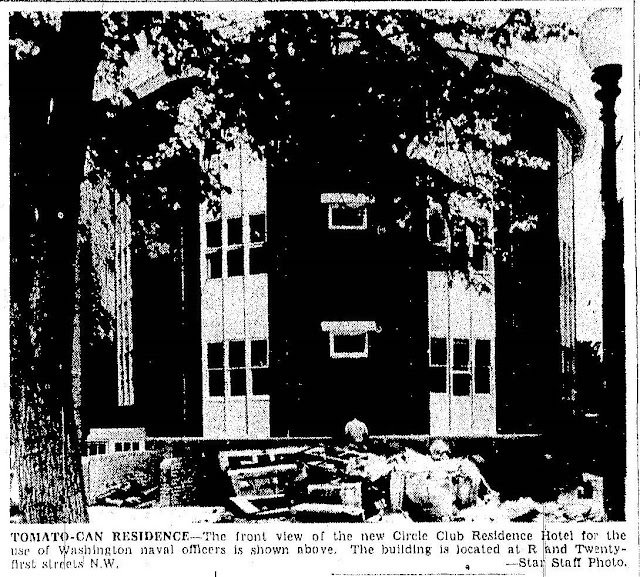 The owner of the three 1887 built houses at 1640-1644 21st Street, NW in November of 1943 was William Wadsworth Wood, who initially had a plan to build a large circular shaped hotel behind the row of homes on R Street, NW.  He changed his mind, however, just before he submitted an application to build numbered 265514 on November 29, 1943 when he decided to build a circular clubhouse and residences for the many single military men in desparate need of accomodations while in Washington, DC.  The house conversion and club cost an estimated $30,000. 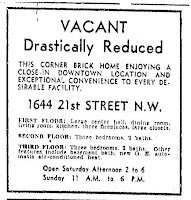 Wood was likely able to get the houses rather cheaply, especially the house formed out of the rear section of 1644 21st Street.  The house had been put on the market following a period where it was used as a front for war contract lobbying with some of the top ranking military members attending dinner parties thrown by John Kaplan aka John Monroe.

Despite being an architect himself, owner William Wood listed architect Angelo R. Clas as responsible for the design of the clubhouse that was built at 2104 R Street, NW.  He was born on February 13, 1887 in Milwaukee, Wisconsin to Alfred and Lucille Clas, and obtained his architectural degree from Harvard University in 1908.

The transformation of the three houses and the construction of the new club and residences in 1943 by William W. Wood was mentioned several times in the local newspapers, even in his engagement notice to May Greenough in the July 9, 1944 Washington Post.   The following articles sums up the development nicely and offers an insight into the odd interior configurations: 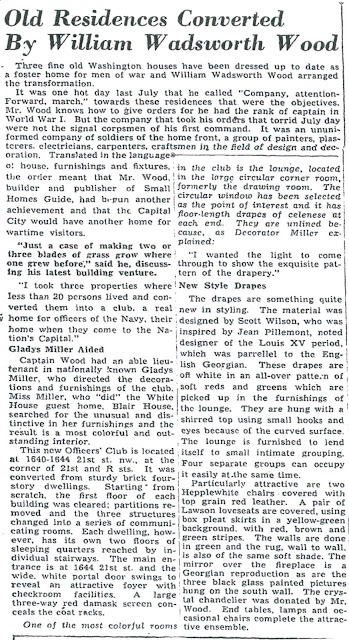 William Wadsworth Wood was born in Montgomery, Alabama on November 16, 1896 to Williams D. Wood (1859-1919) and his wife, the former Ida Killebrew (born 1868).  He attended the Alabama Polytechnic Institute, where he obtained his architecture degree.

He served in the U.S. Army in 1917 and 1918 as a Captain in France and England, according to a passport application completed in May of 1924, when he intended to travel to the British Isles, France, Italy, Spain, Portugal, Belgium, Holland, Germany, Austria and Switzerland.  He traveled out of New York City aboard the Republic on July 3, 1924.  His picture from the passport application appears above.  He married May Greenough in 1944, fairly late in life, and the couple made their home at 2129 S Street, NW.

William Wood was the publisher of Small Homes magazine and the author of the Wood Plan for Post War Jobs.  He moved to Washington, DC from New York in 1941 to focus on real estate development.

The Officer’s Service Club in the unusual round building was unique to Washington, DC, and its design was meant to maximize space for its many inhabitants.  A central circular staircase led to pie shaped rooms on each floor, with one occupant each, but sharing an adjoined bathroom.  A large ground floor room hosted lectures, dinners, and dances over the next several decades.  The club was sometimes referred to as the United Nations Officers Club and existed until at least 1968 and was affectionately referred to as the “Tomato Can” in many articles that appeared in the Washington Post and the Evening Star seen below and on the following pages.

Unfortunately, the 1940 is the last available in detail for researchers, and the 1950 census will eventually provide details on the occupants of the houses and the club building when it is released in 2022.  The Officers’ Service Club purchased the building from William Wood in May of 1955. 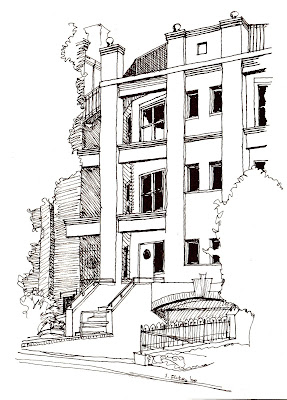 In 1967, two gunmen “equipped with lengths of rope, wire and adhesive tape, entered the Reserve Officers Club” and tied up club manager Paul F. O’Brien and bookkeeper Ray Goodman who were preparing a deposit.  They made off with a bank bag containing $6,000, $1,000 of which was cash.


The Officers Service Club maintained title to the deed of all the properties until January 1, 1978 when it was purchased by the “Conservative Club Inc.” In 1990, the houses and former "tomato can" were converted into nine unique and individual condominiums by the Robert M. Gurney architectural firm.  They added a brick screen wall to the R Street facades, and broke up the circular building into two large vertical condo units.

Posted by HouseHistoryMan at 4:52 PM