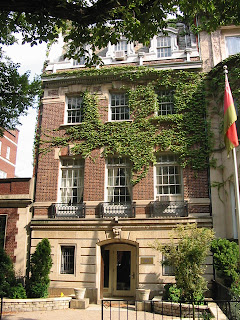 
Many people walking by the large townhouse at 1621 New Hampshire, which seems to blend in with its neighbors so well that it often goes unnoticed, might be surprised to know that it was built and owned by a prominent woman’s rights suffragist and Titanic survivor, and was later the site of a major jewel heist.  A single woman by the name of Helen Churchill Candee obtained a building permit for its construction on April 27, 1905; she also had a then small fortune of $20,000 needed for its construction. 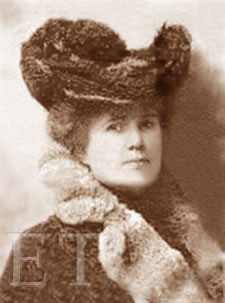 Candee was born Helen Churchill Hungerford on October 5, 1858, the daughter of New York City merchant Henry Hungerford and his wife, Mary Churchill.  She married Edward Candee of Norwalk, Connecticut, and had two children by him, Edith and Harold.  After the abusive Edward Candee abandoned the family, Candee supported herself as a writer for popular magazines such as Scribner's and The Ladies' Home Journal.  She initially wrote on the subjects most familiar to her - genteel etiquette and household management - but soon branched into other topics such as child care, education, and women's rights.

Candee was a strong feminist, as evidenced by her best-selling first book, How Women May Earn a Living (1900).  Her second book, An Oklahoma Romance (1901), was a novel that promoted the possibilities of settlement in Oklahoma Territory.  Having become an established literary figure, Candee moved to Washington in 1904 where she established herself as one of the first professional interior decorators; her clients included Henry Stimson and Theodore Roosevelt.  Candee’s book, Decorative Styles and Periods (1906), embodied her principles of design: careful historical research and absolute authenticity. 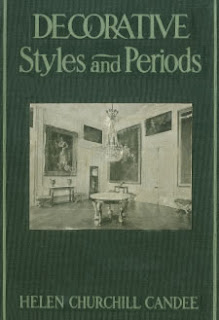 Candee was in Europe in the spring of 1912, when she received a telegram informing her that her son, Harold, had been injured in an automobile accident.  Candee hurriedly booked her passage home on a new luxury ocean liner, the Titanic.

Candee survived the great ship’s sinking, in spite of fracturing her ankle while boarding lifeboat No. 6.  Despite the pain of her injury, Helen managed to row with the others, clearing the side of the sinking ship by a few hundred yards. She was also able to lend moral support to Margaret “Unsinkable Molly” Brown, the legendary Denver millionairess and fellow suffragette, as she took control of the boat in the absence of leadership from the crewman in charge, Quartermaster Robert Hichens.  Under Molly’s direction, Candee and the other women rowed Boat 6 to the shelter of the rescue ship, Carpathia. 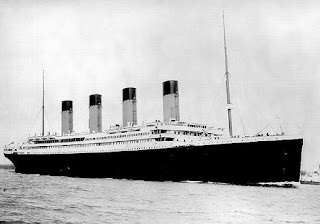 Candee eventually sold 1621 New Hampshire to a single woman by the name of Miss Mary Barclay Adams, the daughter of one of the owners of the Washington Evening Star newspaper.  Adams shared her new house with a close friend named Dora E. B. Merryman during the entire tenure of her ownership, which would last until 1928. Merryman was described in the local newspaper as “the most beautiful woman in Virginia.”
In March of 1911, both Adams and Merryman made headlines in the local newspapers when they reported a theft of jewelry from the house valued at $10,000, nearly half the value of the house itself.  The theft was “one of the largest of its kind ever known in this city.”  After contacting a local maid staffing service on March 21, 1911, Adams had hired a maid that said her name was Mary Miller, following an in-person interview that same day.  The maid reported to work the following day.

She went about her duties, but also gathered up jewels from both individuals undetected by other servants, and then made an excuse to run an errand to a pharmacy at the corner of New Hampshire and 17th Street.  She never returned.

The following day, the March 24, 1911 edition of the Washington Post reported additional details of the crime.  Police had learned that the imposter maid had forged her own letters of recommendations in an elaborate scheme in New York City, where she rented a luxury flat for several weeks, and posted advertisements for maids of her own.  When they showed up for an interview, “Miller” politely asked them to leave their letters while she made a decision to hire them.  She had compiled enough letters to carry out the scam in various cities for years, knowing that the demand for maids often outweighed any investigation into their backgrounds.  She would often strike the same day she was hired before anyone could be contacted to confirm references.

Police assumed that ‘Miller’ headed immediately to New York City, after changing out of her maids’ uniform, found in Union Station.  More than a year later, police got the break they were looking for when a woman by the real name of Sophie Beckendorf was arrested and imprisoned in the New York Tombs.  Under pressure, she had given up the names of Joseph and Lottie Vogel who had purchased all of her stolen jewels over the course of several years.  They were located in the Hotel Elsmere in New York in November of 1912, and killed during a shootout with police.

The house later served as a residence and doctor’s office for Dr. Leo T. Brown, and was purchased in 2007 by the Fund for American Studies, who is renovating the building for use as additional office space to their headquarters, located across the street at 1706 New Hampshire Avenue.