I love it when a homeowner in Washington, DC contacts us to investigate if a rumor they heard from an old neighbor is really true.  Especially if that involves a famous person, as did the owners of 4826 Davenport Street, who conveyed with much trepidation that they had heard their house was the childhood home of the beloved columnist Miss Manners – aka Judith Martin - could it be true?  “Anything is possible,” I replied, and we went to work.

The first thing I investigated was to find out what her real name was, and approximately how old she was.  Then we went to work on the house itself, when it was built, and creating a successive line of owners or renters.  The thought of composing a letter to Miss Manners left me many sleepless nights: how on Earth does one get it just right? Typed or hand written?

The house at 4826 Davenport Street was by William B. Pichler and William Richmond of the Pichler-Richmond Construction Company, who received a building permit on October 2, 1936.  They listed themselves as the builders, and William Crusemire as responsible for its design.  It was to be constructed for an estimated cost of $6,000.

An advertisement for the house appeared in the Washington Post on January 10, 1937, when it was listed for $11,650.00 by real estate agent Clifton D. Kelley.  Pichler & Richmond sold the newly completed house on February 10, 1937 to Jacob and Helen A. Perlman.  They obtained a mortgage in the amount of $9,000, and a second mortgage in the amount of $7,000 that was due in three years.  The Perlman’s would own the house for the next eighteen years, until 1955. 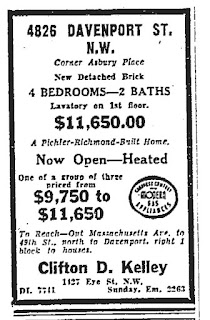 There was the answer: Miss Manners was born Judith Sylvia Perlman!  But, we had to make sure we had the correct Perlman family, as there were dozens in Washington at the time.  Either way, the Perlman family that purchased 4836 Davenport Street was turning out to be quite interesting.

Jacob Perlman was born on May 10, 1898 in Byalostock, Poland.  He immigrated to the United States in 1912 with his father, Mordecai (aka Max) and mother Pauline to Madison, Wisconsin and became a naturalized citizen in 1918.[1] They had been invited by their brother Selig, who had already begun a lifelong academic career at the University of Wisconsin.

Jacob’s WWI Draft card (below), filled out on September 12, 1918 indicated that he was of medium height, slender build, with brown hair and light colored eyes.[2]  He graduated from the University of Wisconsin in 1919, and spent the next two years as statistician of the New York State Department of Labor.  He was listed as a lodger at 1156 Brookline Avenue in Albany, NY in the 1920 census, and indicated that his native language was Yiddish.

In 1921, Perlman returned to the University of Wisconsin for graduate studies and to teach in the Economics Department.  He obtained his M.A. in 1922 and his Ph.D. in 1925.  Perlman moved to Washington, DC in 1933 as a staff member of the Committee on Government Statistics, and married Helen Aronson in 1935. 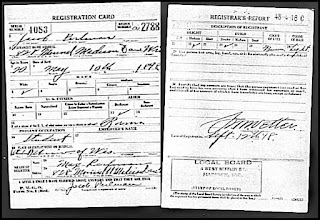 The Perlmans had a son named Matthew Saul and a daughter Judith Sylvia Perlman who was born on September 13, 1938.  Matthew attended Brown University and Harvard Law School, and eventually became a partner at Arent, Fox.

Judith would marry Robert Gene Martin and indeed would become famous for her columns and countless books written under the pen name ‘Miss Manners.’  Growing up, Jacob once asked his sassy child Judith “How come you’re so upper class and we’re so lower class, and you're our daughter?”[3]

With that in mind, I penned a letter to Miss Manners once I found her mailing address – handwritten on heavy cardstock stationery – and asked about her youth at 4836 Davenport Street.  She responded via a phone call – and was it fun to talk to her about the house!

In 1943, the Perlman’s took out a classified advertisement in the Washington Post to seek the return of a lost sugar ration booklet that had been issued to their daughter Judith, not unusual despite the fact that she was only age 4 at the time.  A 1948 Washington Post article included Judith among local youth that had collected unused streetcar tokens for donation to Children’s Hospital.[4]

Judith’s mother Helen had been born in New York City in 1902, and attended the Maxwell Teacher’s College.  She began her teaching career in the public schools of New York City, and in the 1940s after moving into 4826 Davenport Street, she became a member of the Visiting Instruction Corps and taught disabled children in their homes.

Between 1951 and 1956, Jacob Perlman served as a United Nations advisor on economics to the governments of Colombia, Greece, Bolivia, and the Philippines, before joining the National Science Foundation, where he eventually became the head of the office of Economic and Manpower Studies. It was living in various foreign countries that daughter Judith credits with establishing her knowledge and passion of both manners and etiquette.

In an interview in 1984, Judith Martin fondly recalled that during their time in the Philippines, “My father sat us down, my brother and me, and said, ‘Children, we have to tell you something. We have reached the crucial point when the servants outnumber us 2 to 1. It takes a while to get used to this kind of life. It takes about two minutes. And it takes the rest of your life to get unused to it.’ ”[5]

Judith began attending Wellesley College before the family returned from abroad, graduating in 1959.  She married Robert Gene Martin, a graduate of Harvard College as well as Harvard Medical School.

An article in the November 5, 1984 edition of Time magazine entitled “I Have Ten Forks,” neatly summed up her early education, career, and social life.  It reads:

…While still a student at Wellesley, where she claimed to have majored in gracious living, Martin got her first job on the Washington Post. “It was an accident,” she says. “My parents wanted me to find a summer job, and I thought the Post would be a safe place to apply, thinking they would never hire me since I had no experience. They hired me as a copy girl—monotonous work with terrible hours and featuring a take-home pay of $27.50 a week and the opportunity to get screamed at a lot.”

Since, “you can’t be young and miserable forever,” as she puts it, Martin eventually won an assignment to report on the Washington social circuit. She enjoyed “that nice, healthy vulgarity” of the Lyndon Johnson regime, particularly when L.B.J. invited her and several other women reporters at a White House party to come upstairs. “We stayed for two hours, eating popcorn from a silver bowl, while he swore he had never wanted to be President.”
The Nixons were less amusing. When the White House decreed that reporters covering Julie Nixon’s wedding reception had to stay outside and rely on briefings, Martin sneaked in by masquerading as a friend of a bridesmaid. She subsequently found herself banned from Tricia Nixon’s wedding, but perhaps that was because she had written that Tricia dressed “like an ice-cream cone.” The White House announcement explained that “the First Family does not feel comfortable with Judith Martin.” Remarked Martin’s husband: “I'm scared to live in a country that's run by a man who's scared by the likes of you.”

Robert Martin, 49, an affable, Harvard-educated physician who does research in biochemical genetics at the National Institutes of Health, claims that his own manners have required no polishing during their 25-year marriage because he was “already perfect when we met, and so was she.” If anyone has the temerity to address him as Mr. Manners, says Dr. Martin, “I correct them immediately. I tell them it's Lord Manners, not Mr. Manners.” (The name Miss Manners derives from a figure in Victorian English folklore who was originally called Lady Manners. She was conjured up so that when children tried to gobble all the food on the table, they could be ordered to leave a little bit on the plate “for Lady Manners.”)

Just as Miss Manners urges, the Martins have reared, educated and nagged at two children, who appear to have acquired flawless manners. “It's amazing how much a parent can terrify a child without actually doing anything,” says Nicholas, 18, a freshman at Harvard. Jacobina, 13, plays the harp and studies at a private school in Washington. Once when Martin relayed a prying reporter’s request to interview the whole family at home, Jacobina objected, “But mother, I wasn't brought up in that manner.”

She was right. Throughout Martin’s gradual self-transformation from an impudent reporter into a stately personage, she has always maintained a sharp division between her private and public lives. There is no business entertaining at her handsome Georgian brick home near the Washington zoo (a hired couple do the housework), and when she does go out socially, it is usually a family expedition to the theater or a small dinner with friends. “As a rule, I only go to the kind of thing I give,” she says, “a dinner where everyone sits down and has real conversation.” The seating is limited to ten people, since “I have ten forks of all kinds.”

Having left the Post to live by syndication in 1982, Martin now works alone in an antique-filled ground-floor office in a town house a ten-minute bus ride from her home. The bookshelves contain a large collection of etiquette books, from The Book of the Courtier to Victorian Vista. Martin devotes one day a week to writing her column on an IBM word processor. Some of her mail, which may be useful later (she has to work two months in advance), gets saved in wooden trays with such labels as Weddings, Business or Diverse Civilities; other letters receive a standard answer in engraved script on cream paper (“Miss Manners regrets exceedingly . . .”)

The remaining four days Martin devotes to other writing: book reviews, speeches, a new novel titled Style and Substance. Her first, Gilbert, a rather arch attempt at a comedy of manners, received generally favorable reviews in 1982. She has also published a collection of newspaper essays, The Name on the White House Floor (1972).

To those who regard Miss Manners as an eccentric anachronism, Judith Martin has a contemporary answer. “It would be ridiculous to say that manners should be static, and we should return to 1948 and behave like that,” she says. “The world changes and develops. There are lots of new situations.” She has always been richly prepared for them. Printers at the Post, she recalls, tried to embarrass her years ago by telling off-color stories. “I'd look right at them and say, ‘I don't understand it. Could you explain it to me?’ Have you ever seen a printer blush?”

Judith Martin continues to reside in Washington, DC, and was the recipient of a 2005 National Humanities Medal from President George W. Bush. On March 23, 2006, she was a special guest correspondent on The Colbert Report, giving her analysis of the manners with which the White House Press Corps spoke to the President.  Her advice column is distributed three times a week by United Features Syndicate and carried in more than 200 newspapers worldwide.  She also produces a column for the Microsoft Network. 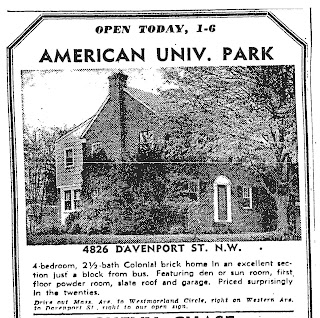 4826 Davenport Street was advertised for sale in the May 1, 1955 edition of the Washington Post (left), “Priced surprisingly in the twenties.”[6]  Later in life, Perlman taught at American and Catholic Universities, Johns Hopkins University and the University of Connecticut.  He joined the esteemed Cosmos Club in 1963.  Jacob Perlman died in April of 1968 in Israel while on a celebratory vacation to Greece and Israel with his wife Helen.[7]  He is buried in King David Memorial Park in Falls Church, Virginia.   At the time, he and his wife Helen resided in an apartment at 2900 Connecticut Avenue, NW.[8]