The original Calvert Street Bridge was moving - quite literally. 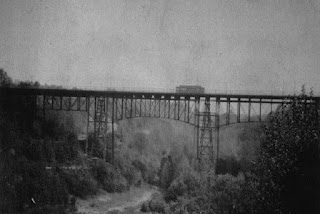 Many pedestrians and motorists alike that traverse the Calvert Street bridge today likely are unaware that the 1935 built bridge replaced an earlier, iron truss bridge that had been completed in 1891.  The large span bridge towered over the deep Rock Creek Park.  Amazingly, in order to build the current bridge beginning in 1934, the entire iron truss bridge was moved out of the way – by a team of horses, no less.
The deep Rock Creek Park posed a serious obstacle for Washington development north of the city.  Travelers headed north had to drive horses and early cars down the steep embankment, cross the shallow water, and climb up the other side.

A wooden bridge was eventually built in the 1870s over the water on what was then Woodley’s Lane, leading from the Adams Morgan neighborhood to the emerging summer estates in what is today Woodley Park.  The Engineer Commissioner reported no immediate plans for constructing a permanent bridge in 1887, citing the rugged topography as not worth tackling.

Senator Francis G. Newlands and his business, the Chevy Chase Land Company, had purchased enormous amounts of land from the termination of Connecticut Avenue all the way to Chevy Chase in secret negotiations to keep prices down.  His Rock Creek Railway Company was formed to transport new home buyers to the north of the city, and it required bridges to span Rock Creek.
Construction commenced on a large iron truss bridge leading from Columbia Road to Connecticut Avenue in Woodley Park that was completed in 1891.  It was built by the Edgemore Bridge Company.  When completed, the ownership of the bridge was turned over to the city government. 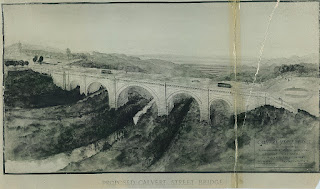 The original bridge was an impressive site.  It was 755 feet long, and cost an estimated $70,000.  The wrought iron used for its construction weighed a total of 1,266 tons.  Beginning in 1917, however, District Commissioners hired local architect George Oakley Totten, Jr., to design a new Calvert Street bridge.  The Commission of Fine Arts (CFA) determined that his resulting design was too costly and ornate, and feared that it might overshadow the newly completed Connecticut Avenue Bridge to the west.

Totten fought for the use of his stone arch design, but the CFA remained unconvinced.  Finally, in 1933, Totten’s design was finally discarded, and the CFA selected Paul Crete as chief designer for a new bridge.  His first design was also rejected, and the CFA finally settled on a masonry design with multiple arches that was eventually built.

The need for crossing Rock Creek remained during the construction period of the new bridge, however, which was begun in 1934.  The decision was made to move the original iron bridge 80 feet downstream to be used for diverted traffic until the new bridge was completed the following year.
Engineer John Eichleay Jr. was hired for the job.  His grandfather had founded the company in 1875 expressly to relocate hard-to-move things. 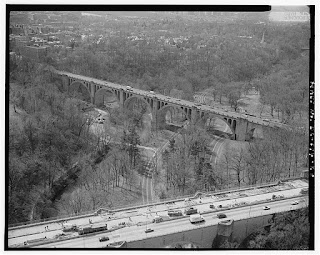 In the early dawn hours of June 7, 1934, the five 130 foot piers of the bridge were lowered onto a specially made track of horizontal girders, and outfitted with wheels.  At 5 a.m., workers cut the railroad tracks on the bridge above, and a series of block and tackle attached to the bridge with a windlass.  Horses took over, and incredible, in just 7 hours and fifteen minutes, the bridge was at its new position 80 to the west.

Thousands of onlookers had gathered to watch the unusual feat, and after it was in place, the railroad track was reattached and open for traffic in less than two hours.  Following the completion of the masonry arch in 1935, the original Calvert Street Bridge was dismantled for scrap.