John Edgar Hoover was reportedly born at 413 C Street, SE on New Year's Day 1895 in Washington, DC, to Anna Marie (Scheitlin, 1860–1938), who was of German Swiss descent, and Dickerson Naylor Hoover, Sr. (1856–1921), of English and German ancestry.  The uncle of Hoover's mother was a Swiss honorary consul general to the United States.

Unlike his two siblings, however, oddly there is no record of Hoover’s birth, and a certificate was not filed until 1938, following his mother’s death, leading to speculation that his father was not Dickerson Sr.
The Hoover family was enumerated there in the 1900 census, and the house later became known as 413 Seward Square, SE – since razed and today the site of the Capitol Hill United Methodist Church.
At Central High School, he sang in the school choir, participated in the Reserve Officers' Training Corps program, and competed on the debate team.   He obtained a law degree from George Washington University Law School in 1916, and an LL.M., a Master of Laws degree, in 1917 from the same university.

Following the death of his father in 1921, Edgar lived with his mother in the same house on Seward Square, until her death in 1938, when he moved into a house a year later at 4936 Thirtieth Place, NW in the Forest Hills neighborhood.  It was built beginning in December of 1939 for James E. Schwab.  It was designed by Edwin B. and Lois B. Taylor and constructed at a cost of $12,000.


But yet, during Hoover's tenure as head of the FBI, which lasted from 1924 until his death in 1972, there were persistent rumors--both inside and outside the FBI--that Hoover himself was gay and descended from African-Americans. The recent publication of a book by Millie McGhee titled Secrets Uncovered, a descendant of Mississippi slaves who believes that her family is related to J. Edgar Hoover, has re-opened the issue.


It is generally accepted that Clyde Tolson, an associate director of the FBI who was Hoover's heir, may have been his lover.  Hoover died on May 2, 1972 at 4936 Thirtieth Place NW.   Tolson inherited Hoover's estate and moved into his home, having accepted the American flag that draped Hoover's casket. Tolson is buried a few yards away from Hoover in Congressional Cemetery. 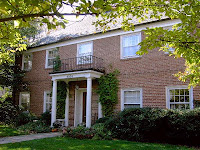 Copyright Paul K. Williams.
Photographs from Forest Hills, US Department of Justice, Federal Bureau of Investigation.
Posted by HouseHistoryMan at 9:00 AM

I'd read that J. Edgar Hoover was actually a mulatto passing for white. The photo you have of him here tends to support that claim. Actually, it makes you wonder how how he was able to pass ... unless, like his being gay, people (i.e., the press) chose to just be silent on these facts.

The picture you have of the "living room" is actually his finished basement.

The image you have of the "living room" is actually his completed underground space.


dang...dang...dang! need to seriously look at that limosine company, driver policy and practice...seem like the
victims could not opened the door from the inside...driver may have had the children safety aka drunk passengers
lock-on...mmmm, so only the skinny people got out??? dry them tears...time to sue...driver not shaken playin stupid...

Maurine Lucille Hill, Lt. Col. USA(ret), born in Kansas City, MO in 1929, has always claimed that her white grandfather was from Germany or his parents were originally from there and that her family is directly related by blood to J. Edgar Hoover thru them. She's alive, living in Suitland, MD and declares that when the remains of her brother, James Frank Hill, naval seaman killed in a race riot towards the end of WW2, was delivered to her family under guard with orders that the casket not be opened, John Edgar sent roses and a representative to his burial.

Colonel Hill, the first black woman to become State Commander of the MD D.A.V., states that her grandfather, 'Major' Hill, fought in the Civil War as a confederate officer. Following the war, he met, courted and married a black woman who arrived in the states in the employ of a family from Europe. They had two children, one light, bright and almost white, Charles, while the other, Henry, her father, was more dark skinned.

'Major' Hill's wife was raped and killed by two white men while he was away from home on Masonic business. When he returned to Alabama he located and killed them in retaliation, which forced him to flee the state with a very young son, Henry and one who was already a teen. He left the teen, Charles, with relatives en-route to Kansas, a slave free state. Charles went on to serve and retire as an officer in the Army, domiciled in the middle of the country, near but never visiting his darker brother since he was passing as a white man. Like J. Edgar, Charles maintained a very discrete contact with her father, usually just some roses or a letter or phone respectively. Colonel Hill says his descendants may have reached out to her some years ago but her frame of mind and the timing was wrong for a family reunion. Having recently reached her 85th birth anniversary she has reconsidered and welcomes any and all contact from her extended and heretofore unknown family members. She can be reached at PO Box 270, Temple Hills, MD 20757.