History of the odd Ffoulke Mansion at 2013 Massachusetts Avenue, NW: A Man and His Tapestries 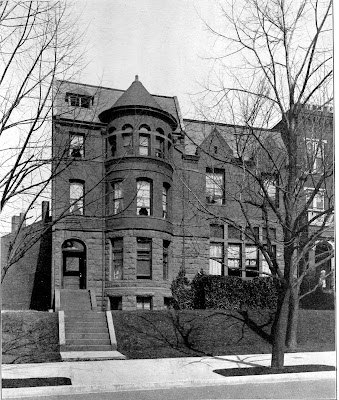 One might be hard pressed to assign an author a combined article about Welsh ancestry, Quaker religion, antique tapestries, Royal weddings, early retirement, and even Pope Urban VIII, but they are all integral to one mansion that once stood at 2013 Massachusetts Avenue, NW.  It was built in 1886 on the site of what today is the Hilton Embassy Row hotel just west of Dupont Circle.

The house was speculatively built by developer Brainard H. Warner and designed by James G. Hill in 1886.  Built at a cost of $11,000, it was purchased shortly thereafter and vastly expanded by owner Charles Mather Ffoulke (1841-1919).  He had an addition added onto the eastern side that nearly doubled the house for one specific purpose: to display his growing collection of 17th Century antique tapestries.

Ffoulke was born in Quakertown, Pennsylvania, on July 25, 1841, the son of Benjamin Green and Jane (Mather) Ffoulke.  For generations, both his maternal and paternal families had been known as “counselors of the peace” being land surveyors and conveyancers charges with the amicable settlement of disputes common with early land settlement and development in and around Bucks county, Pennsylvania among the fellow Quaker inhabitants.  His father gained credibility with the North Pennsylvania Railroad when he negotiated a new right of way for the extensive track system with hundreds of families that resulted in not one single lawsuit.  The Ffoulke family received their own land in Quakerstown by a grant from William Penn. 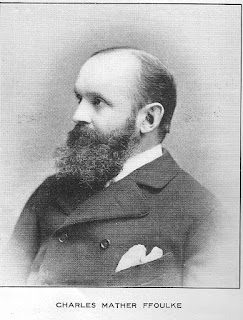 Following a short teaching career in Quaker schools, Charles Ffoulke entered the wool business in Philadelphia in 1861.  It was wildly successful, and he retired just eleven years later, in 1872.  He set off on an extended two year vacation to Europe to study art and tapestries, and married Sarah A. Cushing in Paris on December 10, 1872.  He crisscrossed the Atlantic several more times between 1874 and 1884, before embarking on a five year tour beginning that year. He had five children who included: Horace Cushing, Helen Seagrave, Gladys, Gwendolyn, and Charles M. Jr.

Ffoulke had nearly completed a long manuscript entitled “General History of Tapestries” when it was accidently destroyed and he began to work on the tome all over again.  He also compiled a book on the art tapestries of America, and a book entitled “A History of the Barberini Collection of Tapestries,” which apparently caught his fascination: he purchased the entire collection of 135 tapestries in its entirely in 1888.  The collection had begun in 1610 by Italian Cardinal Francesco Barberini (1597-1679), aided by his uncle, Pope Urban VIII, and had largely been assembled by 1690.  They were considered the most important, varied, and extensive collection of tapestries to be owned by a private citizen at the time.  Urban VIII was not only a Pope, but exercised temporal sovereignty over an extensive part of central Italy. 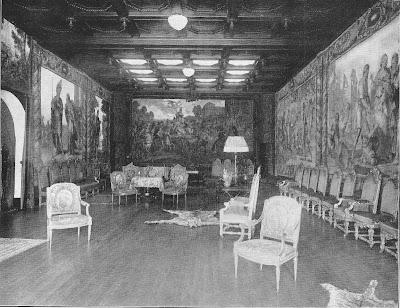 Ffoulke had to store most of the collection in a rented Convent in Florence, however, because of the high excise tax imposed on antiques of such value when they entered the United States.  Only his most prized tapestries were brought to hang in the gallery at the Massachusetts Avenue house, or temporarily lent to museums around the globe.  That gallery also hosted weddings for his daughters, who each married visiting Diplomats and Royal descendants from all parts of Europe.

Ffoulke died suddenly in New York City on April 14, 1909, but his widow continued to reside at 2013 Massachusetts Avenue until the late 1920s.  The tapestries were sold to various wealthy individuals, including Phoebe Hearst, and John R. McLean, among others, and today have mostly found their way into museums and churches such as the Cathedral of St. John the Devine in New York City. 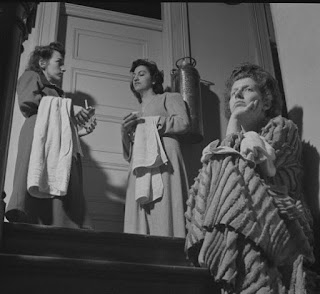 Like many large houses in Washington, the Ffoulke mansion was transformed into a boarding house during World War II for the onslaught of government workers.  Photographer Esther Bubley captured those at 2013 Massachusetts Avenue in January 1943 for an Office of War Information project and noted that it the “schedule for use of the boardinghouse bathroom is worked out so that each person has eight minutes in the morning.  It is social suicide to ignore the schedule and cause a tie-up like this.”  Shown in the picture are Enid Bubley, Roselyn Silverman, and Bluma Horowitz at Dissin's, a boarding house at 2013 Massachusetts Avenue, NW that catered to “young Jewish people.”  (Library of Congress, Prints and Photographs Division)

Posted by HouseHistoryMan at 3:47 PM No comments: