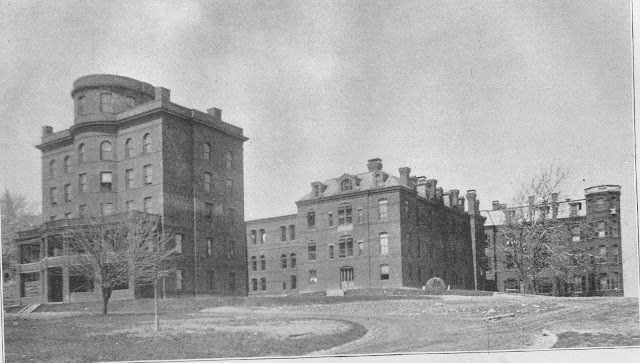 Washingtonians traveling today along Florida Avenue between 10th and 11th Street might take notice of the elaborate stone and wrought iron fence below that surrounds the entire square, now occupied by an elementary school and high rise housing project coined Garfield Terrace.  It was once the site of a large complex known as Garfield Memorial Hospital, one of many institutions and public building named after the assassinated President.  However, even though it was built as early as 1884, the hospital was not the first structure on the Square that prompted the elaborate fencing that remains to this day. 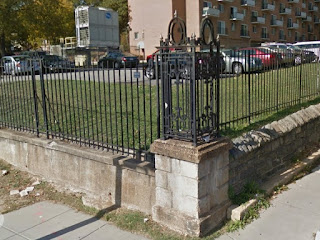 To the founders of Garfield Hospital, who incorporated the institution on May 18, 1882, it seemed appropriate to name it after President James Garfield, “whose long and patient suffering from the wounds that caused his death should be commemorated by a hospital, which, though located in Washington, should possess a national character” stated Mr. Justice Miller at its inaugural address on May 30, 1884.  Funds for the facility had been raised by an appeal to the “wives and daughters” of Congressional members, 150 of whom first met at the parlor of the Ebbitt House in the spring of 1882.

The seven-acre site along Florida Avenue between 10th and 11th Street, which extended nearly two full blocks to Euclid Street, was purchased in 1883 for $37,500.  Developer and patron Henry A. Willard held a $22,000 mortgage on the property.  The property apparently contained two mansions, one of which was the “Schneider mansion,” once the summer home of Dr. J. C. Hall, and the large “Haw mansion” facing Florida Avenue, which received a $12,000 addition and alteration to create the first building of Garfield hospital beginning in late 1883.  Its grand iron fence was also altered to include an arched sign for the new hospital at its entrance from Florida Avenue near 11th Street, opening to a long winding drive into hospital grounds.

Unlike Children’s Hospital, located just two blocks to the west and featured in the February Scenes of the Past, Garfield Hospital was incorporated to serve those in need of medical assistance that could not afford other institutions in the city.  Opening day was staged on May 30, 1884, and largely organized by Mrs. John A. Logan.  The day was recorded as a beautiful balmy spring day, and the opening and dedication consisted of a series tents set on the vast lawn for refreshments, supper, and confections.  Chinese lanterns hung from trees throughout the grounds of the former estate while patrons danced in the mansion’s ballroom.  Incredibly, funding for the hospital was raised in numerous foreign countries including France, Great Britain, Japan, India, Brazil, Haiti, China, and Russia, even with King George from Tonga committing $239.50. 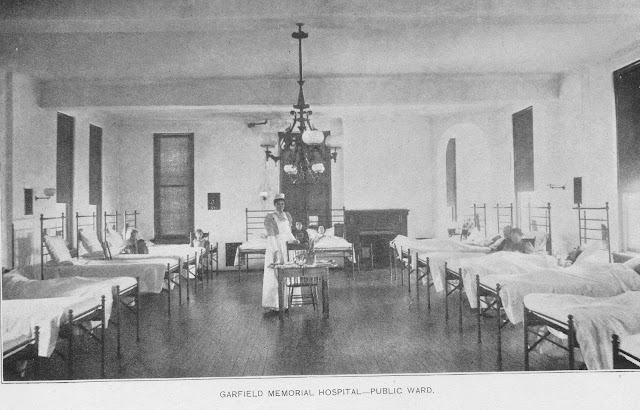 The first patient at the Hospital was admitted on June 18, 1884, a female government clerk, during a time when the resident physician earned just $50 per month.  Dr. Swan M. Burnett performed the first surgery at the facility on June 28th of that year, on an African American Civil War veteran.  In all, the hospital treated 178 patients the first year, 119 of whom received their medical treatment free of charge.  Soon after, the hospital began to experience financial strains and over crowding, prompting Congressional intervention and funding.  Meanwhile, the Ladies Aid Association collected $168.79 in 1885 from a collection box placed near the Garfield assassination spot in the Baltimore and Potomac Railroad station on Capitol Hill.

The following two decades witnessed an expansion of the hospital grounds and buildings under the supervision of architect Appleton P. Clark.  In 1888, local resident Alexander Graham Bell donated an ambulance, and an anonymous donor had an ice house built on the property in 1890.  All races and ages were admitted to the hospital throughout its tenure.  In 1889, the average cost per patient per day was $1.54!

The number of buildings steadily increased, as a 100-bed facility was added in 1892, a new administration building was added in 1894, along with several laboratories, a caretaker’s cottage, and a Willard memorial fountain.  By 1898, the hospital consisted of six large buildings worth an estimated $250,000.  A large annex was added in 1899, and in 1907 the remainder of the Schneider tract on 11th Street was purchased, on which a very large central building with 78 individual rooms for patients was constructed in 1923 at a time when 96 nurses lived on the property.

In 1924, the hospital had grown to be able to admit 4,397 patients in that year alone.  A huge expansion plan was scraped due to the efforts of World War two, but the facility was one of the first hospitals in the city to receive air conditioning, in 1954.  Just four years later, the complex was closed for good.  Demolition began in November of 1960, and the site remained vacant for several years until an elementary school was built along 11th Street and a high rise housing building constructed along Sherman Avenue (10th Street) that both remain to this day.

Posted by HouseHistoryMan at 6:03 PM

Thank you for this interesting information about the place I was born in 1938!
George Hastings