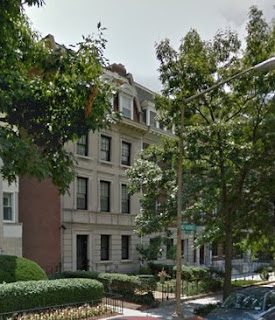 Many years ago, an owner of 1711 New Hampshire Avenue, NW approached us with a history mystery; she had found several steamer trunks with the name ‘Grant’ painted on them, and wondered if it were at all possible they could have once belonged to the Ulysses Grant family.  We not only found the connection, but found a Russian Princess to boot.

The house had been built in 1911-1912 at a cost of $25,000 by Franklin Sanner, who was developing other large properties close by as speculative development.  It was designed by Albert Beers.

Owner Sanner sold the residence to Ida Honoré Grant on September 17, 1912, as recorded Liber 3547, Folio 366. She listed herself in the 1915 City Directory as the widow of Frederick Dent Grant, the eldest son of famed Civil War General and President Ulysses S. Grant, and was from a wealthy and prominent Chicago family. She was listed as the sole resident at the address in the 1913 City Directory.  The couple is pictured at right. 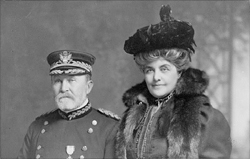 As the son of Ulysses S. and Julia Dent Grant, Frederick Dent Grant was born on May 30, 1850, in St. Louis, Missouri. He attended West Point Military Academy, graduating with the class of 1871. He was assigned on June 12th of that year to the Fourth United States Cavalry, spending two years on outpost duty taking part in combats with Indians in the far west. As a result, he was promoted to the rank of First Lieutenant and Lieutenant-Colonel by 1873, and eventually resigned his military commission in June of 1881.

Shortly thereafter, he married Ida Honoré, the daughter of a Chicago millionaire. They resided in New York with the widow of General Grant. He served as republican Secretary of State for New York from 1887 to 1888. Also during this time, Frederick served as minister to Australia, and was Police Commissioner of New York City at the outbreak of the Spanish War, when he became Colonel of the Fourteenth New York Volunteer Infantry, and was soon thereafter appointed a Brigadier-General of the United States Volunteers.

During the Spanish War, he served in Puerto Rico, and following the war, remained in command of the military district of San Juan. Shortly thereafter, he transferred to the Philippines, commanding the Second Brigade of the First Division of the Eighth Army Corps. While there, he took part in the battles of Big Bend and Binacian, afterward being transferred to the Second Brigade of the Second Division, advancing on Northern Luzon and Zamballes.

He returned to the States in 1901 when he was appointed a Brigadier General in the United States Army and assigned to command the Department of Texas, with headquarters in San Antonio. In 1902, he was transferred once again to the Philippines, to the Sixth Separate Brigade in Samar, where he received the surrender of the last insurgent forces.

In 1914, Ida H. Grant apparently rented the house to U.S. Senator William P. Jackson (left) and his wife, as they were listed as the occupants in the City Directory for that year. Incidentally, another William P. Jackson appeared in the same City Directory, and listed his profession as an Assistant Inspector General in the United States Army, boarding at the Army and Navy Club.

The daughter of Ida H. and Frederick Grant, Julia, was born in the White House in 1876, while her father was fighting in the Indian Wars in the West. Her grandfather, Ulysses Simpson Grant, was then serving his second term as President. She grew up in Vienna where Frederick later served as the American minister to the court of Emperor Franz Joseph. 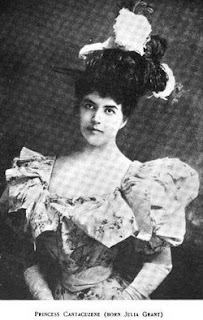 In 1899, at the Newport, Rhode Island home of her aunt, Mrs. Potter Palmer of Chicago, Julia Grant was married to Prince Michael Cantacuzene, chief military adjutant to Grand Duke Nicholas, the grandson of Tsar Nicholas I. For the following eighteen years, she lived on her husband’s vast estates near St. Petersburg and in the Crimea until the Russian Revolution forced them to escape to Sweden.

Princess Cantacuzene, as she preferred to be known, became the frequent lecturer and author of three books, all relating to her life in Russia before and during the Revolution. As a popular lecturer, she was an outspoken foe of Communism as well as of the New Deal during the 1930s and 1940s. In 1934, she regained the American citizenship she had given up at her marriage thirty five years earlier. She died in 1975 in the Dresden Apartment building at 2126 Connecticut Avenue at the age of ninety-nine.  Interestingly, it was designed by Albert H. Beers in 1909, just two years before he designed the house of her mother at 1711 New Hampshire Avenue.

The son of Frederick Dent and Ida Honoré Grant, Ulysses S. Grant III, was born on July 4, 1881 in Chicago. He too was raised primarily in Vienna, attending the Thresianum school there before attending the Cutler School in New York City and Columbia University in 1898. He graduated from Westpoint Military Academy in 1903, and graduated from the U.S. Engineer’s School in 1908. He married Edith Root, daughter of the Secretary of State Elihu Root, the Secretary of State under Theodore Roosevelt on November 27, 1907, and together they lived in San Francisco.

He became a D.C. resident in 1925, and lived at 2117 LeRoy Place, N.W., when he became active in numerous urban planning affairs, including serving as the Executive Director of the National Capitol Park and Planning Commission. At the time of his death in 1968, he maintained a residence at 1255 New Hampshire Avenue, N.W. 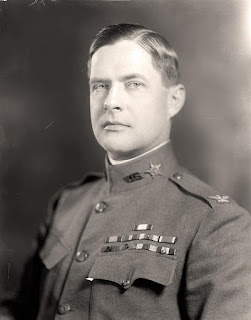 The last will and testament of Ida Honoreé Grant has several inclusions that offer insight into the lifestyle that she led while in residence at 1711 New Hampshire Avenue, N.W. It was written on September 2, 1926, and entered into probate on September 8, 1930, shortly following her death.
The real estate at 1711 New Hampshire Avenue was willed exclusively to her son Ulysses S. Grant III (left) upon Ida Honore Grant’s death in February of 1930.

Her daughter Julia Grant Cantacuzene and son Ulysses S. Grant III were to split most of the personal artifacts and furnishings of the home, including "all clothing and wearing apparel, jewelry and articles of personal use and adornment, books, pictures, bric-a-brac, silver and household furniture, articles and effects, of every kind and description, as well as any other tangible personal property and effects, of which I may die possessed." Ida was also proud that she was able to keep the aggregate value of multiple bonds "intact and equal to the value of said property at the time it was left to me, so that I might be able to make this bequest and pass it on...to our children." The bonds in question were housed in her safe deposit box at the American Security and Trust Company in Washington, D.C. It was her wish that the children would be able to retain the bonds at their face value to pass on to their children in remembrance of their father Frederick Dent Grant.

The remainder value of the estate was to be placed in a Trust at the American Security and Trust Company and equally dispersed over the course of 21 years in equal parts to her son and daughter. She expressed the trustees "to be very conservative, and to purchase only such bonds or other securities, which, after careful investigation, they believe to be safe and secure. I prefer that my trustees invest in such securities rather than in real estate."

Her daughter Julia was specifically granted the sum of $50,000, to be gleaned from the proceeds of the sale of real estate owned in the state of Illinois. She also noted that her daughter was "amply provided for by a trust created by my sister, Bertha Honoré Palmer, which Trust has greatly increased in value through the able management of my brother, Adrian C. Honoré."

To her son, she specified that "all letters and papers of an official, business or personal character owned by me, including those which belonged to his father, and also those which belonged to his grandfather, General Ulysses S. Grant." She made that bequeath "in order to carry out my late husband's express wish that his son should possess these letters and papers."

Copyright Paul K. Williams
Posted by HouseHistoryMan at 11:29 AM 1 comment: