Han the Man: The Hahnemann Memorial on Scott Circle 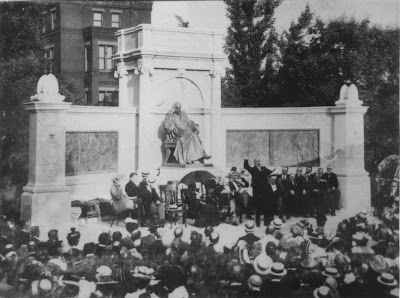 The Hahnemann Memorial on the eastern edge of Scott Circle often goes overlooked in a city full of such memorials, but its dedication to an intriguing German physician named Dr. Samuel Hahnemann and its outstanding design elements should make it a summer destination for residents and visitors alike.  After all, not many of this city’s memorials and statues were actually designed to be sat upon.

Its dedication took place on June 21, 1900, the culmination of nearly ten years of committees and the donated funds from 2,500 persons throughout the world whose names were planned to have been inscribed in its granite base.  Hahnemann (1755-1843) was a German physician who advocated homeopathic medicine, much to the consternation of pharmacists during his lifetime, since he argued that patients benefited from much smaller doses of drugs than were customarily prescribed.

The life sized bronze sculpture of Dr. Hahnemann and accompanying mosaic were created by Charles Henry Niehaus, an Ohio native born of German parentage.  Born in 1855, he was a graduate of the Royal Academy in Munich, after which he returned to New York in 1885 to establish his studio.  He had won a contest for the commission, beating 30 sculptors who had submitted designs.  He had worked on the likeness of Hahnemann from a bust by David D'Angers, now in the Hospital St. Jacques in Paris.   Following his work on the Hahnemann memorial, in 1912, he witnessed the dedication of his sculpture of John Paul Jones at Independence Avenue and 17th Street, N.W.

The architect of the white granite base, which includes a Greek exedra, or curving bench, was Julius F. Harder.  He had been born in 1865 in New Haven, Connecticut, and moved to New York in 1886 to work as a draftsman and to pursue studies in the sciences; only three years later, the Architectural League of New York awarded him its gold medal.   In the early 1890s, Harder was employed by the famed World's Fair in Chicago.

Dr. James H. Mc Clelland of Pittsburgh first proposed the monument at a meeting of the Homeopathic Medical Society in 1881, but finally persuaded the American Institute of Homeopathy to undertake the project in June of 1892.  The growing homeopathic community supported the effort, donating as little as 25 cents toward the effort, and as much as $4,510.00, given by physician Nancy T. Williams of Augusta, ME.   It was constructed by the United States Army Engineer Corps under the watchful eye of Colonel Theodore A. Bingham. 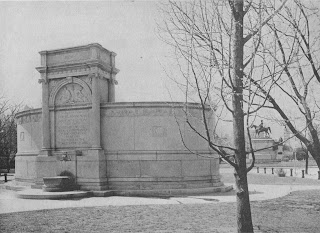 Christian Friederich Samuel Hahnemann, son of a porcelain painter, was born in Germany in 1755, and led an extraordinary life.  At the age of twenty, he was a thorough master of six languages, including German, French, English, Italian, Latin and Greek, and subsequently became proficient in Arabic, Syriac, Chaldaic and Hebrew.  His medical studies were pursued at Erlangen in the year 1779, and he  became a member of various scientific societies in Leipzig and other cities.

While yet a young man, he was made Surgeon-in-chief of the hospital at Dresden, and later was made Superintendent of the Insane Asylum at Goergenthal, where he inaugurated the mild and humane methods of treating the insane which prevail to this day.

In 1812, he was admitted to the Faculty of Medicine in the University of Leipzig, where he lectured for many years.  As a result of his daily experience and observation in hospitals, he became skeptical of the eras medical methods, and vigorously set forth his objections in the medical journals of the time, which brought the wrath of those in medical authority.  In particular, he theorized that many patients were simply over medicated. 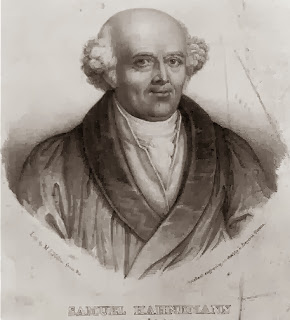 Hahnemann also came to the conclusion that “there was a constant relation between the action of drugs and the effects of disease on the human organism, and that this relationship consisted of a similarity of the drug effects on the healthy to those produced by disease in the sick” which laid the basis for the groundbreaking idea of treating disease in the human body with miniscule amounts of the disease itself, in order for the body to produce a resistance; today’s practice of immunization and vaccination.

His views at the time were not popular, however, mainly led in opposition by the pharmacists and doctors, both who stood to profit from the sale and administration of drugs.  Among other things, Hahnemann even experimented on himself with Peruvian bark!  In 1821, he was forced to leave Leipzig and live the remainder of his life in Paris.  It is said that people flocked from all parts of Europe to be under his care, and that his clientele included many of the noblest families of Europe.  He died there on July 2, 1843, at age 89.

Coined ‘homeopathy’ early in its years of formation, Washington had its own Homeopathic Hospital, located not far from the future site of the memorial, on the southeast corner of 2nd and N Street, N.W.  Among the proponents of homeopathy were John D. Rockefeller and Mark Twain.

The memorial itself is curvilinear, featuring the bronze likeness of Hahnemann in the center, under a domed glazed mosaic composed of the foliage and flower of the cinchona plant.  The statues base includes the inscription “SIMILIA SIMILIBUS CURENTUR,” or “ Likes Are Cured By Likes,” the founding principal of homeopathy and his law of similars.  The foundations and superstructure of the Monument were built of white granite from the quarries of the Maine and New Hampshire Granite Company.

The dates of erection appear across the center in Roman numerals and the dates of Hahnemann's birth and death, encircled with laurel wreaths, are inscribed to the right and left.  Below the inscription of Hahnemann’s name had been a fountain designed in the form of a fluted basin, fed by a stream of running water from a carved dolphin.

The statue itself, in standard bronze, was cast by the Gorham Manufacturing Company.  Commemorative bronze tablets were placed in two panels, on either side of the statue, representing in bas-relief the four epoch-making periods of Hahnemann's life: the nightly vigils of the student; the investigations of the chemist; the self-sacrificing experiments of the great discoverer; and to commemorate the brilliant success of his treatment of the typhus patients in the hospitals at Leipzig.

The Hahnemann memorial was rededicated by the American Institute of Homeopathy 100 years after its completion, on June 21, 2000, in which a campaign was begun to raise much needed funds for its repair.
Posted by HouseHistoryMan at 12:08 PM No comments: