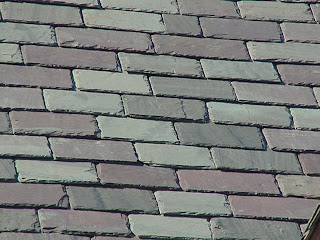 So while at a party over the weekend after being introduced as a historic preservationist, a new acquaintance complained how expensive it was going to be to replace their slate roof. Their contractor estimated $20-$25,000.

I told them to get another contractor. Why? Slate is hung on the roof with a single large hole and a nail; working from the top down, its easily lifted off the nail and can be carried and assembled on the ground while the sub-roof is replaced and the gutters renewed. You will loose about 10% to breakage, and you should plan on buying about 10-15% new slate for the reassembly....these new slate should be placed on a section of the roof themselves, as they are likely no to match the old slate exactly; just have them put on dormers or a small pitch of the roof.

If the old slate is painted or has roofing tar on it (gasp) like it was on my old 1879 house in Washington, it can be flipped over when it is replaced on the roof. It your roofer wants you to replace the entire roof of slate, run. They want to get the profit from providing new slate, and avoid caring for the old slate during removal. Its easier to throw the pieces off the roof than carry them down, yes? There is also faux rubber slate on the market that you can't tell is not real slate, even up close.

It can be quite difficult to replace the whole slate roof since it's heavy and bulky, and it's only used on historical buildings, which are quite dangerous to tread upon because of their age. It would be better if he can just repair some of the parts if the shingles are still in good condition.