The 1917 scandals and affairs of DC's builder Chester A. Snow

A successful patent attorney, Chester Ammen Snow also invested in building several apartment buildings in Washington, including the Holmes and the Irving at 3014 and 3020 Dent Place in Georgetown, built in 1902 and 1903, respectfully. He was a partner in the CA Snow & Co. firm along with Edward G. Siggers, and they maintained an office at 708 8th Street, N.W., adjacent to the Snow household. By 1910, the City Directory indicated that his partner had changed to an individual by the name of Clarence A. Doyle. Their advertisement from that year appears above.

Chester A. Snow was born in April 1844 in Virginia to Reverend Dexter and Catherine Snow. The family moved to Washington, DC by 1880, and lived together in a large house at 712 8th Street, N.W., by 1900. The extended family was enumerated there that year, and included the elder Snow, and Chester and his wife Clarissa (Parfet) Snow. She was also a native of Virginia, having been born there in 1870.

Chester was age 50 and Clarissa age 24 when they had married in 1894. They had one child together, Chester, Jr., in 1898, that would go on to head the C. A. Snow Company, which was already flourishing by the time he had been born. An announcement in the July 29, 1907 Washington Post indicated that the wealthy couple were going to depart for a round-the-world trip in September of that year, to include India, Japan, and Egypt. Clarissa died sometime between 1907 and 1910, possibly on the trip itself.

According to the census taken in 1910, Chester, then age 66, had moved into a house at 1818 Newton Street, NW, along with his niece Maud Emory, then a widow age 42. They were taken care of by two servants and a cook. Snow was a longtime leader of the Washington Humane Society, and made the Washington Post several times as a complainant in cases against residents using horses that were “old and unfit to work,” or forced up snowy hills without sand being used for traction (Washington Post, January 20, 1905).

However, Snow began courting a 36 year old resident named Addis M. Hubard in early 1913, and the two were married on July 29th of that year (Washington Post, July 25, 1914). They had a son named Dexter Hubard Snow on July 25, 1914, who had been born in Europe, where Addis had remained following their extended Honeymoon.

Their marriage lasted just three years, however, as first reported in the January 23, 1917 issue of the Washington Post, that they had been separated since November of 1916. Their sensational divorce trial, which revealed an intimate relationship between Snow and his niece Maud, made headlines for weeks throughout the ordeal, and was no doubt the subject of much gossip in the city’s social circles. Testimony even included many love letters written between all three parties. Custody of Dexter was the focal point of the trial. It likely did not help matters that Chester Snow hit and injured an 18 year old child named Harvey Magner, playing near his office on 8th Street, NW, during the trial.

Addis claimed that their “love died on the honeymoon,” and that she was prevented from entertaining guests in their home, denied use of their automobile, and “never treated as a wife.” Snow countered, of course, and alleged that their “honeymoon was spoiled because of his bride’s nervousness and spells of hysteria.” In the end, Addis was granted custody of the child, and both received a divorce.
The trial also shed light on the financial success of Snow, who his second wife estimated as being worth $2 million. He also owned a farm property coined Fenwick, near Woodside, Maryland. 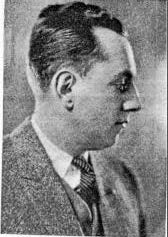 Chester A. Snow, Jr., took over the C.A. Snow Company following an education at the University of Pennsylvania and The George Washington University, and it became exclusively involved in the real estate business. He had begun working there in 1916. Seen at left, he married Enid Sims on February 19, 1923.

Copyright Paul K. Williams
Posted by HouseHistoryMan at 11:37 AM