Is This The Smallest House in Washington, DC? 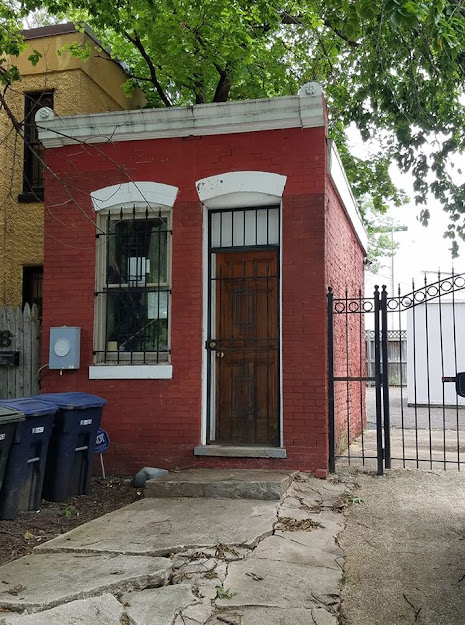 Have we stumbled onto the smallest house in Washington, DC?  Measuring just ten feet wide by sixteen feet deep, and only one story in height, we certainly think so - it's a mere 160 square feet!

The one room house on Capitol Hill, now an apartment under renovation, is located at 302 12th Street, SE.  At first glance, it appears connected to a house next door, but it is an independent structure.  Intrigued, I located the original building permit that was issued to J. A. Clark in 1912 for a “coal office.”  It provided the measurements and the cost to construct – only $150!

Researching a bit further, the 1914 City Directory listed Bernard A. McDonnell living in the adjacent house at 300 12th Street, a coal merchant.  It had been built in 1895 by Richard Rothwell, who rented it out.  McDonnell was new to the coal business.  In 1910, according to the census, he worked as a bartender in a saloon while he rented 510 B Street, SE.  He lived there with his second wife, Florence, whom he had married in 1903.  Both of his parents had been born in Ireland.

Earlier, he worked as a clerk, and according to the 1891 City Directory, he operated a restaurant at 1102 8th Street, SE.  It still exists today and was most recently home to Taco City DC (left).  In 1899, he was a bartender at 507 E Street, SW, a building since demolished.

McDonnell had been born on June 15, 1856 in Alexandria, Virginia.  He died in Washington DC on May 10, 1924 at the age of 67 and was interred in Mount Olivet Cemetery in that city.

Posted by HouseHistoryMan at 5:00 PM