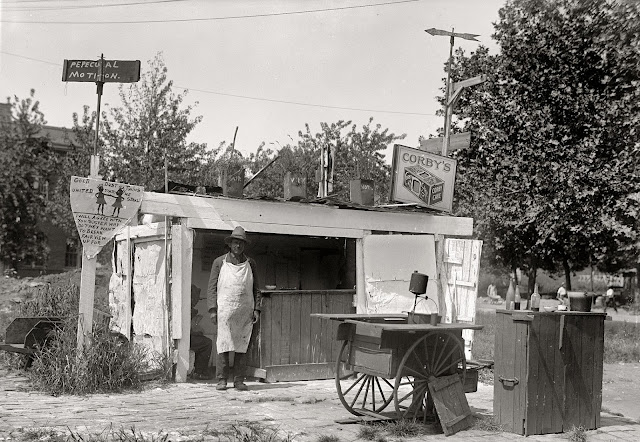 Then there was what was known as the ‘contraband camp,’ located on S street, between Twelfth and Thirteenth. The negroes who had just been freed stayed there waiting for white people to come and hire them. They got into all sorts of trouble, and many of them settled in the neighborhood. Money was scarce and whisky was cheap – a certain sort of whisky – and the combination resulted in giving the place the name which it held for so many years. The police force was small. There was no police court, and the magistrates before whom offenders were brought rarely fixed the penalty at more than $2. Crime and lawlessness grew terribly, and a man had to fight, whenever he went into the ‘Bottom.’

The unsettled condition of the locality made things worse. Men used to shoot reed birds where Corcoran street now is. I have caught many a mud turtle there in the 60’s. I saw a man get drowned in the creek at Seventh and R streets. At the point where the engine-house is now located on R street a man could catch all the minnows he wanted for bait. Tall swamp grass afforded easy concealment for any one who wanted to hide after a petty theft or the robbery of some pedestrian. Consequently, it is small wonder that the law was defied in those days.

A white man never wanted to cross the ‘Bottom’ after dark. If he did he had to keep stepping. Just how many crimes of magnitude were committed there no one can tell. The life of the negro was far from easy.

At times the trouble grew serious. I have seen 500 negroes engaged in a fight all at once in ‘Hell’s Bottom.’ That was during the mayoralty elections, and the riot would be started by the discovery of a negro who was voting the Democratic ticket” (Washington Post, February 4, 1900).

Sutherland rose to a level of prominence and relative wealth within his community, hanging a sign over his door that read “Mayor of Hell’s Bottom.”  He and his wife and four children lived at 1643 Vermont Avenue, NW in 1880.

By 1916, his stand had relocated after Hell’s Bottom was developed to the intersection of 1st Street and Florida Avenue.  He curiously had a sign painted on three tin buckets atop the stand that read “Fair-View-Hotel.”  Known as a famous colored philosopher, the stand was decorated with sayings, and Sutherland was always eager to offer advice and predictions to customers.  When threatened with closure in 1916, he presented the health department an eight foot long sheet of paper, signed by hundreds of neighborhood supporters.  He remained open.

Sutherland resided at 104 Seaton Place, NE, and eventually returned to his former neighborhood at 1640 11th Street, where he died in February of 1933.  His predictions and philosophical statements continued right up to his final days, as during his few months, Sutherland dreamed of a great voters' landslide for Franklin D. Roosevelt. The dream was so "clear" that he wrote Mr. Roosevelt a description of it.  Mr. Roosevelt responded with a "thank you" note saying he found the prediction "very encouraging."
Posted by HouseHistoryMan at 3:23 PM

Please note, it is not 1st street and FL NW, but rather NE. I believe there was a story on Keitt and this photo in the City Paper website a few years back. It was confirmed that the set up was NorthEast and not Northwest.