Drinking Away in the 1930s at the Washington Canoe Club 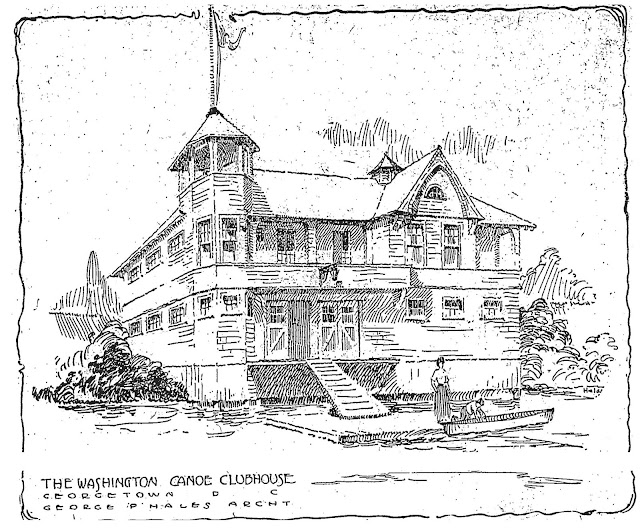 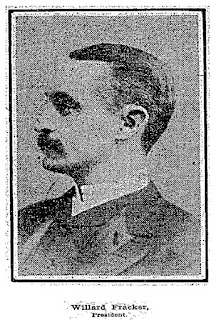 The Washington Canoe Club, built in single style architecture in 1905 along the shores of the Potomac River just north of the Key Bridge is one of the oldest operating sports clubs in the city.  It also pioneered the flat water racing as an Olympic sport, and continues to play an important role in Olympic sport.  In the late 1930s, however, it also had a drinking problem – more on that later.   The majestic building has survived flooding and several heavy ice jams that once moved the entire structure five feet down river.   It was included in the National Register of Historic Places in 1991.

Canoeing became popular in Europe in the 1860s and 70s, and the New York Canoe Club was founded in 1871.  The Washington Canoe Club was founded on August 1, 1905 with a gathering of its first 100 members at 1427 New York Avenue, NW.  Its first President was Willard Fracker.  Although it was originally planned to be on the Maryland side of the Potomac River, property was quickly secured at the end of M Street in Georgetown. 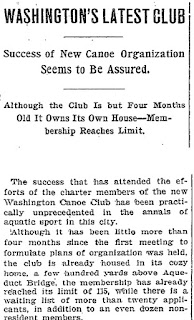 Architect George P. Hales provided the plans for the clubhouse, an illustration which appeared in the September 3, 1905 Washington Post seen here.  Hales was a recent arrival among canoeists on the Potomac, but he had been competing in the sport on the Charles River outside Boston for many years.  He designed the ‘house’ as it was called to be entered from M Street (then Canal) on the second floor via a bridge.   The second floor would contain a ballroom, lounge, smoking room, fireplace, locker rooms, bathrooms, a balcony and a corner turret for a flag pole flying the club pennant.   The entire first floor was designed with racks to store 125 canoes.   Construction commenced quickly, and a house warming party was held in the ballroom in December of 1905.  Ray Garrett was listed as its first Commodore.

Canoeists, We Have a Drinking Problem

Notes from the club’s October 20, 1938 meeting reveal that the gathering was the result of a “petition for a special meeting to discuss drinking in the clubhouse.”  Several motions were offered from the floor in an attempt to limit drinking during dances in the ballroom only, banning drinking from the ballroom, and allowing drinking everywhere else on the property.  A member named Mr. Havens revealed that the upper balcony “was never used by anyone, including the ‘better element’ who did not drink.”  Ouch!

Member Fowler stated that the club needed new members and significant renovations, and suggested that allowing drinking throughout the winter would attract new members, going so far as to recommend tearing down the kitchen walls, removing lockers, installing a stove and use the new found space for drinking year round.  The previous summer regatta was objected to by Fowler because “there was too much drinking and his friends did not like the appearance of everyone drinking beer all over the Clubhouse.”  He suggested a new club membership application be composed “to show the applicant was the type of man needed at the Club, but one who would object to drinking in all places.”
“Obnoxious drinkers” were brought up, although other members claimed to use the fireplace as a cozy and nice place for winter drinking without any such type present.  Suggested rules on where and when members could drink came from the floor until member McCalley wanted to know if the purpose of any new rule was to “prevent members from being seen drinking, or to prevent them from drinking.”

Member Havens took the time to point out that McCalley “was an exception, as he did not make highballs, but drank his drinks straight and in the locker room.”  He countered and said “the locker room is cold, and after drinking there the fireplace would bring out the liquor with bad effects.”  Member Snell remarked “that if we were all good members, we wouldn’t throw our cigarettes on the floor.”

Member Moffatt “reminded the meeting that we have a rule that states we must be gentlemen at all times.”  Member Dilger “stated that in his opinion the last dance he attended was one of low caliber, with drinking all over the clubhouse and that he did not bring a girl over to the dance…and that there was a need for dignity at the Club.”  The meeting was adjourned without a vote.
Years earlier, the club had similar meeting concerning the appropriate dress of members and guests, or the lack thereof.   That will be saved for a future blog post!

Posted by HouseHistoryMan at 5:12 PM