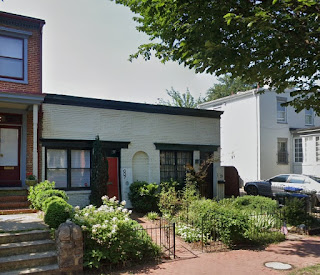 The owners of the vacant lots where 605 (right) and 607 (left) Constitution Avenue were to be constructed, Filippo Di Bella and Letterio Ciatto, applied for and was granted an Application for Permit to Build numbered 1385 for their construction on September 22, 1915.  They listed architect A. C. Spaulding as responsible for their design, and themselves as builders.  They were both built at a cost of $2,500.  Di Bella had purchased lot 15 a short time earlier, on September 14, 1915 for $3,700; he immediately sold the eastern half to Ciatto.  Di Bella had constructed 605 Constitution as a barber shop for his son-in-law.

The building permit indicated that the two buildings were to be constructed on solid land atop a foundation composed of concrete.  They would initially measure 29 feet wide by just 20 feet deep, but were later expanded when it was converted into residential use.  External brick walls were to be thirteen inches thick, the roof was to be composed of tin, and they would be heated by stoves.  The original configuration featured a shared, central opening between the buildings for access to the alley.  When built, the houses had the address of 605 and 607 B Street until the name was changed in the early 1950s. 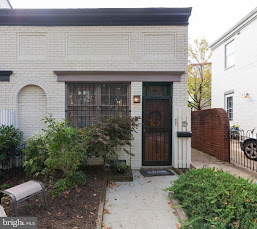 Owner and builder Filippo Di Bella constructed the building at 605 Constitution as a location for his son-in-law’s barber shop.  He himself indicated that he was a carpenter and resided at 1931 8th Street, NW, according to the city directory.

Fillipo Di Bella had been born in Italy about 1868; his wife Frances was born there about 1877.   Their daughter Louise had been born in Argentina on August 4, 1898, and they immigrated to the United States in 1903, according to the 1903 census when they resided at 1931 8th Street, NW.  Di Bella indicated that he worked for himself as a house carpenter.

Daughter Louise married Anthony Joseph Chirieleison who operated the barber shop out of 605 Constitution Avenue.  He had been born in Messina, Italy on June 7, 1895 and immigrated on June 8, 1903.  They had a son named Joseph (born March 26, 1920) and a daughter named Jane (born December 28, 1922).   Anthony had entered the Army on May 3, 1917 shortly after his barber shop had opened; he was Honorably Discharged on March 6, 1919, according to his Military Naturalization paperwork seen here.  The extended family resided at 1239 H Street, NE when they were enumerated in the 1940 census, seen here.

While Anthony Chirieleison was away in the Army, the structure at 605 was rented to Goda Norman, according to the 1917 City Directory.  She neglected to list an occupation or business type.  In 1920, the structure was listed as vacant in the Directory, which reflected information collected a year prior when Chirieleison was still in the Army.  607 housed a grocery store.  In 1925, the storefront at 605 was rented to a shoemaker named Paul Stanton, who was again listed there in 1930.

Filippo Di Bella died on November 26, 1944.  His widow Frances, under the Will of Filippo, sold 605 Constitution Avenue on December 12, 1947 to Paul L. Mandolia, seen here in his shoe making and repair business that operated from the location (below).  This rare photograph was included on their family tree, posted by his grandson Ray Campagnoli.[1]  He had rented and run a shoe making shop at the address as early as 1935, according to the City Directory.  He and his wife Josephine resided close by at 614 Constitution Avenue. 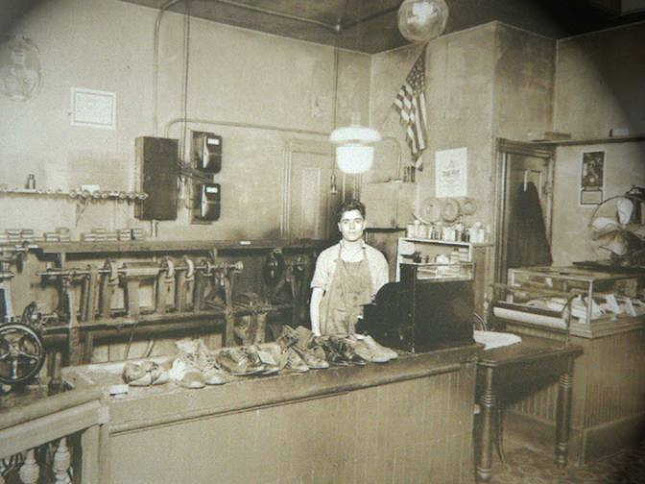 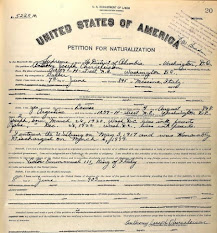 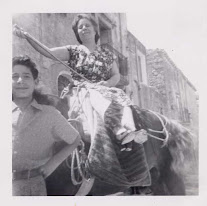 Mendolia died in Washington, DC in July of 1981 and Josephine died in August of 1985.  In 1960, the structure housed “Paul’s Shoe Repair,” while also housing Antonio and Joseph Cichello as residents, according to the Haines Directory.  The 1994 Directory lists Leo Demesaker as a resident.

This continues our series on tiny houses, with previous entries on 233 12th Street, NE and 302 12th Street, SE.

[1] Picture and information from Christine McDonald family tree on Ancestry.com.

Posted by HouseHistoryMan at 3:14 PM