From Mansion to Apartment: the Saunders Mansion at Wyoming and Connecticut Avenues


The Washington city landscape began to change dramatically after the turn of the twentieth century, as newly built apartment buildings began to replace mansions and estates situated on valuable urban property and large city lots.  One such example of this is the razing of the Saunders mansion in the late 1930s that had stood on the prominent northwest corner of Connecticut and Wyoming Avenues since its construction in 1890.  The site today is occupied by the art deco styled apartment building at 2100 Connecticut Avenue.
The Saunders mansion faced south onto Wyoming Avenue, with a large corner turret at the intersection of Connecticut Avenue.  It was built beginning in June of 1890 to the designs of architect Robert Stead for owner Lorin M. Saunders.  It cost an astonishing $12,000 to construct, and was built measuring 41 feet wide by 63 feet deep.  Its address was 2101 Wyoming Avenue.

Architect Robert Stead was first listed in the City Directory as a draftsman in 1876.  Stead was first listed as an architect in 1883 when he was hired by Susan Okie to design a townhouse at 1714 N Street, NW.  He also designed the house at 2026 Hillyer Place, NW in 1887.  He retired in 1923, and died in Philadelphia twenty years later at the age of 87.

Owner Lorin Maxson Saunders made a fortune in his legal practice, real estate development, and in banking.  He had been born on November 2, 1840 in Leon, located in western New York’s Cattaraugus County.  His parents were William Saunders and the former Parmelia Marsh.  After teaching school for a short period, he was known to have left the rural enclave with a mere $30 in his pocket to seek fortune in Washington, DC, obtaining employment at the Treasury Department from 1864 to 1865.

Soon after, he obtained his law degree from the Columbian University (The George Washington University today), and retired from government service in 1870.  His personal fortune that year was estimated as $5,000 in the federal census.  In 1881, Saunders realized that great profits could be realized from real estate development in this city, and he opened a real estate company at the corner of 11th and F Streets, NW (below). 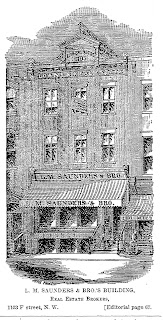 Saunders had begun building wood frame houses in Southeast Washington in the late 1870s, and along Euclid Street, NW in the 1880s.  He developed those found at 1 to 9 Florida Avenue, NE in 1890.

His first wife, the former Mary C. Green, died in November of 1882, and Saunders eventually married her sister Julia in 1889, with whom he had a son named Fenton.  He was born in April of 1892.  The family resided at 2101 Wyoming along with three live-in black servants, according to the 1900 federal census.

Like many other successful agents of the era, he soon became involved in the banking business a short time later, establishing the Ohio National Bank on the corner of 12th and G Streets, NW, and becoming director of the Washington National Building and Loan Association of Washington.  He later served as President of the Washington Savings Bank in 1899.

Saunders was forced to retire from his many business pursuits in 1904 due to complications from Bright’s disease that eventually claimed his life at 3 pm on May 15, 1905 in his residence.  He was buried in Oak Hill Cemetery.

The mansion was sold a short time later to former US Senator from Maryland, Louis Emory McComas (1846-1907).  McComas was born near Hagerstown, Maryland. He attended St. James College in Maryland and, in 1866, graduated from Dickinson College in Carlisle, Pennsylvania. In 1868, after studying law, McComas was admitted to the bar and began practice in Hagerstown.

In September 1875, McComas married Leah Humrichouse and the couple had two daughters.   He married Mrs. Hebe Muir in 1907, following the death of his first wife.  Unfortunately, he contracted pneumonia on a European honeymoon and died of heart failure at the mansion on November 10, 1907. 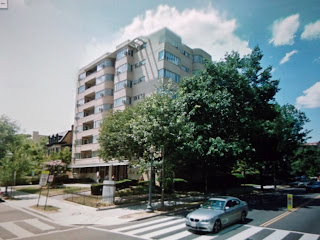 Incidentally, his granddaughter, Katharine Byron, and great-grandson, Goodloe Byron, have also represented Maryland the U.S. Congress. After the Saunders mansion was torn down in the late 1930s, it was replaced by an apartment building built beginning in 1940 that was designed by noted architect Joseph H. Abel (left).  It was built at a cost of $350,000, and today houses the popular restaurant Pines of Florence on the ground floor.