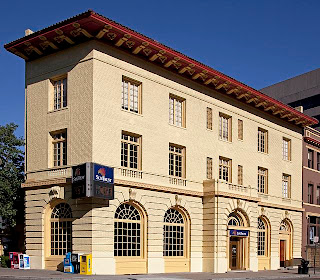 This is the story of two really, really close sisters who once owned adjoining and interconnecting houses on Dupont Circle form several decades.

The bright yellow Sun Trust bank building located at the corner of Connecticut Avenue on the south side of Dupont Circle has been providing time and temperature for local commuters for decades.  Its recent lavish paint scheme unfortunately covers what was a highly ornamented brick pattern designed into the building when it was built in 1912 (seen below).  It replaced one half of an unusual double house originally built on the site in 1880 for two apparently very close sisters.

The U. S. Trust Company hired architect Jules Henry De Sibour to design the corner bank building, which began construction in September of 1912.  It was built by the F. J. Nesbit Company at an estimated cost of $50,000 and featured a complex design of different colored bricks with granite trim and a clay tile roof.  It later became the Dupont National Bank Building, pictured here about 1925, and the Guardian National Bank, along with other institutional names in subsequent years.

The pair of adjoining houses previously located on the site, at the intersection of Massachusetts and Connecticut Avenues facing Dupont Circle, had been built beginning in March of 1880.  Built for two sisters, Charlotte E. and Katherine Wise, it is unusual in that each of the three levels shared balconies facing Dupont Circle, one on each floor, with each having doors that led to each individual house.

The adjoining houses, however, were each built with separate building permits at an estimated cost of $9,000 each.  Two years after they were completed, the owners no doubt stood on the balcony to watch the unveiling of the Admiral DuPont statue in the center of the circle on December 10, 1884.

This arrangement might have decreased future resale value in today’s market, but it allowed the sisters to interact and pass into each others houses without having to venture outside.  The sisters were the daughters of Capt. H. A. and Charlotte Everett Wise.  The homes were designed by architect J. Cleveland Cady (1837-1919) of the Cady-Gregory firm in New York.  Cady was a student of Henry Hobson Richardson, the leading architect of the post Civil War era in the country, and is perhaps best known for his Metropolitan Opera House design.  The houses were built by Robert I. Fleming.

The Miller house had an address of 1347 Connecticut Avenue, and was the home to Lt. J. W. and Katherine Wise Miller.  It was replaced by the bank building in 1912, which was built rather awkwardly adjoining and dominating over the remaining half of the double house for the following thirty years (as seen in the picture).

The Hopkins House had an address of 1826 Massachusetts Avenue, and was home to Col. Archibald Hopkins, and his wife, the former Charlotte Everett Wise.  They had married just prior to the home’s construction, on November 14, 1878.  Their house remained standing until 1948, despite the construction of the bank that replaced the Miller house.  It was replaced by a parking lot, but is today the location of the Sun Trust bank building rear expansion.

Archibald Hopkins had been born on February 20, 1842 in Williamstown, Massachusetts.  His father, Dr. Mark Hopkins, served as a professor and President of Williams College for most of its early history.  Archibald graduated from Williams, and entered the Union Army in 1862, at the young age of 20.  He served under Ulysses S. Grant at Appomattox, and quickly rose to the rank of Lieutenant Colonel.

They moved to Washington, DC following the Civil War, when he became an officer under the Reconstruction Acts, and eventually earned a law degree from Columbian Law School (The George Washington University today).  He served as the Chief Clerk of the United States Court of Claims, and authored a book entitled The Apostles’ Creed.

In 1882, Hopkins commissioned the architectural firm of Hornblower and Marshall to construct the Everett apartment building on H Street, between 17th and 18th Streets, named after his mother-in-law’s family surname.

Posted by HouseHistoryMan at 2:18 PM

omg. and now the bank is that hideous shade of yellow?! take the paint off!!!!