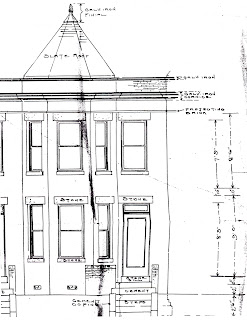 Over the twenty years that I’ve been researching historic houses in Washington, DC, I find that in only about 15% of the cases do we discover the original blueprints have been retained with the building permit: some are the coveted façade drawings, and some are the even more rare floor plans. 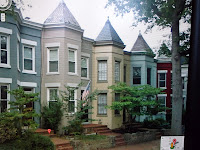 We recently discovered and even more rare occurrence: both façade and floor plans for a client in the 1500 block of E Street, SE.  They were thrilled to discover how their first floor had originally appeared.  It solved many mysteries for them.
The owners of the vacant lots where 1502 to 1518 E Street, SE were to be constructed, Wilhelm Schmidt and Frederick D. Brandt, received their building permit on May 17, 1906. 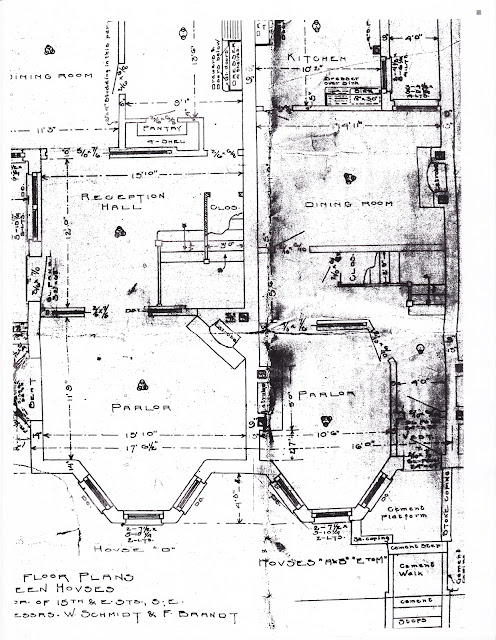 You might recall that we composed a blog entry for grocer Wilhelm Schmidt here, who ran a grocery at the corner of 18th and T Street, NW, today home to Rosemary’s Thyme restaurant.

The floor plans revealed that a Latrobe Stove was inserted into both the front parlor and the dining room fireplaces, and that the kitchen featured a coal range, sink with cabinet overhead, and a built in wall cabinet with upper glass doors and lower wood doors and drawers on the party wall.

Architect Benjamin Franklin Meyers (1865-1940), known as B. Frank or BF Meyers, contributed many row houses and theaters to the Washington, D.C., area.  Meyers was born in 1865 in Nazareth, Pennsylvania.  He moved with his family to Washington, D.C., as a child and attended school here.  He also received his architectural training in Washington, D.C., not through an educational institution, but likely through his father, John Granville Meyers, a local builder and architect.

Are "Wardman" rowhouse architectural plans commonly available anywhere? I was interested in doing a porch repair, and was wondering how the porch of my 1920 house was constructed, especially how it connected into the brick piers of the porch.

Interesting....if they are not with your own permit, you could find other houses like yours and look up their permit, but most will not offer plans or facade drawings. You or your architect could locate others similar to your house to creaet measured drawings.