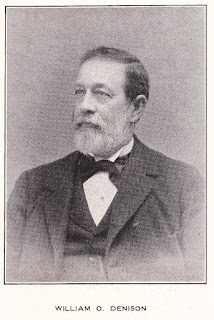 Developer W.O. Denison, as he was known, was responsible for developing the Northeast Washington suburbs known as Metropolis View and South Brookland out of the Edgewood estate beginning in the 1880s.  He had been born on March 15, 1832 in Elmira, New York.  He graduated from Dundee Academy in Dundee, New York, and immediately established a printing business in that town.
He moved to Cleveland, Ohio for the opportunity of printing the city’s first city directory.  He then moved to Louisville, Kentucky, where he established and ran the Daily Courier newspaper until 1862, when he moved to Washington, DC.

Denison maintained a real estate and insurance office at 923 F Street, NW, and in 1891 briefly formed a partnership with James W. Sands known as Denison & Sands.  Like many in the real estate business at the time when Washington was rapidly expanding, he was the subject a several lawsuits and allegations of hiding profits from purchasers, sellers, and fellow real estate brokers.

Denison had married twice, the first time on July 7, 1857 to Georgia Carr, the daughter of Judge Wyatt Carr of Cleveland, Ohio.  She died about 1899.  His second marriage was to his cousin, Miss Georgeana Booth Armstrong, the widow of Col. Armstrong and the daughter of Edwin Booth, at one time the editor and proprietor of the Columbia Times newspaper in Cincinnati, Ohio. 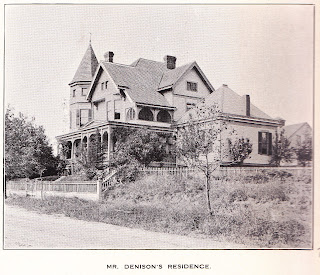 In Washington, William and his first wife resided in 1890 at 2020 R Street, NW, but the following year, they moved into his own Metropolis View development in a house (left) at the corner of 7th and Galena Place (now Girard) Street, NE (later 2900 7th Street, NE).  It has since been razed.

The area where 2815 6th Street exists today is shown on the 1887 Hopkins Map, below, where one would extend 6th Street to the upper right of the map, just above the Chase estate coined “Edgewood.”  An 1888 “Act to Regulate the Subdivision of Land Within the District of Columbia” mandated that newly plotted lots maintain the grid and alphabetic system found within the original boundaries of Washington, which then lay south of Florida Avenue. 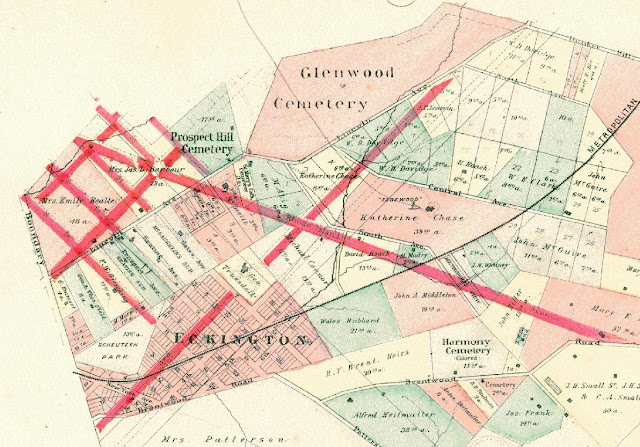 The Edgewood neighborhood, outside the original boundaries of Washington City, was originally part a 30-acre farmland estate called Metropolis View, then part of Washington County, Maryland.  In 1863, Salmon P. Chase, then U.S. Treasury Secretary under Abraham Lincoln, purchased the estate and added another 20 acres of land nearby, built a mansion, and renamed the newly expanded estate Edgewood.

The mansion itself was at what is now the corner of Edgewood and 4th Streets NE. When Chase died in 1873, his daughter, Kate Chase Sprague, moved onto the crumbling estate and lived a reclusive life with her mentally challenged daughter, farming pigs until she died in poverty in 1899.  In the 20th century, the house belonged to the St. Vincent's Orphanage Asylum and Catholic School, the largest orphanage for girls and a coed school.

In 1893 an Act of Congress offi­cially extended the street plan of old Washington City, as designed by L'Enfant, to what is today the entire District of Columbia.  A straight grid pattern was imposed on the com­munity, and older roads were shifted, straightened, and widened, erasing much of the early physical identity of Edgewood.  However, it is still possible to find remnants of the older roads in several blocks and alleys that follow the original land owner boundaries seen on the 1887 Hopkins map.

In the meantime, William O. Denison had purchased and begun to slowly develop two suburban tracts he called Metropolis View and South Brookland.  He had obtained a plot division in April of 1891.  Street names were originally called Keokuk, Joliet, Indianapolis, Hartford, Galena, Frankfort, and Emporia Streets.  These were later changed to Kearney, Jackson, Irving, Hamlin, Girard, Franklin, and Evarts Streets, respectively.  One unnamed street was later named Edgewood Street, and the streets from 5th to 8th Street remained the same.  The first and only house located on the 2800 block of 6th Street, NE would be that at 2815 6th Street, which he had built as a rental investment in 1891.

2815 6th Street would remain the only house on the block, in fact, for many decades to come.  It wasn’t until September of 1923 that 2834 6th Street was built for Charles A. Walden, Jr., at a cost of $6,250.  It was designed by architect Russell H. Lewis.
After his death on October 31, 1906, a lawsuit was filed against the Denison estate by twenty shareholders of the Metropolis View Syndicate, claiming that he had informed them that the initial cost of the land was $117,000, on or about April 1, 1890.  They had investigated and discovered that Denison had only paid $80,000 for the land, and they sought to retrieve the $37,000 difference from his estate.

The Baist Map updated to 1942 can be seen below.
Photos and Text Copyright Paul K. Williams 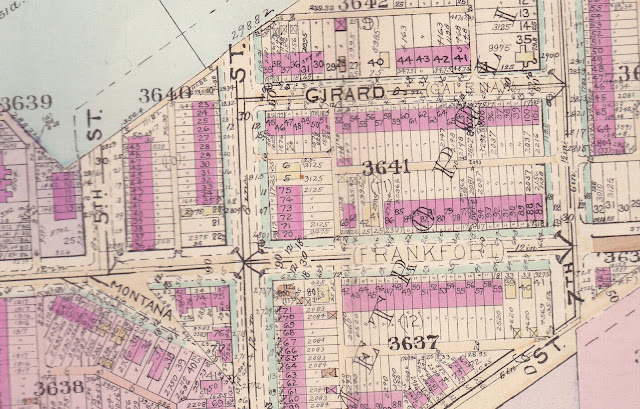 Posted by HouseHistoryMan at 2:20 PM

I have lived in Edgewood for around 3 years...this post offers some very interesting information about the area!