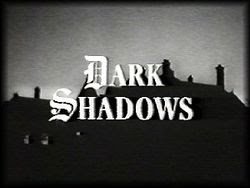 With the opening of Dark Shadows in theaters this week, we take a look at a direct link to the soap opera of the same name and a Washington, DC mansion relocated from Dupont Circle to Newport, Rhode Island.

On rare occasion, the history of a house can link even the most bizarre and farfetched of events, people, and places that one can possibly imagine.  Would you believe someone that told you that on the very site of the southern escalator entrance to Dupont’s Metro station, a mansion once existed that could directly connect all of the following: a summer mansion in Newport, RI, Spanish stained glass from the sixteenth century, Kentucky “Old Crow” whiskey, the Episcopal Bishop of New York, the first real ‘home theater,’ a televised soap opera featuring vampires, the invention of the telephone, and alleged ghosts roaming the halls of Salve Regina University?  Incredible as it seems, it’s true.

A mansion that begins these intriguing connections had first been built in the 1870s upon the large triangular lot facing Dupont Circle between Connecticut Avenue and Nineteenth Street by the prominent Galt family, today the site of the Dupont office building.  It was sold in the early 1880s to Gardiner Greene Hubbard, whose daughter Mabel married Alexander Graham Bell, inventor of the telephone.  In March of 1907, the house was sold for an impressive $166,500 to millionaire Edson J. Bradley and his wife Julia.

Bradley was enumerated in New York City in 1880 as a clerk in a wine store, but his fortunes would soon change.  Bradley, born in Illinois in 1852, became involved in the whiskey business in Frankfort, Kentucky, and by 1887 he became President of the W.A. Gaines Company, also known as the "Whiskey Trust."  Brands included Old Crow and Old Hermitage, and the company was the largest producers of fine "sour mash" whiskeys in the world.

Bradley had good timing, for in 1880 the average American adult consumed 2.4 gallons of hard liquor annually.  Modeled after Standard Oil, the Whiskey Trust was bona fide trust so that when a distillery joined the trust it surrendered control of its operations to a board of trustees. Of the 86 distilleries that eventually joined the trust, only about 10 were kept in operation; the remainder were shut down. At its peak, it enjoyed 93% of the market share.  Perhaps surprisingly, given its large market share, in January 1895 the trust entered receivership due to low cost competition, but Bradley had already made millions.

Edson Bradley was a well known member of the Washington society and was often mentioned in the pages of the local newspapers.  He owned homes in New York and Tuxedo Park, and an apartment at the Stoneleigh Court in Washington.


In 1907, Bradley hired architect-to-the-wealthy Howard Greenley (1874-1963) to completely remodel and enlarge the Dupont Circle mansion at a cost of $100,000.  A driveway through the house separated domestic service apartments from gracious entertaining and new living quarters for the Bradley’s, including a library, large ballroom, and oratory.

The house was expanded again in 1911, with the addition of a private, 500-seat theater for the Bradley’s to host live productions for their guests.  They called it “Aladdin’s Palace.”  Social columns written in 1908 claimed that Mrs. Bradley denied the existence of the theater, not wanting to boast about their opulence, in what must be the first home theater of its kind in America.  The mansions 16,000 square feet incorporated complete rooms of wood paneling, plaster ceilings, and artwork from Europe’s most impressive castles and estates, and was filled with antique furniture, artwork, rugs, and china.  A rare photo spread of the interiors appeared in the January 22, 1922 edition of the Washington Post.

Just 16 years after its completion, in 1923, Bradley again hired architect Greenley to create a plan to disassemble large portions of the exterior and most of the antique interiors of his Dupont Circle mansion in order to remodel and enlarge yet another mansion, this time located seaside on Ruggles Avenue in Newport, Rhode Island.  He had purchased a mansion coined Edgewater from James Frederick Kernochan that had been built in 1864.

When the work was complete, there were 17 rooms on the first floor, 25 on the second, and 12 on the third, all built at a cost of $2 million dollars. Curiously, the house was built with three separate attics, all containing peep holes used during parties so that domestics could catch someone stealing or misbehaving at the grand parties. A large pipe organ was concealed in a secret room, the sound of which could be heard in the adjoining chapel, but access to the room itself was only through a second floor trap door.

The American League of Architects awarded Greenley the League’s President’s medal in 1947 for the resulting mansion, then transformed into a sprawling French Renaissance manor house, one of the last of the immense Gilded Age summer palaces to be built in Newport, and one of the last to continue to be privately owned.  It was opened for the 1925 summer social season and called “Sea View Terrace.”

Newspaper accounts reveal that not much was left of the Bradley’s Dupont Circle mansion by 1926, which lay in ruins.  His wife Julia died in the Newport mansion in 1929, and Edson Bradley died of pneumonia in London in 1935.

The Bradley's daughter, Julia Bradley Shipman, took over the estate and lived there until the late 1930s with her husband, Rt. Rev. Herbert Shipman, Protestant Episcopal Bishop of New York.  The home was used during World War II as Army officers’ quarters, but Julia neglected the property and failed to pay taxes. In 1949, it was sold for only $8,000, a fate shared with many other Newport summer "cottages." 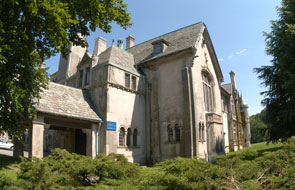 From 1950 to 1974, the estate became an exclusive, all-girl summer high school and was renamed "Burnham by the Sea," which was owed and run by Mr. and Mrs. George Waldo Emerson.

From 1966 to 1971, the exterior of the mansion was used for the exterior shots and credits for the fictional Collinwood Mansion on the soap opera series Dark Shadows. The Gothic horror soap still has a cult following with both Madonna and Tim Burton as declared fans.  It became hugely popular when a year into its run, the script introduced vampire Barnabas Collins, played by Jonathan Frid.  Other characters included vampires, werewolves, ghosts, zombies, man-made monsters, witches, warlocks, time travel, both into the past and into the future, and a parallel universe.

In 1974, Martin Carey of New York purchased the estate and renamed it the Carey Mansion. Restoration commenced soon after, but due to enormous costs for upkeep, the third floor and most of the second and first floors have been leased to Salve Regina University.  The second floor in the south wing is maintained as the Carey family's private residence, which is used chiefly in the summer months.

Cecilia Hall, named for the patron saint of music (Saint Cecilia), refers to the music chamber in the old Bradley mansion, which is used by the school for performances and practice.  With centuries of assembled architectural details and complete rooms moved from Europe and Washington, as expected, students often tell tales of strange hauntings and ghosts roaming its many corridors.

It would be wonderful is someone would publish online the floor plan of Carey Mansion, or at least the plans as they were originally. It would also be nice if a floor plan were available for the "Old House" that burned. The latter would be a less ambitious project, since the Old House in fact only had 14 rooms.

I am assuming that the reason the floorplan to Carey mansion is not public is that the Carey's privacy may already be too compromised as it is.

The only clue to the floorplan of the Old House (other than the placement of the chimneys (seen from outside), is the picture of Jonathan Frid costumed as Barabas Collins that was taken inside the House. The other pictures I have seen are all on the porch near the port-cochiere, or at the Southeast corner. The interior picture shows that the room connecting to the front door (by the port cochiere) was very large, and roughly L-shaped. This was at the southeast corner of the house. Along the part of the L that ran directly away from the front door was the open staircase, reversed from the position on the Old House set. To the right of the front door is a bay window, just as on the set

My condolences to the Carey's for the invasions of their privacy, which eventually led to the posting of the "No Trespassing" sign on the south-east corner of the lot.

As of 2011, Salve Regina has not leased any space in Carey Mansion, and the restoration of the roof has been underway for a while, along with the interiors.

The house that was owned by James P. Kernochan was called "Sea View", not "Edgewater". That is where the current name "Seaview Terrace" comes from. I know the Careys and visit them every summer. I also have documentation to prove the actual name.