The site of the Kennedy Recreation Center, which opened in 2003 along 7th Street between O and P Street in Shaw, has a long and rich history with myriad uses in its past that have been uncovered that range from orchard farming to rowhouses, open markets, schools and recreational facilities.  The block was also home to the Central High School from 1882 to 1916.

A man by the name of John Saul first rented the entire Square from owner W. W. Corcoran beginning in late 1852 for use as a planting nursery.  His plantings included a variety of apple, cherry, plum, and peach trees, in addition to several rows of grapes. He also grew large evergreens, Norway spruces, Japanese and Chinese arborvitae, and Japanese maples and shrubs for his growing landscaping business.

Following the destruction of the Northern Liberties Market in 1872 (located where the Carnegie Library now stands), the site operated as a temporary market space for those farmers and merchants awaiting the construction of the O Street Market, which opened in 1881.  The 6th Street side of the Square had begun to be built upon for residential purposes as early as the 1870s.

The Henry School was apparently the first building on the square, built before 1878, joined a short time later by the Polk School.  A Congressional appropriation in 1881 of $80,000 made possible the Central High School building that opened for classes the following year.  Interestingly, the funds had been gleaned from various lotteries authorized by Congress between the years 1812 and 1880.

The first commencement exercises took place in the building on June 12, 1883.  Architect Appleton P. Clark, who eventually design many houses in the immediate area, was part of the graduating class that year.  A north wing was added in 1890 that substantially enlarged the facility.

The first Principal of Central was Professor Paul, who met with a tragic and unexpected death shortly after he left his home at 2410 14th Street on March 31, 1888.  The Evening Star reported that he had been returning home riding his bike down the 14th Street hill when “he was thrown to the ground by one of Senator Cullum’s horses, ridden by a servant named James M. Chase…the man rode right over Mr. Paul, man and bicycle going over in one heap.  The man rode down the hill at full speed.  He did not appear to be attempting to check his horse, but was rather urging the animal on.”  Paul died a few days later from a broken back. 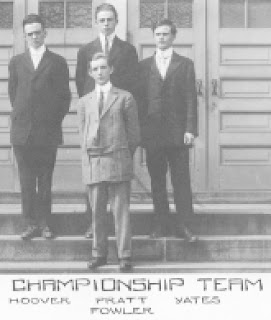 J. Edgar Hoover was perhaps its most infamous graduate, a member of the class of 1913 (right).  Dr. Alfred Sze Sao-Ke had graduated in 1897, and later became the Ambassador from China to the U.S.; his parents had been diplomats in Washington, which is why he ended up alum of Central.  Other distinguished graduates went on to become Military Generals, CEO’s, Professors, Bank Presidents, and a large and literal “Who’s Who” of Washington society for decades.

An alumni group of old Central published a brief history of the school entitled “Here’s to Old Central” in 1967 written by Bessie Whitford, a 1902 graduate (who returned to teach at the new location from 1918 to 1950).  At its O Street location until 1916, and at its Clifton location until 1950, the school graduated about 47,000 students

In 1916, students from old Central moved to the new Central High School Building at 13th and Clifton Streets, where it remained until 1950, when it was renamed Cardozo High School as part of the segregated black school system.

The old central school building became, in 1919, the first Americanization school in Washington, and continued there until 1924.  The structure then became the Columbia Junior High School, the first such ‘junior high’ school in the District.  In 1931, the building was turned over to the Abbott Vocational School, and operated as such until it became the Alexander Graham Bell Vocational School beginning in 1948.  The building was razed only days after it was abandoned on September 10, 1951 when Superintendent Hobart M. Corning asked for “quick razing to beat vandals who, he feared, might come close to tearing it down without benefit of wreckers’ contract.”

The demolition of the old Central High School was part of a city led plan in 1951 to clear the entire Square, including the 18 three-story row houses along 6th Street.  The only remaining building by 1952 was the Polk School, then used as a health clinic. 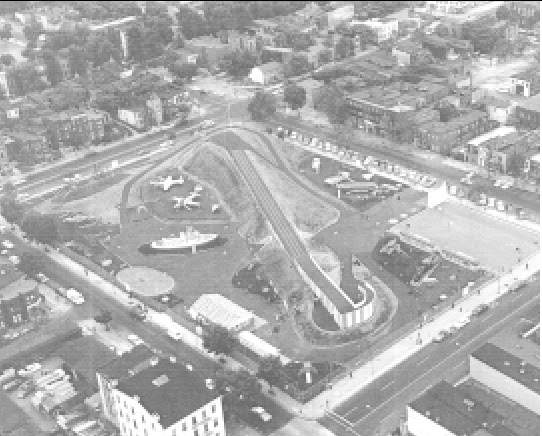 The city government went about transforming the site shortly thereafter into a storage facility for the police to store abandoned cars.  Ten years later, however, and effort was realized to transform the Square into a spectacular recreational playground.  The culmination of the dream of President John F. Kennedy and his brother Robert was a $500,000 playground with a variety of unusual features that opened on June 3, 1964.

Its usual playground features such as slides and swing sets were supplanted with items such as a 1888 steam locomotive that had once hauled bananas in Guatemala, an army tank from World War II, three trolleys, an amphibious craft, soapbox racing course, tugboat, two air force jet planes, a Marine obstacle course, and a fire engine.  The armed forces had supplied the abandoned military equipment.

It had cost the DC government $1.3 million, and another $109,000 per year to maintain the various features, used by 10,000 youngsters that lived within walking distance of the playground.  Its fate was sealed during the ongoing debate to find land for a new school to replace “Shameful Shaw” as it was named one of the top location possibilities in 1966, although never realized.  The equipment was removed and the site largely used for open field and play grounds.  Friends of Kennedy Playground began a successful effort to renovate the site and ensure that the new Kennedy Recreation Center was built and opened in 2003.

First off I would like to say excellent blog! I had a quick question in which I'd like to ask if you do not mind. I was interested to know how you center yourself and clear your thoughts prior to writing. I've
had a difficult time clearing my mind in getting my ideas out there.
I truly do take pleasure in writing however it just seems like the first
10 to 15 minutes are lost simply just trying to figure out how to begin.
Any suggestions or tips? Thanks! There are several excellent critiques there really is the following http://www.
ign.com/articles/2012/05/21/dragons-dogma-review and http://dragondogmareview.
com/ - generally lookin to assist!
Also see my webpage: swing sets for older kids