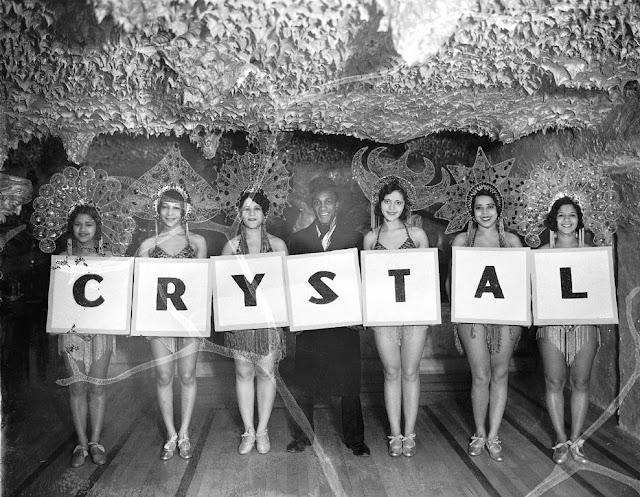 African American entrepreneur and banker John W. Lewis built the building on the northeast corner of 11th and U Streets, NW in 1922.  It housed a drug store on the first floor.  Only five years earlier, he had the Industrial Savings Bank constructed across the street, of which he was President and founder.

In the boom days from the 1920’s to the 1940’s, U Street was the entertainment capital of black Washington and within its corridors were myriad cabarets, jazz spots, supper clubs, dance halls, and cafes featuring the best African American artists of the day.  Operated as a prominent nightclub spot under a variety of names from its opening in 1926 to 1970, the basement at 2001 11th Street reached its zenith peaked in the late 1960’s, when it was known as the “Bohemian Caverns,” standing out as the doyenne of U Street. 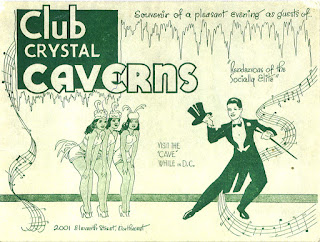 Its name resonated the theme of faux stalactites and stalagmites that continued as a dramatic decorative theme throughout the various incarnations of nightclubs that would occupy the basement over the next 60 years.

First opened as the Night Club Bohemia, the club was immediately patronized by black Washington’s elite citizens in formal evening dress.  Perhaps the best known of the modern “You Street” venues, the nightspot has had a succession of names, each of which appropriately resonant of a particular era. The name of the club changed from Night Club Bohemia to Crystal Caverns, sometimes billed as Club Caverns “the rendezvous of Washington’s Socially Elite.”  Later incarnations were a disco club coined the Cave and lastly as the Underground Cafe as late as 1970.

It was under the guidance of Tony Taylor, a jazz guru and entrepreneur and something of a legend himself, that the “Caverns” achieved its holy status as a jazz joint.  His club has subsequently been memorialized in recordings by artists Ramsey Lewis and Les McCann.  It is the appearances by Cannonball, Miles, Trane and Eric Dolphy that are remembered as defining moments in the life of a club whose final chapter was writ in the massive civil insurrection that marked the assassination of Martin Luther King. 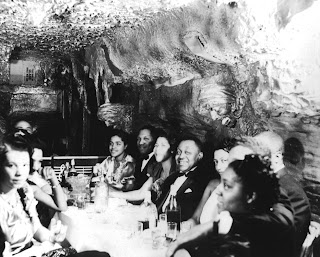 Evidence of the club's impact on developing jazz musicians can be heard on recordings made by the JFK Quintet, a group mostly comprised of Howard University students and alumni.  Harry MacArthur’s weekly column in the Evening Star called “After Dark,” on October 25, 1962 stated that Taylor “sports one of the more spectacular mustaches in the Metropolitan Area, says he hopes to keep the prices in a range that will not bankrupt and of his and Mr. Alvino’s patrons.  He promises a steak for $4.25, a lesser one for $3.25, and a lessor one than that for $1.50.  The kitchen for the club was then located in the rear portion of the fist floor, near the alley.  This made for easy access and departure of some of the city’s well known black Mafia who were known to frequent the club at the time.”


Mentioned again “After Dark” on December 9, 1965, a review stated that “Bohemian Caverns, that unusual watering hole at 11th and U Streets NW where you just might suffer a fractured skull if your much over six foot tall, has hit the proverbial jackpot.  Owner Tony Taylor was so enchanted a few weeks ago with an act he booked called Andy and the Bey Sisters that he has called them back to active duty for two more weeks.”

Relatively early in her career, world renowned performer Aretha Franklin played for several nights at Bohemian Caverns in the fall of 1966.  The October 22, 1966 “After Dark” column wrote “          No one laughs when Aretha Franklin sits down to play, or for that matter when she stands up to sing.  Instead, they yell, stomp their feet, whistle, and generally make a child’s final days of school seem like a funeral procession in comparison.”  Comedian Bill Cosby also headlined at the club, and singer Pearl Bailey often performed. 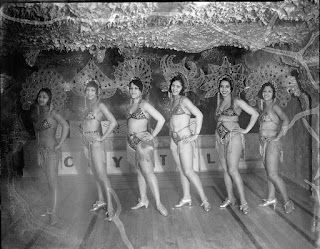 In December of 1966, renowned artist Miles Davis made his only Washington appearance the first week of that month at Bohemian Caverns.  It was a return visit, and at that time he worked with Jack DeJeanette on drums, Scott Hoak on bass, Wayne Shorter on sax, and Herb Hancock on Piano.  Patrons of the club during this era noted that about 60% of the clientele was white, venturing in from other areas of the city for the renowned jazz that was performed there.

If the mentions in the local newspapers are any indication of success, it appears that the years 1966 and 1967 were very popular for the club.  “The Bohemian Caverns, which seems to be trying to outdo itself with name attractions week after week in recent months, is still at it, it can be happily noted,” wrote John Seagraves on June 1, 1967 in The Evening Star.  Owner Tony Taylor was the first agent to discover and promote popular singer and local star Roberta Flack. 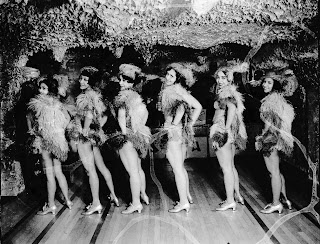 Taylor apparently operated the club only until the fall of 1968, months after the racial riots had devastated much of the neighborhood.  An occupancy permit was granted on October 28th of that year to new owner George Sherman Lee.  He coined the new “restaurant and public hall” simply as “Frank’s Cave.”  It was abandoned in 1970, and the building sat empty until 1998 when owners recreated and reopened “Bohemian Caverns” in the basement.

wow what a lovely pictures Hey i really like the nightclubs party out with friends thankyou so much for the blog i really appreciate your work..

Sadly Bohemian Caverns closed recently. We got to a few shows down below in the caverns before it did close. What a shame! I would think a DC celebrity or musician would scoop it up just for the history of the place.