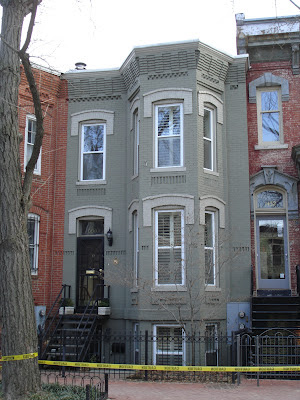 You never know what might be revealed when researching a house, and this was one of my favorites...which I first published the story in my Scenes of the Past column for the InTowner newspaper (July 2008).  Enjoy! 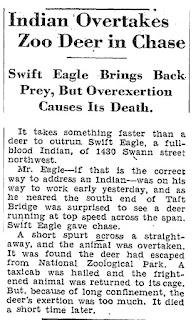 The owner of the vacant lots where 1422 to 1430 Swann Street were to be constructed, George E. Emmons, applied for and was granted an Application for Permit to Build numbered 812 for their construction on November 20, 1883.  At the time, the Street was known as Pierce Place, a name designation that would not change until 1910 when other streets were also renamed to conform to the city’s alpha-numeric street naming system.  1430 Swann Street appears above.

The headline of the article that appeared in the February 2, 1932 edition of the Washington Post, seen at right, no doubt attracted attention to the morning readers of the paper.  It documents a renter of 1430 Swann Street beginning about 1932 who was allegedly ‘a full blood’ Native American named Swift Eagle, who was apparently able to live up to his name.

Swift Eagle was better known in local amusement and vaudeville theaters as the drum-beating and chanting sidekick to a wrestler called Chief Thunderbird from British Columbia.  Eagle’s actual life, however, might have been far less dramatic, although it did include time spent in the DC jail.

Swift Eagle, his wife and son would rent 1430 Swann Street from 1932 to 1935.  He claimed to be either a half or full blooded Indian from New Mexico, but records show that he had actually been born in California. 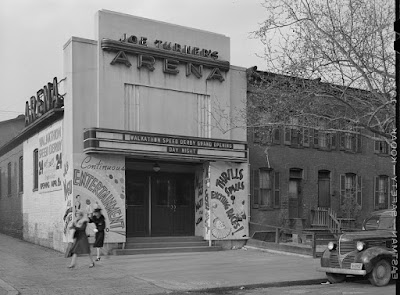 Swift Eagle and his wrestling partner, Chief Thunderbird, made headlines in Washington, DC beginning in October and November of 1937 when they were the feature attraction at the popular Joe Turner Arena, a 2,000 seat venue once located at the corner of 14th and W Streets, NW, seen at left in a photo taken by John Ferrell in April of 1942 (LOC).  Chief Thunderbird wrestled Cliff “Swede” Olsen on October 28, 1937, and won the match, pinning Olsen in 26 minutes.

Olsen, however, was not aware of the unusual tactics of Chief Thunderbird and his sidekick Swift Eagle, who often joined him in the ring, beating a tom-tom in concert with his Chief’s every move.  Adding chants to distract the opponent, Olsen often turned to attempt a hit on Eagle, whereupon Thunderbird would seize on the opportunity to the delight of the crowd.  Thunderbird, to the amazement of promoter Joe Turner and the crowd, had entered the stage in full Indian Chief regalia, complete with headdress, while Swift Eagle wore little more than his headband and tom-tom.

Olsen demanded a rematch, and Joe Turner, sensing another sellout crowd, happily obliged.  The earlier match had been described in a Washington Post article on November 7, 1937, announcing the rematch to take place several days later.  It no doubt led to an interest in the upcoming match by reading: “Through the match Olsen was annoyed by Swift eagle’s tom tom.  The little Redskin released a barrage of beats every time the Chief was in danger, and this victory cry inspired Thunderbird to greater heights.”[1] 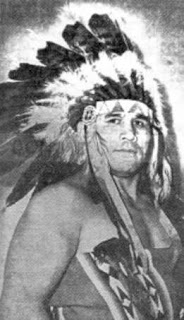 Olsen filed a protest with Turner to prevent Swift eagle from accompanying his rival on or near the ring, but Turner’s showmanship and sense of promotion said that he could not keep Thunderbird’s “second stooge” from doing what he does best.  A full picture and article announcing the event appeared in the November 11, 1937 edition of the Washington Post, seen above.  It stated that “Swift eagle will take up his place in Thunderbird’s corner and hammer away on his antiquated tom-tom.  Whatever it is necessary during the course of the match he will go to town, so to speak, on the tom-tom and release Indian chants tantamount to a war whoop-de-doo.”
Chief Thunderbird (left) was born in 1896 in British Columbia, Canada as Jean Baptiste Paul.  He was the subject of a brief biographical article written by Greg Oliver of Slam!Sports wrestling magazine and website which reads in part:[2]

“From his debut in 1933, until his retirement from wrestling in 1955, Saanich, B.C.’s Chief Thunderbird was the first big name native wrestler from Canada…He was born Jean Baptiste Paul in 1896, the hereditary chief of the Tsartlip Indians at Brentwood on Vancouver Island, son to Tommy Paul and grandson to Ben Paul, both who were noted chiefs with the tribe.

“My people wanted to make a medicine man out of me,” Thunderbird recalled in a 1965 interview with the Victoria Daily Colonist newspaper. “They kept putting me in cold water as part of the ritual. Finally, I ran away from home to attend a mission school at Kuper Island, near Duncan. I wanted to be an athlete more than anything else.” 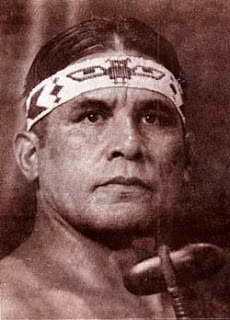 At Indian college in Tacoma, Washington, called the Cushman School, “The Chief” was an active athlete, getting a remarkable eight sports letters in boxing, wrestling, baseball, basketball track and field, football, soccer and lacrosse. The feat made the “Strange As It May Seem” syndicated feature in newspapers.  As a boxer, Thunderbird won 27 of 32 pro fights, breaking both hands at various times. Wrestling would beckon. He often told the tale about being able to beat his adult coach in wrestling while at school.

He took part in an international water competition in 1933 in Coupeville, Washington, winning many events against other native warriors. During the festival, he got his first taste of pro wrestling, with a touring athletic carnival show. According to The Ring magazine from October 1936, “The Chief didn't pin the ‘carnival champion’ but he amassed the large sum of five dollars for the five minutes that he had spent in the ring before being pinned… Virgil Hamlin, a promoter in the Pacific Northwest, was instrumental in encouraging Thunderbird to take up pro wrestling…In 1937 in Walla Walla, Washington, he faced the great Ed “Strangler” Lewis in a outdoor bout at the ballpark. Thunderbird lost.


…Entering the ring in full native regalia, including a feather head-dress and drums pounding, Chief Thunderbird was a noted attraction across North America, but even more so in England, which he toured in 1951-52 and 1954-55. “The Red Indian warrior has made a terrific reputation for himself in this country in the wrestling ring, and due to his broadcasts over the B.B.C. is probably the best known Indian Chief ever to visit Great Britain,” reads a March 1951 program promoting Thunderbird vs Pat O'Reilly. “Everywhere he has appeared there has been ‘house full’ signs displayed long before starting time, and there is no doubt he is a fine wrestler.”

…From his west coast home, he made many trips to Australia, New Zealand and Hawaii, with his first trip to Australia being in 1939. He also toured India in 1955…He retired from wrestling in 1955 when he broke a leg in two places; he had told people that he wanted to wrestle until he was 60 years old…He died November 23, 1966 in St. Joseph's Hospital, in Saanich, British Columbia.” 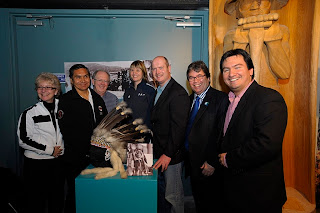 Chief Thunderbird returned to Washington DC in March of 1938 for a match with a Russian named Boris Demitroff.  A newspaper account mentioned he “usually brings along a fellow dark face, swift eagle, who helps the chief on and off with his robe, supplies a rich baritone for the war-whoops Thunderbird emits every now and then, and performs other minor chores.”[3]  Thunderbird returned to Washington again in July and August of 1943 for additional wrestling meets, apparently without his trusted Swift Eagle.  Still revered in Canada, the headdress that became Chief Thunderbird’s trademark was the first artifact to be placed in the Aboriginal Sport Gallery, an exhibit that officially opened on February 17, 2008 at the B.C. Place Stadium on Vancouver Island (above).

Swift Eagle seems to not have had such an impressive sideshow resume as his sometime boss, Chief Thunderbird.  Two years before he moved into 1430 Swann Street, NW, Swift Eagle had been enumerated in the 1930 census with his wife and child close by in a rented house at 1328 Q Street, NW.[4]  That document revels that he had been born about 1897 in California, also the birthplace of both of his parents, and not in New Mexico as he claimed on stage.  He paid $23.50 in monthly rent, and was listed as a “negro,” casting some doubt about his claim of even being a Native American.[5]  His job as a garage mechanic seems to have literally paid the rent rather than his muse as a wrestling sidekick.  His wife Frankie had been born in California about 1908, and they had married about 1926.  Their son James had been born in 1928. 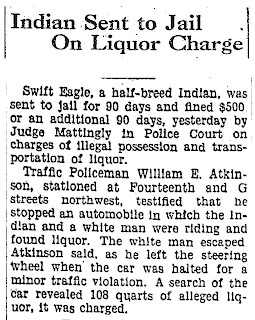 Earlier, in January of 1928, Eagle been sentenced to 90 days in jail and fined $500 or an additional 90 days by Judge Mattingly of the DC Police Court for the illegal possession and transportation of liquor.  He had been caught in a car near 14th and G Streets, NW that had been stopped for a minor traffic violation by Police Officer William E. Atkinson that contained 108 quarts of liquor during the height of prohibition! [6]  The DC Sheppard Act had introduced prohibition of intoxicating liquors in the city effective on November 1, 1917, a full two years before a national prohibition.  Both were repealed in 1933.

While Chief Thunderbird would go on making headlines and travel the world for the next several decades, the last newspaper mention of Swift Eagle appeared in August of 1940, and was aptly titled “Roughing it in New York.”  It reported Eagle heading up a “camp” of twelve country deprived boys atop a New York City apartment building, “with tents, a miniature lake with six carp, and Swift Eagle, an Indian from New Mexico.”[7]  Police had stopped their previous practice of camping on the city streets and roasting potatoes and hot dogs on the street corner.

The 1935 City Directory lists a woman named Rose Wright as a resident of 1430 Swann Street that year, who neglected to provide an occupation, documenting that Swift Eagle no longer resided there.