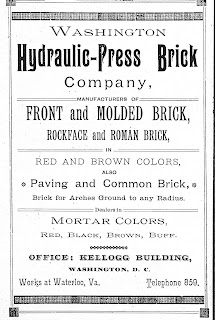 Many people with a brick house might not notice that the bricks utilized on the front facade differ from those found on party walls or even exposed exterior side walls.  The street elevation of most Washington, DC townhouses was often listed on the building permit as being composed of pressed brick, which was a more expensive and aesthetically pleasing finish than the simpler, cheaper common brick.

Common bricks produced in and around the District at the time of construction were generally uniform in shape and color; however, their crude manner of production often resulted in rounded edges that required larger and somewhat irregular mortar joints.  Pressed bricks had sharper edges and could sustain smaller, thinner mortar applications.   Since these pressed bricks required more refined production techniques and a higher degree of skilled labor, their purchase and installation was obviously more expensive.  Thus, they were generally used for the most important elevation of a home.  The 1891 advertisement for the Washington Hydraulic Press Brick Company appears above.
Posted by HouseHistoryMan at 3:24 PM