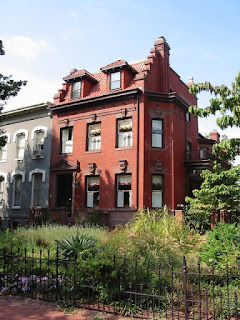 Most homeowners with nineteenth century houses in Washington, DC would believe that their house was the first one built on the lot, but as if often the case, they are mistaken.  Many wood frame houses dotted the landscape in the early to mid 1800s, and were subsequently razed, burned, or moved to other locations as land became more valuable and the population increased dramatically in the city following the Civil War.  The grand house at 712 East Capitol Street, NE is one such example.

Owner and builder Antonio Malnati applied for and was granted building permit No. 222 on August 2, 1902 for the construction of the house that today stands at 712 East Capitol Street.  He had purchased the site in April of that year, and razed a rather substantial wood frame house that had belonged to General John Eaton and had been built before 1873.  Malnati listed himself on the permit as responsible for its construction, and architect George S. Cooper as responsible for its design.  He estimated that the cost of construction was about $10,000, a substantial sum for the time. 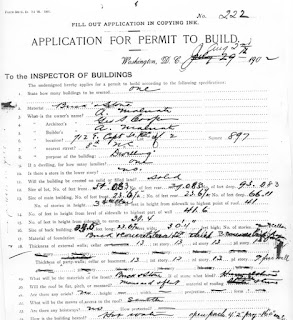 The first house at the address, however, built in the early 1870s, had belonged to John Eaton, originally from New Hampshire, who resided there with his wife until 902, when it was razed to make way for the present house.  The John Eaton School at 34th and Lowell Streets in Cleveland Park is named after this early city resident - it was built in 1910 to the designs of architect Appleton P. Clark and was dedicated on November 23rd of that year.  More on Eaton below.

The Eaton house was razed in the summer of 1902 for the construction of the large brick and stone residence seen today at 712 East Capitol Street.  It can be assumed that construction of the new house was completed by the spring of 1903, when the Malnatis would have moved into their fine home on three lots from 818 East Capitol Street, where they resided earlier.  Unfortunately, Antonio Malnati (whose name incorrectly appears in many publications as spelled Malmati) would only enjoy his grand home for four years; he died of heart failure in 1906.  However, the house was lived in by his wife Lena, and was kept in the family until his daughter Antoinette and her husband sold it in 1960.

Malnati had been born in September of 1845 near Milan, Italy, and immigrated to the US in 1869; Prior to his coming to America, he traveled and worked as a stone cutter through Germany, Switzerland, and France, eventually landing in Baltimore, MD on July 2, 1869.  He worked there until 1872, and worked briefly in Richmond, where he became a naturalized citizen in 1876, before coming to Washington, DC to work as a stone cutter on the State, War, & Navy Building (today’s Old Executive Office Building). 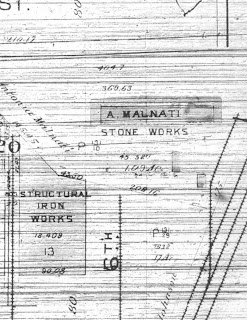 Malnati eventually operated a stone works “along the B & O Railroad line” at the intersection of 6th and V Street, NE, seen here on a 1919 Baist map.  It had been established sometime after 1887 when a map of the area shows that only the American Terra Cotta Tile Company had warehouse space further out along the railroad line, with its own stop.  By 1937, the Malnati works had changed hands and was utilized by William Park as a storage facility.  Today, its site is occupied by the Brentwood postal facility.

His wife Lena was listed in 1910 at the house at age 56, along with her son Charles, a clerk; daughter Jennie, a stenographer; and daughter Virginia, also a clerk.  Tragically, son Victor Malnati had accidently hanged himself in 1895 at the age of 15 in the family shed behind 818 East Capitol Street, where he had created a crude gymnasium.  He was found by his sister Jennie on August 3, 1895 entangled in a rope he had rigged for a trapeze.

Italian born Antonio Malnati first appears in the Washington City Directory in 1882 as a stonecutter living at 660 B Street, NE, the same year formed a partnership with Lane in a firm coined “Lane and Malnati.”  Lane had earlier been listed as a stonecutter himself, residing at 214 Delaware Avenue, NE.  Their city directory advertisement from 1892 appears here.

The Lane and Malnati firm advertised that they specialized in monument, buildings, and cemetery stone, and was located in 1892 adjoining the grounds of the U.S. Capitol, likely working on the ongoing construction of the building at the time.  Malnati's passport application from 1891 appears at right, indicating that he stood 5'8" tall and had a "round" face. 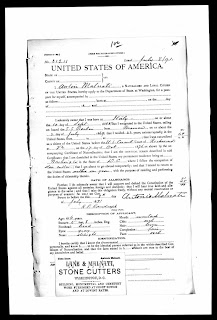 Following his death, the City Directory reveals that Malnati’s son Antonio Charles Malnati moved back into 712 East Capitol Street with his mother and sisters in 1908.  The 1920 census enumerated at the house revealed that it was occupied by Lena Malnati and her daughter Antoinette, who had married Carlton G. Van Emon, a native of Illinois.  He was 35 at the time the census was taken, having been born sometime around 1885.  He indicated that he was employed as a clerk in the Post Office that year.

Lena Malnati died in 1925.  The 1930 census taken at 712 East indicated that it was occupied by only Carlton and Antoinette Van Emon.  He was employed as a certified public accountant in finance, and they estimated that their home was valued at $35,000.  The couple continued to reside at 712 East Capitol until 1943, when they rented it to Mrs. Dee Griffith, a widow of William Griffith.  Beginning in 1948, they rented the house to Harrison F. McConnell, a lawyer.
Antoinette died in 1953, and the house was rented until Carlton sold it in 1960. 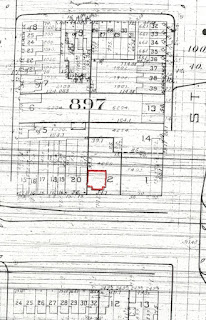 The owner of the previous house on the site, John Eaton, was born on December 5, 1829.  The son of John and Janet (Andrew) Eaton, he received his early education entirely under the tutelage of his parents on their farm at Sutton, N.H.   Eaton arranged to attend the Thetford Academy in Vermont, and from there, worked his way through Dartmouth College, graduating in 1854.

For two years, Eaton was employed as principal of the Ward School in Cleveland, Ohio, and from 1856-1859, he was Superintendent of Schools in Toledo. Despite his love for education and although he was a gifted administrator, Eaton decided instead to pursue a career in the ministry, enrolling at Andover Theological Seminary.  Shortly after his ordination on September 5, 1861, Eaton volunteered to serve as chaplain of the 27th Ohio Infantry, which served in Missouri and Tennessee.

His administrative experience made him a logical choice in November 1862, when Ulysses S. Grant selected him to run the “contraband” camps, caring for and organizing the large numbers of African-American men and women who escaped slavery behind Union lines. Eventually, Eaton's jurisdiction as Superintendent of Freedmen encompassed Mississippi, West Tennessee, Northern Louisiana and Arkansas, a post he held until May 27, 1865. 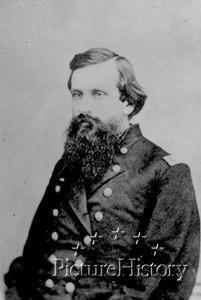 Eaton was rewarded with a colonel's commission in the 63rd U.S. Colored Infantry on October 2, 1863, raised near Vicksburg, and was brevetted Brigadier General in March 1865 (African-Americans were ineligible to become commissioned officers in the Union Forces. White Officers — Lieutenant through General — commanded Union Army Colored Regiments).  In the same month, he accepted a position with the newly organized Bureau of Refugees, Freedmen, and Abandoned Lands as assistant commissioner in charge of Maryland, the District of Columbia, and parts of Virginia.

On September 29, 1864, Eaton married Alice Eugenia Shirley (seen below at the far left of this Shirley family photograph), the daughter of a Vicksburg Unionist. Eaton remained in the South, editing a “radical” Unionist newspaper, the Memphis Post, from 1866-1870, and later won election as State Superintendent of Public Instruction in Tennessee.

Eaton's experience and political savvy are credited with salvaging the floundering Bureau of Education from congressional budget cuts, and he personally oversaw the development of the Bureau's Collection of Statistics. He remained at his post until ill health forced his resignation in 1886.  His influence over the Bureau of Education was impressive: At the time of his appointment, the Bureau had but two clerks and less than 100 books but when he resigned there were 38 assistants and a library including 18,000 volumes and 47,000 pamphlets.
Eaton personally never stopped learning, receiving his Ph.D. from Rutgers University in 1872, and his LL. D. degree from Dartmouth in 1876. 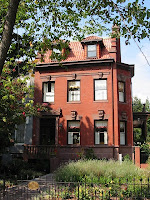 The 1880 census enumerated at 712 East Capitol Street showed that Eaton lived there along with his wife Alice S., then age 35.  They lived at the house along with three children James S., then age 11, Elsie J., age 9, and John Q., age 6.  In addition, the house was home to Alice Eaton’s mother Adeline Shirley, who was then 69 years old, and a border named Sarah Canfield, who was a 45-year-old clerk at the Bureau of Education.  She had been born in 1835 in Connecticut.  The entire family was tended to by a 28-year-old mulatto servant named Virginia Pryor.  She was then age 28, and had been born in Virginia, also the birthplace of both of her parents.


During the military occupation of Puerto Rico in 1899, Eaton was tabbed to organize a public school system there, but was forced to resign a year later due to serious illness.  Eaton’s personal papers have been maintained at the William Clements Library of the University of Michigan.