Historic photographs, such as the c.1890 one at left of the “Logan” apartment building, once located at 27 Logan Circle, can be deceiving to the eye.  What one might assume was a large apartment building constructed at one time was actually a massive expansion of several existing houses that had been built on the site years earlier.  Consider it a 19th Century “pop-up.”

The natural brick building illustrated was an expansion of three houses numbered 27, 28 and 29 Iowa Circle as it was then known, and was adjoined to 26 Iowa Circle, shown in the photograph painted white.  Iowa Circle became officially coined Logan Circle in 1930.  The house at 26 Iowa Circle was built by James G. Hill at a cost of $7,000 following issuance of a building permit on August 8, 1879. Note the crude fountain at the center, documented as little more than a pile of rocks.

However, on October 18, 1883 a man by the name of S. E. Goff applied for and was granted a permit numbered 665 for a new address demarcation of 30 Iowa Circle “to build two brick bay windows – one on circle and one on 13th Street, N.W.  4 Stories High, and raise building two stories, walls to be thickness defined by building regulations.”  With the estimated $6,ooo to complete the job, Goff systematically combined the three young houses, added two stories to their height, and added the bay windows and dramatic turret.  It featured two entrances, one facing the circle, and one on 13th Street.  The new building later incorporated the adjoining house at 26 Iowa Circle in 1910, the same year an elevator was installed.
The c.1906 image above shows the Logan building and adjoining house at 26 Logan then painted
white.  The 1900 census reveals that 65-year-old Lucy Prindle managed the building, and lived there along with her son and sister, and 34 boarders.  They were all Caucasian, and all had been born in the United States; they ranged in age from 21 to 65, and worked such jobs as government clerks, chambermaids, an electrical engineer, a violinist, students, a coffee salesman, and a dishwasher. 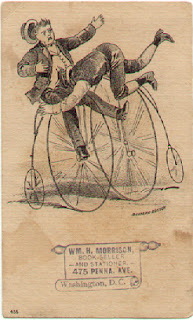 To those early residents of the houses around Logan Circle, a spring delight was a frequent ‘big wheel’ velocipede bicycle race around the circle itself, which was closed to traffic.  The Capitol Bicycle Club twice erected reviewing stands within the circle for their spectators.  One was built in the spring of 1881, and one following issuance of a building permit issued on May 9, 1882, which was constructed at a cost of $189.  It was to be torn down within five days of the event.

The Logan apartment building was coined The Lincoln by 1956, and was listed as vacant in the 1960 City Directory.  It was last listed in 1961, and was destroyed shortly thereafter.  The area was a beloved butterfly garden maintained for many years by area residents until the P.N. Hoffmann firm recently constructed the variegated condominium units that ironically replicate the Logan apartment buildings history and scale.
Posted by HouseHistoryMan at 5:28 PM