A log cabin in Meridian Hill Park? Its True!


Many summer visitors to Rock Creek Park are surprised to find a log cabin along Beach Drive at the overpass of Military Road, and few are likely to know that it was once the home of poet Joaquin Miller (1837-1913).  It was moved there the year of his death from its prior location just east of the cascade in Meridian Hill Park when it was threatened with demolition.

Miller would later be well known in international literary circles, and had built the cabin here in 1893 when he had moved to Washington with political ambitions that ultimately failed.  In fact, much of his background and life experiences that he wrote about were apparently wild fabrications.

Known as the “Poet of the Sierras," Joaquin Miller was perhaps best known for his poem Columbus.  His cabin stood along 16th Street for 30 years until threatened with demolition as the new park was being planned.  He is quoted as saying, "I sit up here in my fine cabin, while the President himself sits down there at the end of the street with his little cabinet."

Miller’s creative writing began with his assumed name; his real name was Cincinnatus Heiner (or Hiner) Miller, who had been born on September 8, 1837, a date that also frequently changed during his lifetime.  The name "Joaquin" was adapted later from the legendary California bandit, Joaquin Murietta. 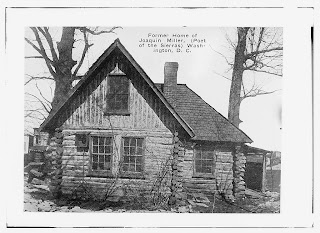 Born to Quakers in Indiana, the family moved to Oregon and settled on a small farm. His often cited exploits included a variety of occupations, from mining-camp cook, lawyer, judge, newspaper owner and writer, Pony Express rider, and horse thief.  As a young man, he moved to northern California during the Gold Rush, and apparently had a variety of adventures, including a year living in a Native American village and being wounded in a battle with Native Americans. A number of his works, Life Among the Modocs, An Elk Hunt, and The Battle of Castle Crags, draw on these alleged experiences.


About 1857, Miller supposedly married an Indian woman named Paquita and lived in the McCloud River area of northern California; the couple had two children.  Miller then married Theresa Dyer (alias Minnie Myrtle) in 1862, and had three children with her. The couple divorced in 1869.  Miller married for the third time in 1879 to Abigail Leland in New York City.

He was jailed briefly in New York for stealing a horse, and various accounts give other incidents of his repeating this crime in California and Oregon.  Despite that fact, Miller found his way to Canyon City, Oregon by 1864 where he was elected the third Judge of Grant County; his log cabin built there is still standing as well. 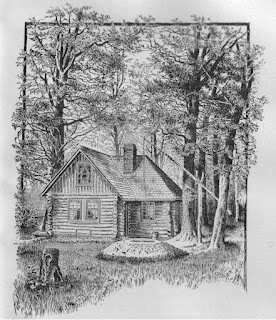 After losing his bid for a seat on the Oregon Supreme Court, he left the Pacific Northwest and spent some years traveling, living in and visiting England, New York, San Francisco, Brazil, and Washington, DC, where he built his cabin on Meridian Hill in 1883.  Disappointed at not being appointed as Ambassador to Japan, about ten years later Miller settled in the Oakland Hills of California.  He gave his Washington cabin to a friend, who soon gave it to the Sierra Club.  In 1912, one year before Miller's death, the National Park Service became its reluctant new owner.

The California State Association had sought to move it to Rock Creek Park, but the NPS had refused the request.  It was only after Senator John D. Works of California intervened successfully that the cabin was disassembled, moved, and rebuilt at its current location.

From 1893 to his death 1913, Miller resided on a hill in Oakland, California, in a home he called "The Hights." [sic]   He planted hundreds of trees and even built his own funeral pyre on the property.   The Hights was purchased by the city of Oakland in 1919 and eventually became the Joaquin Miller Park, a designated California Historical Landmark.

Fellow author Ambrose Bierce, however, once called Miller "the greatest-hearted man I ever knew" but is also is quoted as saying that he was "the greatest liar this country ever produced. He cannot, or will not, tell the truth."

Miller's poem Columbus was once one of the most widely known American poems, memorized and recited by most school children of the era.  It reads:

Behind him lay the gray Azores,
Behind the Gates of Hercules;
Before him not the ghost of shores,
Before him only shoreless seas.
The good mate said: “Now must we pray,
For lo! the very stars are gone.
Brave Admiral, speak, what shall I say?”
“Why, say, ‘Sail on! sail on! and on!’”

His other poems include Songs of the Sierras, Songs of the Sun-Lands, and The Ship in the Desert.  In his later years, six volumes of his collected poems and other writings were published in 1909.  He died in Oakland on February 17, 1913.


After Miller's death, his family maintained ties to the cabin.  In 1931, Public Buildings and Public Parks leased it to Pherne Miller, his niece, who conducted art classes and sold candy and soft drinks there until the mid 1950's.

Many know the cabin in Rock Creek Park today as the site of the Miller CabinPoetry Series, one of the oldest summer reading series in Washington.  It was begun in 1976 by poet and physicist Jim Beall, when the NPS gave permission for poets to gather for informal poetry workshops outside the cabin by candlelight, part of the Word Works Program.

The readings continue to this day, every Tuesday in June and July (at 7:30 p.m.), with both well-established authors and first-time readers, and local and foreign poets from around the globe.

Posted by HouseHistoryMan at 3:09 PM

While The Word Works appreciates the mention about our Joaquin Miller Poetry Series, in 2011 we moved the program to the Rock Creek Nature Center and we will continue there this summer.

Dr. James Howard Beall got the first permission to use the cabin in 1976 but the poetry programs originated with the work of Karren Alenier. Dr. Beall, Robert Sargent, Karren Alenier held small poetry workshops inside the cabin and then readings for many summers until the program attracted so many people, we continued outside the cabin. We have published our history in Whose Woods These Are and in Cabin Fever, two anthologies that contain time lines, anecdotal text and of course poetry by people who read there.