Changes Over Time to Dupont Circle Park and Fountain 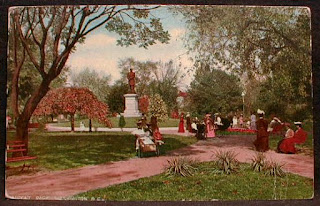 Most Washington residents correctly assume that Dupont Circle is named after the famous chemical and industrial du Pont family, but few may few know that its central white marble fountain was not the first statuary object to commemorate a member of that prestigious family, Admiral Samuel Francis du Pont.

Before 1882, Dupont Circle was referred to as Pacific Circle, a name designation instituted by city planner Charles L’Enfant.  On February 25th of that year, the U.S. Congress officially designated it as Dupont Circle, and within the following two decades, large and lavish homes began to appear around its perimeter, having been developed far later than Logan Circle.  Dupont Circle itself was landscaped with lush plantings, 850 ornamental trees, and exotic flowering species, and in 1884, a bronze statue of Admiral Samuel F. Dupont was placed atop a granite base at its center.  It was sculpted by artist Launt Thompson. 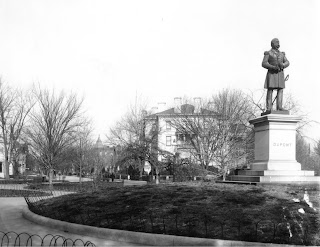 Samuel du Pont was born in 1803, and had become involved in military affairs at the young age of 12, when he was appointed to the U.S. Navy by President Madison.  Following an impressive military career that took place all over the world, he was appointed Rear Admiral on July 16, 1862.  Toward the close of the year several armored vessels were added to his command, mostly of the monitor type.  Being the first officer to whom the monitors had been assigned, he carefully tested their offensive powers, hampered by their small number of their guns and the slowness of their fire.  On April 7, 1863, du Pont led a charge to take Charleston, South Carolina.

His gallant effort had failed miserably, however, with limited maneuverability in the channels, one ship sinking and five others being disabled.  Du Pont had beforehand given an opinion that a ground force was necessary, but had been rebuffed by the Navy.  His last military action seemed to tarnish his lifelong career, and Charleston only fell on the approach of Sherman's army.  Du Pont died in Philadelphia, Pennsylvania, on June 23, 1865. 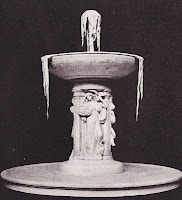 Following its relocation, the du Pont family commissioned Daniel Chester French to design the fountain that now stands where the statue of Samuel once stood.  Known for his masterpiece of Lincoln in the Lincoln Memorial, French was hired to carry out the designs of architect Henry Bacon.  Incidentally, French’s daughter then resided close by in the 2000 block of R Street.  A picture taken in 1918 of the model seen here indicates that it originally had a top fountain at the highest point that was never incorporated into the built fountain.

Interestingly, water pipes had been laid for a potential fountain in 1877, but had never been utilized.  The installation of the fountain itself in 1922 also met the direction of Pierre L’Enfant’s notion in 1791 that “the center of each square will admit of Statues, Columns, Obelisks, or any other ornament such as the different States shall may choose to erect: to perpetuate not only the memory of such individuals whose counsels or Military achievements were conspicuous in giving liberty and Independence to this country.” 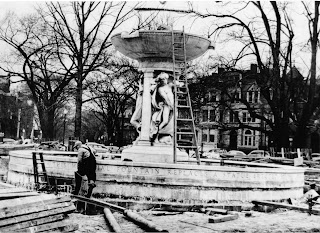 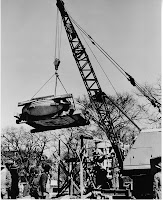 The only time the Dupont Circle fountain has been disturbed since was in 1948, when plans commenced to temporarily remove it for the construction of the Connecticut Avenue trolley underpass.  It was replaced shortly before its opening in November of 1949, and has remained as a gathering spot for Dupont Circle residents ever since.