The large house at 1252 Maryland Avenue was built in 1892-1893, but is perhaps best known as the location of the Washington Junior College of Music and Education beginning in 1947; and the granddaughter of its founder, Andrea Kelly, still resides there to this day.  She commissioned us to do a house history in 2002 and provided the historical photographs seen on this page: we promised to bring a bit more documented history of the school and its various locations in and around Washington, DC.  We love a good mystery! 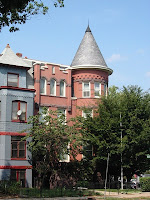 John H. Buscher received a permit on September 28, 1892 for the construction of 19 homes including the largest of the lot, 1252 Maryland Avenue, NE.  The homes were designed by architect Appleton Prentiss Clark Jr. (1865-1955) and built by Henry Getz, who lived close by at 634 10th Street, NE.  Owner/developer John Buscher lived at 928 Maryland Avenue, NE, but would move into 1252 Maryland Avenue with his family when the houses were completed in the spring of 1893.

Just two years later, the Washington Pittsburgh Courier carried a story about the pioneering young couple and their Washington Junior College of Music and Education.  It explains the origins of the academy and the previous locations of the institution.  The article also refers to the fact that James Eubanks was a graduate of Frelinghuysen University of this city, an education institution started by Jesse Lawson and well known African American educator Anna Julia Cooper in 1907.  From 1921 to 1926 they maintained a house at 1800 Vermont Avenue as classrooms (that I had purchased myself in 1992), and later met at Cooper’s own house at 201 T Street when racial pressures and legal discrimination of the era prevented it from owning property in the city or elsewhere.

The Washington Junior College of Music and Education operated for many years out of 1252 Maryland Avenue.  The 1949 newspaper account indicated that at the time, they maintained an impressive 12 pianos and 1 organ at the property, on which 200 students were taught from kindergarten age to college graduates.

The school had its origins at 656 12th Street, NE., in 1930, when pioneering pianist James Eubanks expanded a teaching studio into a full-fledged school.  He had decided in 1928 to forego law and culture studies, having been a graduate of Frelinghuysen University, Temple University School of Music, and the Von Unschuld University of Music in Washington.  Students at the 656 12th Street, SE location are pictured at right. 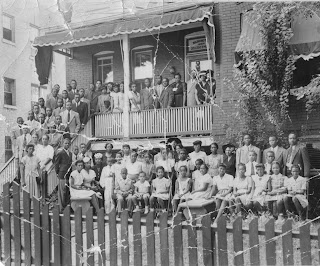 Recital brochures from the late 1940s began to include images of the new location for the Washington Junior College of Music and School of Education at 1252 Maryland Avenue, pictured below, the exterior, and in the library.  Courses had been added to the curriculum until a four year course of study was offered that involved classes in piano, violin, wind instruments, theory, harmony, voice, music history, reviewing, ear training, sight singing, choral rehearsal, and music appreciation. 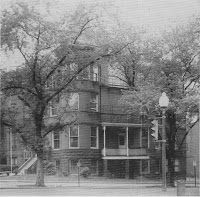 James Eubank’s wife Gustavia held the position of Vice President and Treasurer throughout the school’s history.  Following World War Two, the school had established itself with such credibility that it was eligible for Veteran’s educational benefits from the government.

A view of 1252 Maryland Avenue from the 13th Street side (left) was featured in a recital program from June of 1949.

Despite their age or classroom, all students had to adhere to rules posted by James Eubanks himself throughout the school.  He stated that students disobeying the following nine rules would be “dropped immediately”: 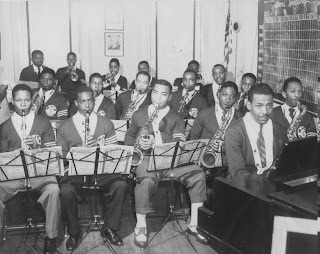 James and Gustavia Eubanks’s granddaughter, interior designer Andrea Kelly, and her husband Archie continue to live and reside at 1252 Maryland Avenue to this day, continuing a long legacy of a proud and distinguished family ownership.