The History of Bradbury Pianos and 1757 Q Street

The well respected “Bradbury piano” is familiar to generations of pianists and musicians beginning with its unveiling in 1861 in New York.  The influence of the company and its profitability spread rapidly, and a showroom for the many varieties and models of Bradbury’s opened in Washington in 1877.  Located at 1225 Pennsylvania Avenue and owned by Freeborn G. Smith, the building featured a plethora of advertising signs, and was managed for decades by a Dupont Circle resident in the 1700 block of Q Street by the (great) name of William Van Wickle.

The Bradbury piano was the brainchild of noted hymn singer and church music composer William Batchelder Bradbury, who strived to combine the traditional tone of the organ with the mechanics of a standard piano.  His vision became a reality with the production of the “Bradbury” piano in 1854.

And, like any good businessman of today, Bradbury cashed in and sold the business shortly thereafter, in 1867, to investor Freeborn Garrettson Smith, but died just a year later.  Smith’s Washington’s showroom opened just ten years later, in 1877. By 1903, Bradbury pianos were being mass produced with impressive quality, and sold in showrooms that Smith owned in eighteen cities nationwide.

The long time manager of Washington’s F.G. Smith Piano Company was Dupont Circle resident William Perrine Van Wickle, who resided at 1757 Q Street, NW.  Pictured above, it was later replaced by a modern townhouse, but had looked like its neighbor at 1759 Q Street, a brown stone house also seen above).

Van Wickle was born in November of 1856 in Lyons, New York, and received his education at Palmyra (NY) Classical School, and at the Troy New York Academy.  He went to New York City in 1876 and worked for the Bradbury Piano Factory as a shipping clerk and later in the repairs department and general offices. In 1878, he opened a branch piano warehouse in Brooklyn and another in Jersey City, in August 1879.


He moved to Washington in 1879 to take charge of Bradbury Warerooms, which Freeborn G. Smith had purchased that year from Harry Sanders and Dr. J. A. Stayman, intending to stay for only a short time.   It was then located at 1103 Pennsylvania Avenue, but in 1887 moved into larger quarters that Smith had constructed in 1887 at 1225 Pennsylvania Avenue, seen here.  The site had earlier been home to Barlow’s art gallery. 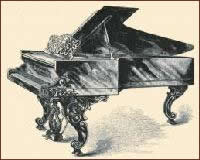 The 1903 Book of Washington states that “the successful sale of the well respected Bradbury pianos in Washington was largely due to William's personal acquaintance with public men and high officials from the chief executive on down.”  The five story showroom allowed space for 75 Bradbury piano models to be seen, and older pianos to be stored that had been taken in exchange for new Bradbury’s.

Van Wickle eventually established the Van Wickle Piano Company, also handling the Bradbury line of pianos.  In 1888, he married Albenia Gibson King, who was well connected to an old and established Washington family.  She had been born in Washington in September, 1867.

William was director and treasurer of the Washington Board of Trade, a member of the Columbia Historical Society and the National Geographic Society. He was a leader in the Free and Accepted Masons, member of Lafayette Lodge #19, Royal Arch Masons, Washington Commandery, and the Knights Templar.  He was secretary of the reception committee that welcomed Admiral Dewey to Washington and was appointed secretary of National Capital Centennial Commission, which commemorated the one hundredth anniversary of the establishment of the seat of Government in the District of Columbia on December 12, 1900. 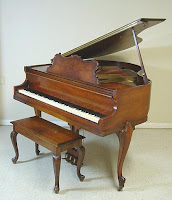 Van Wickle was also chairman of a committee charged with over 200 points of historical interest in Washington during the 36th National Encampment of the Grand Army of the Republic in 1902, nearly 100 years before the city witnessed the creation of a heritage trail.  Van Wickle died on October 25, 1926.

Bradbury pianos continue to be manufactured today, under several subsequent changes in business names.  Today's Bradbury models follow the trend towards less expensive, smaller, more compact, instruments and are made in a variety of designs.
Posted by HouseHistoryMan at 12:34 PM

I enjoyed your biography. I did the same thing a while back. if you would like to take a look I had found some nice photos of Bradury.
Bradbury Piano Co.

I also enjoyed your biography especially since my great great grandfather was William Bradbury. My grandfather, Harry Brower, could play every instrument there is, including, of course, the piano.