In some social circles, although nobody will admit it, the “oldest house” always wins.  Homeowners like to boast about how their home is older than the neighbors, but some go to the extreme of mounting a plaque on the property with a construction date, which we find to almost always be incorrect.  One such house in Georgetown at 3042 Q Street had a plaque stating the house was built in 1840, placed by a prior owner of our client: they wanted to know if it was accurate.

The build date was indeed incorrect, and how!  It was off by almost 100 years, in fact.  It also boasted that the house was owned by an “R Bolling, a nephew of President Wilson.  That was also apparently just made up.

Imagine my trepidation when I presented the final house history – and proved that the house had been built in 1937, not 1840.  That is right: the land on which it sits was vacant until a building permit was issued in July of 1936 to build the present house, albeit with resourced antique brick, moldings, fireplaces, and the like that has since fooled every prior homeowner (including our client).
3042 Q Street was built on property which had previously belonged to the Calvary Methodist Episcopal Church at 3038 Q Street.  By 1936, all of the south side of Q Street between 30th and 31st streets had been developed, except for the westernmost twenty-foot strip of Lot 280 (which became Lot 819), west of, and adjacent to the Church and its parsonage at 3040 Q Street. 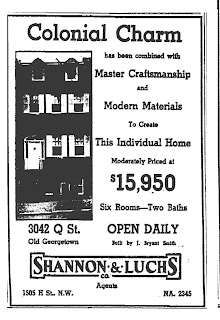 In July of 1936, Alfred E. Lewis, Jr., a salesman for Shannon & Luchs Real Estate, bought this narrow parcel by assuming a debt owed by the church.  He secured a permit to build a dwelling in the space between what is 3040 and 3060 Q Street.  Although Shannon & Luchs did have a home building division at the time, it appears that the project was independent of his business.  It was constructed on Square 1269, land which was part of Beall’s 1783 addition to the city of Georgetown.

Although in the midst of the Great Depression, Washington metropolitan area home starts in the fall of 1936 had jumped 50 percent over the previous year.  Because Lewis had to erect the house between two neighbors, he made agreements with them in September of 1936 to use their side walls to structurally support his own building.  The floor joists were presumably seated in these existing walls.  The house was actually built by contractor J. Bryant Smith based on a design by Robert T. Hafer.

Lewis’s permit allowed for the construction of a two story brick dwelling at 3042 Q Street, with seven rooms, and estimated cost of the new structure at $8,000.  As was the custom during the preservation craze in the 1930s, mostly thanks to Colonial Williamsburg, he apparently utilized salvaged building materials, including fireplace mantels and a multitude of arched doorway openings.

Construction of the house at 3042 Q required approximately 20,000 bricks and 800 concrete blocks.  Notes taken by the Building Inspector during the construction phase reveal that the house was not started until September 9, 1936.  These notes are an important part of the historical record, as in this case, they reveal that the house was not completed until the following year, 1937.  The notes left in the left margin of the small tablet reveal the date and percentage of construction complete as follows:

Builder J. Bryant Smith began his home-based contracting business in 1927, after several years experience as a carpenter.  He remained in business in the District throughout the Depression, until 1942.  He indicated on the building permit in 1936 that his address was 522 14th Street, SE.  Robert T. Hafer seems to have been a minor architect; the building permit lists his role as “designer.”  Apparently working from his home, Hafer was only in the District about two years, first being listed in the 1934 City Directory as a “foreman.”  Undoubtedly, he was a man with practical construction experience who discovered he had a flair for architectural design.  It is not unlikely that he had worked for Smith on other projects around the city.

Given its origins, 3042 Q Street is a fairly sophisticated and well-done example of Georgian Revival architecture.  By the 1930s, early American architecture represented at Williamsburg, Virginia and in the American wings of many fine arts museums had given the Georgian Revival new life.  Academic examples of “colonial” and federal-period structures began to appear all over the country, but particularly in the eighteenth-century cities of the east coast.

According to the report of the Georgetown Historic District Project by Robinson & Associates, Inc., “increasingly, newly constructed housing in Georgetown began to mimic the aesthetics of the old.  Many of the buildings from the mid-1930s to the present are “modern” versions of historical styles and many, in fact,
are too close for comfort in their replication.  It often takes a close inspection to discern which Georgetown buildings date to the early 19th century, versus those that date to late 20th century.”  Certainly, 3042 Q Street would be counted among these.

The former Calvary Methodist Episcopal Church South stands today at 3038 Q Street, was built from 1906 to 1907.  It was designed by architect W.S. Plager.  The congregation had first been organized in 1896.  From 1939, it was known as the Aldersgate Methodist Church, to distinguish it from the Calvary M.E. Church on Columbia Road, NW.

Just before World War I, the trustees of the Aldersgate church purchased the house next door at 3040 Q Street with the intention of using it as a residence for their pastor.  Designed by Charles Harkness in 1891, this dwelling housed at least ten successive pastors until 1954, when it was again sold to a private individual.  The church itself was sold at about this time, to the Bible Presbyterian Church congregation.  In 1960 it was purchased by the Church of Two Worlds, a congregation of spiritualists affiliated with the National Spiritualist Association of Churches.

Owner Alfred E. Lewis did not build 3042 Q Street as a personal residence, but rather as a real estate investment, as rented the house for four years until he sold it in 1941.  It was advertised for sale in the January 31, 1937 Washington Post, however, seen above, shortly before it was completed.

The renter from 1937 to 1941 an individual named L. Metcalfe Walling and his wife Francis.  He was listed as the “Administrator of Public Accounts” for the U.S. Labor Department.  They remained in the house until Lewis sold it in 1941, when they moved to 2429 Chain Bridge Road.

The City Directory lists the house as vacant in the year 1942, but lists Elbert F. and Olive R.C. Baldwin as residents a year later, in 1943.  In fact, they had purchased the house from Lewis in September of 1941.  Elbert Baldwin was born 1896 in New York City, as a son of the foreign editor of Outlook magazine.  He was educated at private academies in Massachusetts and apparently graduated at a very young age from Williams College in 1907.

He went to France as an ambulance driver with the American Field Service at the outbreak of World War I, and then joined the U.S. Navy when America entered the war.  He served as an ensign aboard a submarine chaser in the Atlantic.  Following the war, Baldwin served as a commercial attaché in Warsaw, Vienna, and Prague.

He returned to the U.S. in 1928 and served with the Department of Commerce in Washington.  From 1929 to 1932, he was foreign editor of Business Week.  He then began his own business magazine, Research International, in Paris.  When the Germans invaded France, they were forced to return to the U.S, and it was at that time they purchased 3042 Q Street.

While residing in Washington, Elbert worked on the lend-lease program with America’s allies before joining the Office of Strategic Services (OSS) in 1944, the forerunner of the Central Intelligence Agency.  Within the OSS, he attained the rank of major, serving in Italy until after the Germans surrendered.  He died in Washington in 1947.[1]

His wife, the former Olive Conrad, was born 1896 in Washington County, Maryland.  She received training as a nurse in the city hospital at Martinsburg, West Virginia, and served in that capacity during World War I.  Her first husband, Dr. Lawrence Chisholm, died in 1921.  Olive married Elbert Baldwin in the early 1930s and accompanied her husband to France shortly thereafter.

Olive also did nursing work in China and the Philippines with an Episcopal Church mission program.  During World War II she served as nursing director at Arlington Hospital, and continued to work at Georgetown University Hospital and as a private duty nurse until her retirement in 1970.  She died at a nursing home in Boonsboro, Maryland in the spring of 1983, after moving from 3042 Q Street just a year previously.

Thomas and Birgit Jacoby Zell, German nationals, purchased the home from the Baldwin estate for $275,000 in July 1983.  They resided there for about three years, before moving to Falls Church, Virginia.  They then rented the property to Guenter Keils, likely a countryman of theirs, for the next five years.  At the end of February 1991, Zell sold the home to syndicated columnist and author Jules Witcover.  He would become the fourth owner of the home.  He married Marion Elizabeth Rodgers in the rear garden on June 21, 1997.

[1] At that time, in addition to his wife, he was survived by a son, John Elbert Baldwin of New York, a brother, Theadore W. Baldwin of Napa, California, and three sisters: Mrs. J.J. Steiner of Birmingham, Alabama, Mrs. Theodore C. Hume of Newton, Massachusetts, and Dr. Janet S. Baldwin of New York.

Posted by HouseHistoryMan at 12:29 PM

I am very amazed by the information of this blog and i am glad i had a look over the blog. thank you so much for sharing such great information.
new york fha
violation removal