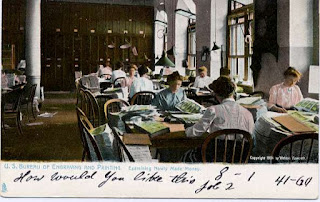 “People who are unacquainted with department life in Washington are very apt to believe that government clerks, as a general thing, are indolent and improvident – a peculiar set who have obtained office by political favor, who work very little, and spend the liberal salaries they receive in extravagant living.  This is a singular but by no means uncommon mistake…it can be truly said that the majority are industrious, sober, economical, and, without doubt, fully on par with similar workers in commercial lines.”

In 1889, male clerks usually began with a salary between $800 and $1,000, while their female counterparts began at $700 per year.  Interestingly, each also received 30 days per year of paid vacation!

Posted by HouseHistoryMan at 9:30 AM