History of the VP House, Naval Observatory and the Master Clock

While most of the focus of the 2012 Presidential inaugural will be aimed towards the White House, another white house in Washington also has its fair share of history; the official residence for the Vice President of the United States.  Countless commuters travel by its location on Observatory Circle, noted by the curving of Massachusetts Avenue as it approaches Wisconsin Avenue, NW, without the fanfair awarded to 1600 Pennsylvania Avenue.  The white brick Vice Presidential house was completed in 1893.

The current VP residence stands on what was a working form in the country when it was purchased by Cornelius and Margaret Barber from Brooke Mackall in 1834.  The modest brick house and barn were named North View, a foreshadowing of the eventual owner and use of the property by the US Naval Observatory.  About 1851, the Barber’s replaced their farmhouse with a grand Italianate villa, just before the death of Cornelius in 1853.  At the time, the estate included 73 acres, 15 enslaved persons, and 20 men in residence working the fields.

Barber received compensation for her slaves in 1862, unlike her the majority of her neighbors, when President Lincoln signed an act for paid emancipation for District residents a full nine months before the Emancipation Proclamation was signed into law nationwide.  Margaret Barber sold the farm to the federal government in 1881, and later died of influenza, in 1892.

The lands sat vacant for some time, as plans were debated and additional lands acquired for the relocation of the US Naval Observatory from its prior location at 23rd and E Streets, NW.   Founded in 1830 as the Depot of Charts and Instruments, the Naval Observatory is one of the oldest scientific agencies in the country.  As a service organization, one of its first tasks was the calibration of ship's chronometers, which was accomplished by timing the transit of stars across the meridian.  Scientists dropped balls at predetermined times from a pole on the roof, visible to ship captains stationed in the port.

Construction on most of the buildings of the new Observatory began in 1888, designed by noted architect Richard Morris Hunt.  In 1893, the U. S. Naval Observatory moved to its present home there, and for the first time the Observatory had ample grounds to set up instruments far from the reach of city lights, smog, and vibrations from roadways.

Several houses and duplexes were built on the grounds for personnel, along with a large house for its Superintendant, Frederick V. McNair, who served from 1890 to 1894.  It was designed by Leon Emil Dessez (1858-1918).


The brick house was built at a cost of about $20,000.  In 1928, it became the official home for the Chief of Naval Operations (CNO).  It remained a natural brick color until it was painted white in 1961.  In 1974, the house was designated the official residence of the Vice President of the United States, who up until that point, was responsible for renting or buying their own residence in the Capitol (Gerald R. and Betty Ford were its first inhabitants). 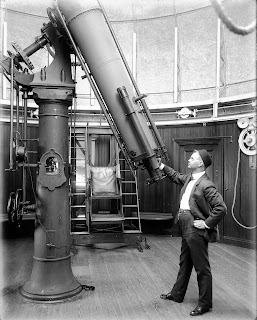 Architect Dessez was born in 1858 in Washington, DC, the son of French born Jean Baptiste Leon Dessez and German born mother named Minna.  Young Dessez began an apprenticeship in architecture in the office of Hornblower & Poindexter in 1877, at the age of 19.  He worked as an architectural assistant on the Washington monument completion and on various jobs at the Navy Yard.  He opened his own firm in 1886 and the following year, Dessez was one of several architects to found the Washington chapter of the American Institute of Architects (AIA).

He married Dessie Semmes and they resided for most of their lives at 3815 Jennifer Street, NW; her married name of Dessie Dessez no doubt confused or amused many a stranger.  Dessez served as the director and chief architect for the Chevy Chase Land Company when it was established in 1893 and would continue to serve in that capacity until his death on December 25, 1918. 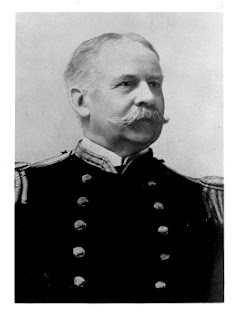 Frederick Valette McNair (1839-1900) was Superintendent of the Observatory from June 28, 1890 to November 21, 1894.  He had been born on January 13, 1839 Abington, Pennsylvania, and was appointed a midshipman in 1853.  He served on the Atlantic blockade stations and Mississippi River patrols during the Civil War, and eventually obtained the rank of rear Admiral.  His great-grandson, Frederick V. McNair IV, is a former professional tennis player who reached the World No. 1 doubles ranking in 1976.

The U.S. Naval Observatory today performs an essential scientific role for the United States, the Navy, and the Department of Defense.  Its mission includes determining the positions and motions of the Earth, Sun, Moon, planets, stars and other celestial objects, providing astronomical data; determining precise time; measuring the Earth's rotation; and maintaining the Master Clock for the United States. 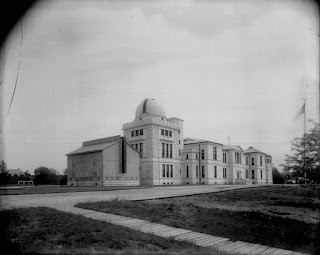 This astronomical and timing data, essential for accurate navigation and the support of communications on Earth and in Space, is vital to the Navy and Department of Defense, and makes everyday GPS technology possible.

Tours of the U.S. Naval Observatory and a demonstration of the Master Clock are available on alternating Monday nights, by reservation only, although they may be cancelled at any time with little notice.  Visitors can expect tight security and tours are often booked months in advance, but an online request can be made HERE.

Posted by HouseHistoryMan at 2:14 PM

Fantastic post--I live a few blocks away from this! By the way, I believe it's spelled "naval," not "navel." :)