The Kenesaw Apartment Building at 16th and Irving NW 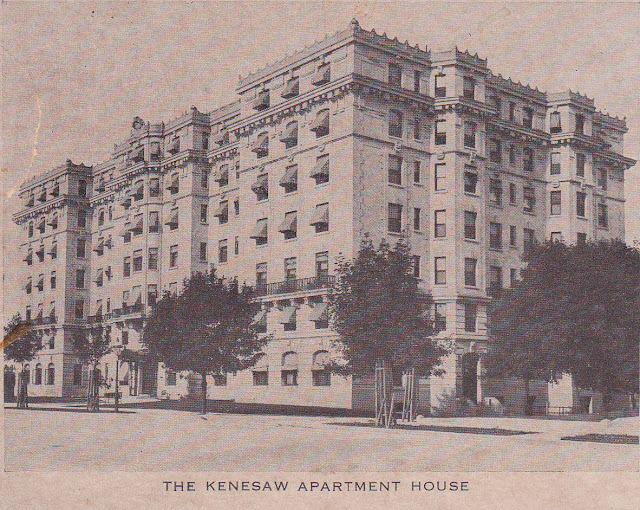 The Kenesaw Apartment building was built beginning in April of 1905 on a prominent triangular site atop a significant elevation at the corner of 16th Street and Irving Streets that allowed tremendous views of the city for its early inhabitants.  It took its name from Kenesaw Avenue – now Irving Street – and it was fairly unusual in that it was built by a team of investors that intended to own and reside in the apartments for decades to come.  It was also the second apartment building in Washington, following the Ontario, to be designed with all four sides acting as primary facades, each being constructed of Indiana Limestone.

The apartment was designed in 1903 by the Averill & Stone, owned by engineer Frank L. Averill and architect George Winchester Stone, Sr., three years before construction began.  It was delayed due to Congressional desire to have the prominent site taken by eminent domain to serve as a public park, in part to encourage the development of 16th Street.  The seven original investors of the Kenesaw Apartment House Company, including former Senator John B. Henderson, lobbied Congressional members to allow construction, and in April of 1905, District Supreme Court Chief Justice Clabaugh ordered that a writ of mandamus be issued that led to the building permit that same month.

The Kenesaw was built with retail space on the ground floor for both tenants and future neighbors – the area was sparsely populated at the time – as well as the manager’s office with safe for valuables, gracious lobby, two public parlors, two dining rooms, and a large café.  The building was built with 65 apartments; 12 efficiencies, 8 one bedrooms, 31 two bedrooms, and 14 three bedroom apartments.


Engineer Averill and architect Stone were paid for their services with stock in the Kenesaw Apartment House Company stock.  Stone was an 1889 graduate of the Massachusetts Institute of Technology, and had moved to Washington, DC in 1901 to work in the Supervising Architect of the Department of the Treasury.  He remained on the Board of the Kenesaw until his retirement in 1957.

The Kenesaw was home to several members of Congress and Hall of Fame pitcher Walter “Big Train” or “Barney” Johnson (1887-1946) of the Washington Senators.  In 1913, the owner investors bequeathed the triangular park on the southern point to the city to be used as a public park.  In 1924, an equestrian statue of the first Methodist bishop in the United States was placed, honoring Francis Asbury (1745-1816).

Like many of the former luxurious apartments buildings in urban centers, after 50 years of existence the physical condition began to deteriorate and the profit margins began to decrease.  Faced with large maintenance and upgrading hurdles, the Kenesaw owners sold the building to Dr. Aaron H. Gerber in 1964, but it continued to deteriorate.  Gerber transferred ownership to the Antioch College of Yellow Springs, Ohio in 1974 in exchange for tax breaks.  The college had intended to use the building for its Law School, having operated several schools in former houses further south on 16th Street.

However, because of the large number of housing code violations, the school instead decided to put the building on the market in 1977.  The following year, the remaining 78 tenants attempted a failed effort to purchase the building themselves, which at that time had no functioning heating or elevators.  It became a symbol of the fight to save housing for the poor. 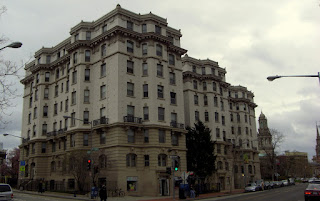 After court battles, sit-ins, demonstrations, and students of Antioch itself siding with the tenants, the Kenesaw was sold to the DC government in 1978 for $800,000.

The city began extensive renovations, in 1979, but had hired a contractor that failed to perform the necessary repairs at a cost of $2 million.  A second contractor was hired, and in the end, the added costs meant that most of the current residents could no longer afford their units when they were completed.  In 1984, it was sold to private developers, including some of the tenants that had endured years living in a partly unfinished building.  It was renamed the La Renaissance.

Posted by HouseHistoryMan at 2:33 PM

Thanks for such a wonderful blog. I appreciate your efforts to write this. Keep Posting!! house for sale in bangalore|villas in bangalore - Real Estate

Thank you for for taking time to research my family home. My family moved to the Kenesaw in 1978 and I can vividly remember the protests, sit ins, and having to endure the living conditons to ensure that our family had a home. I just recall these events as a child, but having your blog,places things in better perspective. Thanks again.