Washington, D.C. residents are fortunate to have original building permits for most of the structures in this city built after 1877, when they were first required, but sadly, the vast majority of the accompanying drawings to these records were destroyed by the city government in the 1960s. 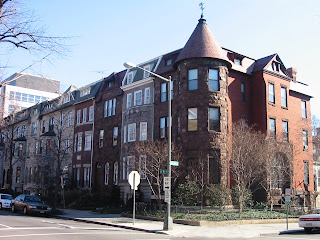 It is always a rare occasion to obtain a detailed artist orarchitects rendering of a planned residential development, such as that above of the row of houses located on R Street between 20th and 21st Street, NW.  They were built following a building permit that was issued on June 17, 1886, and remain to this day.

The permit listed owner Brainard H. Warner as owner of the lots and builder of the eleven houses that were to be constructed between 2006 and 2028 R Street at a cost of $77,000 or approximately $7,000 each; a substantial sum for the time.  He listed architect W. F. Weber from Baltimore as responsible for the design of the houses, which were to be constructed of brick, marble, and brownstone atop a concrete foundation.

Warner listed his address as 2100 Massachusetts at the time of his application to build the houses.  It was a house that he had built himself just two years earlier, in 1884.  He would remain at that address throughout his building and finance career in the city, overseeing the construction of more than one thousand houses under the guise of the B. H. Warner & Co business.

Warner had been born in Great Bend (now Halstead) Pennsylvania, in 1847, and had served in the Army until accepting an appointment at the U.S. Treasury in 1866.  Upon his 1872 graduation from The George Washington University Law School, Warner joined the real estate firm of Joshua Whitney & Co.  He later succeeded the owner following his death, and constructed the Warner building in 1876, signaling the beginning of a rather substantial yet undocumented construction career.

Warner was eventually involved in a large variety of business related enterprises, including the founding of the Columbian National Bank in 1887, President of the Washington Board of Trade, and member of the Committee of 100.  John Proctor wrote in Washington Past and Present that “many of our finest statues, buildings and parks stand as monuments of his unceasing energy and devotion to the national capitol.”


Warner himself published the Real Estate Review in Washington for an unknown number of years.  The illustration of the homes along R Street seen here were included on the cover of Volume IX, Number 8, dated October 1887.  The caption under the detailed drawing of the elegant houses stated, “Block of stone front buildings, just being completed, on the corner of 21st and R Street, N.W.”

The eight page paper, purchased on an on-line auction site, featured condensed real estate stories from around the country, a variety of advertisements from local contractors and suppliers, and a enormous classified listing section with hundreds of lots for sale, houses for rent, and houses for sale in all quadrants of the city, apparently all owned by the B.H. Warner company itself.  We’ve also listed it for sale again in our eBay Store HERE.

Warner retained and rented at least some of the houses in his 2000 block of R Street development.  The 1900 census revels that the house at 2011 was rented to Marcellus Bailey and his wife, daughter, and niece who were tended to by three servants.  Private secretary Charles Moore rented the house at 2013 R that year, with the house at 2015 R Street owned by John Head.  Russian born William Ferson rented the house at 2010 R Street in 1900, and had come to this country just a year earlier, in 1899, along with his wife and four children. 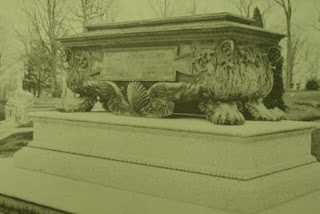 Brainard Warner continued in the real estate business until 1902, when several of his eight children and former business partners took over the operation.  Warner himself died in 1916.  The Washington Star reported upon his death that Warner “was one of the most forceful factors for the advancement of Washington….gifted with a remarkable faculty for organizing public movements… at the same time an unusual capacity for leadership.”  His fantastic tomb in Oak Hill Cemetery is pictured here.

In 1924, the Warner mansion at 2100 Massachusetts Avenue was razed and replaced by the apartment building located on the corner that is today known as the Fairfax Embassy Row Hotel.

Posted by HouseHistoryMan at 11:34 AM