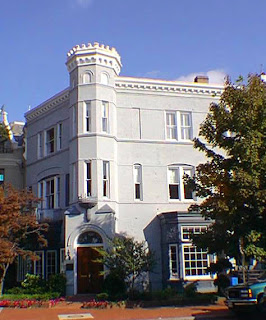 Upon its completion in early 1891, the corner structure, which had a residential section above and a commercial section on the ground floor, was sold to the Boyd family, who would continue to own it until 1963.

Dr. George W. Boyd was born in the District of Columbia in November 1862, a first-generation American whose father was an Irish immigrant, and whose mother hailed from Maryland.  A physician by profession, Boyd purchased the building at the young age of 28.  He was married to Clara R. Boyd, who was three years his junior and also a first-generation American-born citizen; both of her parents had emigrated from Germany prior to the Civil War.  They had a total of seven children, many of whom would own the building until 1963.

Starting in 1893, the store in the ground floor of 201 Maryland Avenue was occupied by druggist Augustus C. Taylor & Co., which operated a drug store with sidewalk ice cream service and tables in front of the store.

The store was well known as a community gathering place where a large tin of keys was kept for neighbors that found themselves locked out of their homes, and the pharmacist served not just as druggist, but also as neighborhood medical advisor, lay chaplain and even marriage counselor.

The picture above was taken in 1906, and shows the outside soda fountain patio with Dr. Augustus C. Taylor appearing in his white pharmacy coat behind the table surrounded by neighbors. Miss Elizabeth O'Cullen is seen in the white dress, facing Clyde Bailey.  Son Edward Taylor appears as a shop clerk inside the store with a bow tie.

Some 75 years later, in 1980, Taylor’s youngest son Frank, who had grown up on Capitol Hill and spent his entire career at the Smithsonian, eventually becoming its director general of museums, gave an interview to the Columbia Historical Society in which he described life growing up in his father’s drug store.

“The dominant character of the place and time was the continuous movement of the people and conveyances in the streets from early morning to late at night.  Heads of families went at daybreak headed for the Center Market returning an hour or two later pulling boys’ wagons filled with food.  After breakfast the same men went by dressed for work…


“The early milk and bakery wagons were followed by the ice man, coal and wood wagons and the hucksters who brought produce and game from the truck farms east of the Eastern Branch.  The housewives and their cooks came out to buy and gossip, others met on the way to notion stores and grocers…
“Writers have likened the drugstore to the neighborhood pub as a working man’s club.  In those days it was more of a communications center.  This was before radio and when private telephones were rare.  A little one-sheet newspaper, The Washington Bulletin, had three issues a day which were distributed by boys on bicycles who hung the sheet on hooks provided in stores, barber shops and bar rooms.”

Some additional interesting historical notes about the original pharmacy include the fact that Taylor applied for a permit to place an 800 lb. gas engine in the cellar in 1895.  In order to submit the permit, the applicant was required to gain permission from all property owners located within 90 feet of the proposed location of the engine.

Just a year after the proprietor’s picture had been taken in January 1907, the Potomac Electric Power Company applied on behalf of building owner George Boyd for a permit to erect a sign at 201 Maryland, advertising the drug store with a relatively new technology: incandescent lights.

The sign was to be made of metal, hung by iron braces flat against the side of the building, and measured 10’4” wide by 2’6” tall.  The design, seen at right in a sketch drawn by the applicant, consisted of white letters on a blue background, and contained 24 incandescent bulbs of 4 candle watts each.

In 1917, Taylor and Lamb sold the business to J. Willard McChesney and Paul L. Joachim, who began operating the store as M&J Drugs.  Not much is known about McChesney, but Joachim was listed as residing at 651 E Street, NE, and operating another drug store on the Hill, just a couple of blocks away at 200 E Street, NE.
Posted by HouseHistoryMan at 8:00 AM

What i don't understood is in truth how you are not really much more well-liked than you might be now. You are so intelligent. You know therefore significantly relating to this topic, made me individually consider it from numerous numerous angles. Its like women and men are not interested unless it is something to accomplish with Lady gaga! Your own stuffs outstanding. Always deal with it up!
My webpage > definitive technology center speaker