Thought Your Fireplace Heated Your House Long Ago? Think Again. 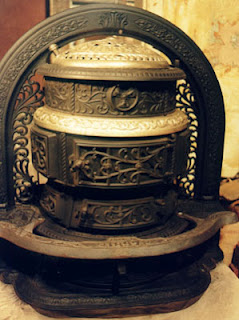 Most Washingtonians enjoy a working fireplace in their older homes,  but might wonder how it was able to heat the entire structure being as notoriously inefficient as they are.  The simple fact is, they didn't.

Most fireplaces were outfitted beginning in the 1870s with a "Latrobe Stove.”  These devises were invented in Baltimore, Maryland by John Hazelhurst Latrobe (1803-1891), the son of noted engineer and architect Benjamin Henry Latrobe, and are sometimes coined a “Baltimore Heater.”

They were squat and round, about 20 inches in diameter at the base, and stood about two feet high.  They fitted into a fireplace opening  and burned coal, requiring a daily cleaning of a somewhat messy ash tray.  There were 30,000 in use by 1878 in Baltimore alone!
Posted by HouseHistoryMan at 7:00 AM

I lived at 3811 South Hanover Street in Baltimore, MD (Brooklyn)from 1932 until 1950. We had no heat other than a coal burning stove in the kitchen and a beautiful cast iron Latrobe stove in the small parlor. The only heat we got upstairs in the bedrooms was through registers in the ceilings of the kitchen and parlor.
When it was time for bead, our grandmother used to put me and my two brothers in bed, and said "make sure that you are comfortable, then put enough blankets on us that make it almost impossible to move.
In the morning it was our chore , each on special days, to go to the stoves, empty the cinders and put them on a device that let the ashes fall, but retained the unburned clinkers to be used again. The house was never really heated until my dad replaced the stoves with kerosene heater

This is a good common sense blog. I am very glad to read this.
Exterior Architectural Millwork & Moulding in Florida