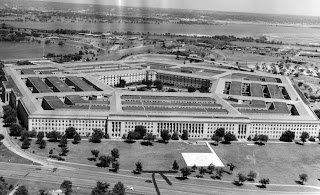 With the 2001terrorist attacks in Washington and New York City taking citizens off guard, a few old time Washingtonians during that month no doubt began to recall several times in the past century when Washington served as a potential target for foreign attack.  Like today, city residents gathered together in an effort to thwart such an attack with whatever means possible, and joined the rest of America to pool resources for the defense of the United States.  The onset of World War II was such a time period. 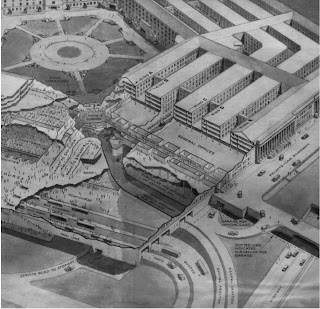 Ironically, and perhaps a bit startling, the groundbreaking of the Pentagon building was held on September 11, 1942; exactly 59 years prior to the date of its most recent, and most serious, attack.  Housed on a 360-acre campus atop 41,492 concrete pilings, the building housed nearly 30,000 workers beginning just 16 months later, thus having the distinction of being the world’s largest office building, and built in record time.

One of the 3,100 major architectural drawings produced for its construction was a fascinating cross section pictured here, showing the multiple rings of corridors.  Large ramps, still in use, replaced the need for elevators, conserving precious metals. 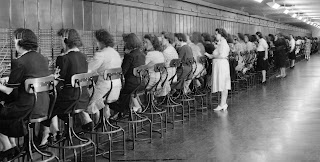 Seen at left is a partial photograph of more than 300 telephone operators that were required for a building the size of the Pentagon.  They were photographed in September 1942, and their number would have typically served an estimated 125,000 persons had they been in a typical office building.
Its design in a five sided shape made possible a short, fifteen minute walk from one office to another in the structure, despite being more than five football field long on each side; I timed this when I worked in the building myself as a civilian in a historic preservation job at the Headquarters of the US Air Force in the early 1990s.  It peaked my interest and led many years later to writing Washington, DC: TheWorld War II Years.  The pictures seen here are from that book. 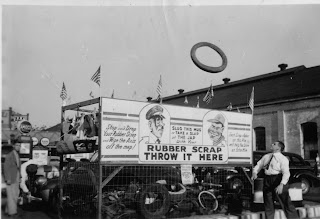 The Japanese control of the Dutch East Indies and Malaya in 1942 caused an immediate shortage of rubber countrywide, a material also critical for the War effort.  In June of that year, President Roosevelt launched a rubber scrap drive, and Washingtonians responded by setting up various centers where tires and bicycle tubes could be donated, such as one along Georgia Avenue, illustrated here.  More than a million pounds had been gathered in the city just month later. 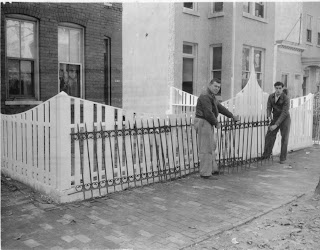 Wrought Iron and other metals were also needed for the war effort, and like many Washington residents, the two unidentified residents shown here, replaced their iron front fence with a then more patriotic wooden picket fence.

The population of Washington swelled from 663,000 in 1940 to over 800,000 by the time the WWII ended.  Many of the new residents were women responding to the drastic need of War related work from typing to manual labor in production lines.  They often took up room and board in one of the thousands of townhouses converted into rooming houses by residents of all economic stature. 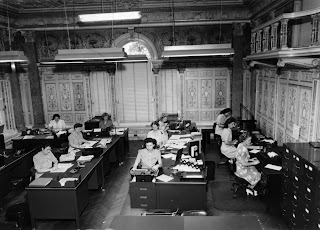 Several women often shared one rented room in a townhouse.  Seen below, the Washington Star carried a January 1945 image of servicemen sharing sleeping quarters at “Friendship House,” part of the Covenant First Presbyterian Church at 1229 Connecticut Avenue, in the office of Reverend Dr. Albert J. McCartney.

Many of Washington’s theaters, public spaces, and even private ballrooms were converted into office space.  The Washington Auditorium with stage area and balcony converted into offices, and the box seats reserved for file cabinet use.   Even the ballroom of the Leiter mansion at 1500 New Hampshire Avenue, overlooking Dupont Park, was outfitted as temporary office space, seen above in August 1943.

The Office of Civil Defense ran an education outreach program that included a cartoon resource on protecting one’s home; It instructed one to remove attic refuse to prevent fires from incoming magnesium bombs, and carried a suggestion to heavily whitewash the attic’s exposed lumber for the same reason; perhaps solving the question for many contemporary home owners wondering why such an effort was undertaken in non-living space. 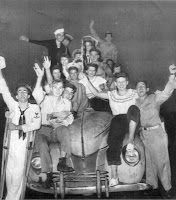 Washingtonians and Americans obviously prevailed throughout the War effort, and celebrated on August 14, 1945 on F Street downtown, as these revelers illustrate, at right.  However, other threats since WWII have kept Washingtonians on alert, including the Cold War.

Only a handful of Dupont residents may recall that the Connecticut Avenue underpass of Dupont Circle was sealed off in August of 1964, to provide civil defense in the event of a nuclear attack; it was filled with food and supplies as an official fall-out shelter for area residents.

Posted by HouseHistoryMan at 8:00 AM