History Mystery Solved: Where in DC is this House?

This entry on a history mystery house was a tough case to crack.  I obtained the pictures of a stone house located somewhere in Washington, DC from an online auction that originally appeared on a single page of the August 23, 1923 edition of Architectural Forum.  The only clue I had was that it was the home of Charles J. Cassidy, Esq.

Normally that would result in a rather easy investigation into the City Directories about the time the magazine was published.  The problem was that two different addresses we found for Cassidy no longer existed: First, 3821 Michigan Avenue, NE and then later, 1063 Michigan Avenue, NE, somewhere near Perry Street.

And, another hiccup: Cassidy was a builder who completed over 120 buildings and houses in Washington, DC, many of them for Catholic University.  So, was this his house, or was it built for someone else?   I began to narrow down a few of the known addresses where he built houses in Washington, but grew tiresome when I Googled about two dozen of them which were obviously not the stone house pictured.

I even drove Michigan Avenue looking for the house to no avail.  Who could think that a significant house made of solid Potomac Bluestone could be torn down less than 90 years after it was constructed?  Even the trim was composed of white marble, and the roof made of shingle tile.  This house was built to last. 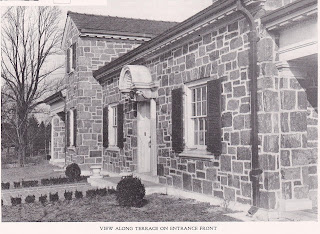 So, I turned to researching a bit more about Cassidy.  His obituary on January 1, 1941 revealed that he had been born about 1870 in Washington, DC.  He died at home of a heart attack at 1063 Michigan Avenue, one of those addresses that no longer existed.  His obit did reveal that he had constructed the Mullen memorial Library and Science Building at Catholic University, and the Chapel and Refectory Building at Trinity College.

A quick check with our Ancestry.com subscription confirmed his birth date of January 16, 1870; he married his first wife Grace Miller about 1911, but she died just 7 years later, in 1918.  He married his second wife Augusta Braun, 30 years his junior, about 1927.  His full name was Charles Joseph Cassidy, and he was buried in Mount Olivet Cemetery.  His tombstone appears below. 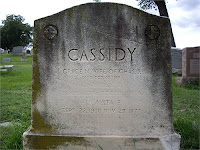 Still, where was this dam house?  We returned to the database that the DC Historic Preservation Division has assembled (at a cost of more than $400,000 in taxpayers money for what was essentially a data entry exercise: more on that later).  The problem is that one cannot simply enter “Charles Cassidy” or even "Cassidy, Charles" in the database as a builder, because nothing will return!  How is that possible?

One has to query the MS Access database for every single builder, and scan down hundreds of pages to see how the database was populated, and you will discover the problem.  You can’t run a “builder’s career by date” report because our Charles Cassidy had been entered in the builder’s field four different ways.

The only way to find him was to run four different reports entering:  Cassidy, (C. J.) Co or Cassidy (C. J.) Co. Inc. or Cassidy, C. J. or Cassidy, Chas J.  So that’s why our query on Charles Cassidy didn’t work.  Make sure you try several attempts, because even one space left out between the C. and J. will return an error.  Watch your periods, too! That’s why homeowners pay us to research, I guess, because it’s maddening! 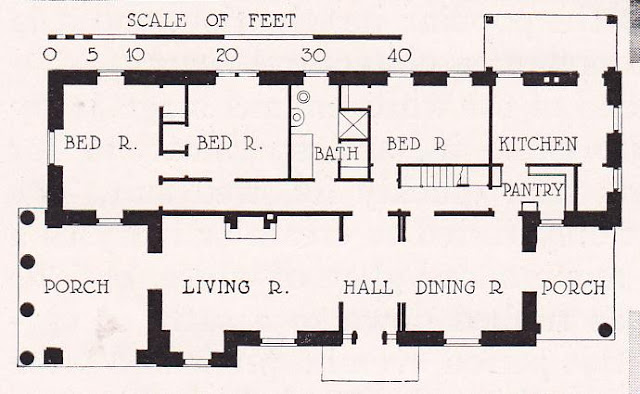 I then studied the four different building lists, and narrowed down houses built of stone, many of which had no address…several that were entered as 0 Michigan Avenue, NE intrigued me, and then I spotted one issued on May 21, 1914 (well before the magazine was published) for a stone house measuring 65 feet wide by 33 feet deep, which seemed to match our picture and the floor plan illustrated above.  It was built at a cost of $4,500.

Then I got the idea to magnify the picture, and there was an address inscribed on the stone to the right of the door!  Alas, it wasn’t legible no matter how hard I tried.

The permit only noted that it had been built on the southeast corner of Quincy Street, NE (in the Brookland neighborhood).  That was a significant clue, so I went about traveling the various southeast corners via Google, looking for the house, or where it might have been.  Several potential vacant locations came up, one of which was the entrance gate to the Franciscan Monastery, the other a playground on Turkey Thicket Park: could the house have been torn down?

Then, trolling past an ugly modern apartment complex on Michigan Avenue, NE at the corner of Quincy Street we hit Bingo!  There on the southeast corner was a low rise bluestone retaining wall still in existence…with the former central entrance steps filled in with newer stone.

We had our site and our mystery solved!  It appears his house was razed for the apartment complex, who wisely retained his low rise wall for us historians to use as a clue to the missing Cassidy house.  Maybe some reader will recall when it was razed, or what happened to those elegant blue stones and white marble trim.

If you want to purchase the original picture, you can do it HERE.