Bodies Under the John Burroughs House at 1332 V Street

Although all of the squares and blocks south of today’s Florida Avenue were laid out by architect Pierre L’Enfant in 1792, most were not developed into rows of town houses until nearly 100 years later.   However, they were utilized for a variety of purposes such as orchards and gardens, and one very large square in particular, surrounded by U, V, 13th and 14th Street, once served as a large cemetery for St. Matthew’s Catholic Church.  Today the square is site of the Ellington apartment building (built in 2003), the Harrison School recreational playground and baseball field, commercial buildings, nightclubs, and a row of homes along 13th Street.

Where did the cemetery go?  While everyone thinks they have moved a cemetery and the bodies within, inevitably a few remain, or in this case, dozens remained (and likely do even today).  St. Matthew’s church had begun using the square for cemeterial purposes shortly after it was established in 1837.  Hundreds of graves were to have been relocated by the time that rows of houses were being built on the square in the 1870s, but several were still being unearthed as late as 1945.

The square was also home to noted poet, naturalist, and writer John Burroughs, who built a house at 1332 V Street in 1867.  Historian John Clagett Proctor wrote about both the cemetery and the John Burroughs house in the Washington Evening Star in 1945, when it was still standing.

Fortunately, due to Burroughs published writing on a wide variety of nature issues, a fascinating record exists of his home’s construction, his interaction with interred graves, and the areas rural nature.  In 1867, Burroughs (1837-1921) moved from a home on Capitol Hill to a new, ten room brick house he had built at 1332 V Street.  According to his writing, he raised tomatoes and corn, which proved to be difficult as he stated “There’d been an old Catholic cemetery on the spot, and what with original digging of the graves and the more recent removing of the bodies, dirt had been thrown up on top that ought to have been below.”

Burroughs went on to write about the construction phase of his house, which was supposed to have been on vacant land.  “The removal of the bodies hadn’t been done very thoroughly, and when we were putting in a cistern we unearthed two coffins.  They were decayed, but not broken, and were buried them alongside the fence.  While we were burying the chimney and had it completed up to the second floor, it settled one night nearly two feet.  Evidently it was right over a grave and had gone down on the body.  We kept on.  The man under the chimney was held down by great weight, and I expected to hear him groan, but never did, and I never saw any spooks on the premises.” 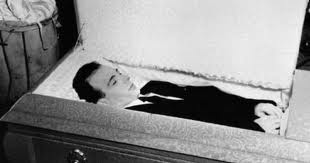 OK, so the picture at left has nothing to do with the site, but it is creepy, so I thought it would create a mood.  Bonus points to the person that correctly identifies the body!

Burroughs had first come to Washington in 1863, with the intention of going into the Army, but changed his mind once he witnessed the mangled and injured arriving at local hospitals from the field.  He secured a clerk position at the Treasury in 1864, earning a salary of $1,200 per year.  He moved to 1332 V Street along with his wife and a cow named Chloe, adding two additional cows and chickens a short time later.

He was visited by a number of literary figures, including Walt Whitman, with whom he carried on an affair, with both gentlemen confessing love for one another in myriad stories and writings.  Whitman stayed at the Burroughs house for weeks at a time.


John Burroughs earned his place in the Ecology Hall of Fame with a million and a half copies of his twenty three volumes of essays extolling nature and encouraging people to experience the natural world. While he wrote for adults, teachers found his work both challenging and interesting to students.  In 1863, John Burroughs wrote of the area between Piney Branch Road and Georgetown:

“There is perhaps not another city in the Union that has on its very threshold so much natural beauty and grandeur, such as men seek for in remote forests and mountains.  A few touches of art would convert this whole region into a park unequalled in the world.  There are passages as wild and savage and apparently as remote from civilization as anything one meets with in the mountain sources of the Hudson or on the Delaware.”

In a letter to Lucy Warner Maynard, author of Birds of Washington in 1898, Burroughs wrote on November 3rd of that year that “the happiest years of my life were spent in Washington and the fields and woods about it.  I hope the birds there have brought you as pure a joy as they did me.”  Burroughs died in 1921.

Clagett reported that Burroughs house still stood at 1332 V Street in 1945, the year additional bodies were uncovered elsewhere on the square, prompting his investigative column.

I linked to this on U Street Buzz on Facebook: http://facebook.com/UStreetNW

Many thanks...I once owned and lived at 1800 Vermont Avenue, and was the guy behind designating the neighborhood as a historic district in 1999: I also was the man behind your self guided walking tour!

Great write up! Always amazing history in our neighborhood.

One small edit/correction: Harrison Recreation Center at 1330 V Street, NW is NOT affiliated in any way with the school across the street, they simply share a name.

Harrison Recreation Center is operated by DC Department of Parks and Recreation and the Harrison School Building (currently under renovation) will soon be home to the Meridian Public Charter school.