The distinguished building at the northeast corner of 14th and T Street today houses a branch of the well known Arena Stage, but for many years it was an important African-American owned restaurant and nightclub known as Club Bali, one of the elite clubs nestled among the many venues that lined 14th and U Streets in the 1930s and 1940s that I researched as part of our work on the Greater U Street “City Within A City” Heritage Trail for Cultural Tourism DC.  Its eventual decline hit a low with the 1975 murder of the owner in the building.

Pacific themed restaurants and clubs began to become popular in the late 1930s, and Club Bali opened in 1943, joining other watering holes in Washington such as Trader Vic’s in the Capitol Hilton.  Club Bali was owned and operated for a time by Benjamin C. Caldwell, and featured live shows along with its own, fourteen piece orchestra located in a bandstand behind the bar.

The building itself was built for Caroline R. Gody beginning in January of 1907, designed by architect George R. Pohl as a billiards and bowling hall.  By 1914, according to the City Directory, it housed the “Duryee & Williams” bowling alley, owned by Henry Duryee and Cassin Williams.

In 1920, it was home to the Columbia School of Drafting, and served as a location for Taylor’s used car dealership in 1930.  In 1937, the building served as an exhibition hall for “National Memorial to the Progress of the Negro Race in America,” according to building permits.
Converted to Club Bali in 1943, the club headlined many important acts during the 1940s and early 1950s that played to mixed audiences of black and white patrons, similar to most of the U Street venues.  Its cover charge of five dollars ensured an elite crowd of partygoers of the era. 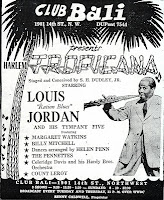 After her 1947 prison term for narcotics made it impossible for her to appear at Manhattan nightclubs, Billie Holliday began years of difficult touring; she played Club Bali in 1947 and in 1948, and returned to the Club’s successor, coined Cafe Trinidad, in 1954.  Willis C. Nelson served as the musical director at the club for many years.Owner “Bennie” Caldwell was convicted of jury tampering in 1950 in the William “Snags” Lewis gambling and street numbers case, who had been one of his many patrons at Club Bali. He was arrested in his home at 1118 Girard Street, NW in March of that year.

The building became a long succession of restaurants and clubs in the 1950s and 1960s, eventually becoming Jack Wiseman’s Lounge.  Jack himself was murdered in his office in the rear of the building in 1975, in what police contributed to participation in a heroine drug ring.  The case is still unsolved.
In 1984, the building was converted for use as a branch of Living Stage Theatre Company, founded by Robert A. Alexander in 1966 as a professional improvisational theater that offered participatory workshops to children, youth, teachers, parents, and community members. Living Stage’s main philosophy is based in the belief that everyone is born an artist and the act of creation is the ultimate act of self-affirmation.

Copyright Paul K. Williams
Posted by HouseHistoryMan at 11:47 AM

Great piece. Reminds me of the rich and often tragic history of musicians in this great city. Currently I am playing in the house big band, 17 pieces, at the storied Bohemian Caverns which is at 11th and U St NW. Every Monday night at 8pm you can hear the amazing sounds of a bygone era. I am part of U St history and am honored for that :)

Just an update- Arena Stage disbanded Living Stage, but continued using the building for its education programs. From 2002-07, The Washington Stage Guild was in residence, producing plays. Eventually the building was sold and gutted, and now is a Matchbox pizza restaurant.