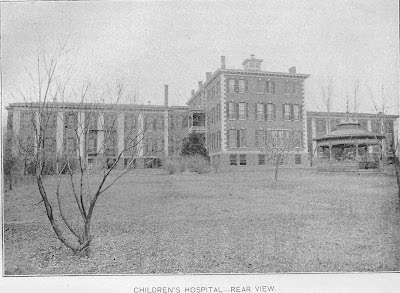 Many Washingtonians know of various hospitals located in the city, either converted into residential uses or razed all together.  Unless you were around in the 1990s when it was an abandoned shell, you might not know about the large and modern Children’s Hospital that was once located just north of the U Street corridor on what is today Harrison Square, a whole city block of somewhat newly completed townhouses bordered by 12th, 13th, V and W Streets (Square 272).  I had a great time researching it for my book Greater U Street and purchased a rare book that contained these images published shortly after it was opened. 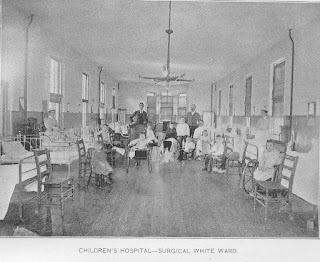 The idea for a Children’s Hospital in Washington began in 1869, when Dr. S. C. Busey of the Columbia Hospital Dispensary and other recognized that diseases of infancy and childhood were not adequately being addresses in area hospitals.  Thus, on December 2, 1870, the “Children’s Hospital of the District of Columbia” was incorporated and located in a small building at 13th and F Street, with only 12 beds.  In 1872, a larger facility was rented on E Street, as plans were being made to purchase a suitable site for a large facility.

The Board of Directors purchased the entire Square 272 in 1875 for $15,722.88, or just 16 cents a square foot.  At the time, it was located at the edge of the city, just inside Boundary Street, today renamed Florida Avenue.  Directors went to work raising funds for the construction of the Hospital in stages, the first building being ready for occupancy the same year of the land purchase, in 1875. 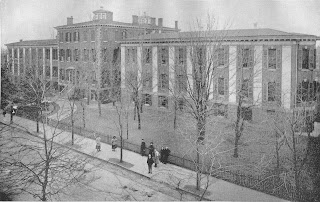 Just three years later, the building was expanded to the east and west, and in 1890 with larger wing expansion and an enlargement of the central building, to form its final design pictured here.  The building cost a total of $23,662.22.  It was designed by John C. Harkness “one of the most experienced and reliable architects and builders of this city,” and built by contractor J. G. Naylor.

The original Board of Directors had interested a Dr. James Crowdhill Hall to serve on its Board, and he would eventually give a total of $76,395 toward the effort in an era when a four-story brick townhouse could be built in Washington for $3,500.  In fact, Dr, Hall was apparently living so well that he was tried by the Medical Association in 1850 for neglecting to send bills for professional services!  His long career was distinguished by serving as the physician to every President from Jackson to the death of Lincoln’s son Robert Todd Lincoln. 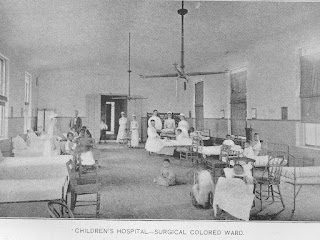 During the first ten months of operation, the Hospital served 94 patients of both black and white racial backgrounds, as stated in their charter.  Once admitted, however, the patients were separated by race, but attended to by white rotating nurses serving both wings of the facility.  In 1879, the Hospital Administrators determined that the actual expense of operating and maintaining the facility came out to a little less than 41 cents per day, with an average of 31 patients.

It also contained a small cemetery for burials of unknown, abandoned, or homeless children or other indignants of the city: it was never documented that this cemetary was relocated before or after the building was razed.  By 1889, the building and land were valued at $200,000, reflecting on the growth of the Greater U Street neighborhood and the city of Washington following the Civil War.

A nurses training department was established in 1891, and an infant’s ward created in 1894.  In 1898, the Hospital had 102 beds, 58 of which were reserved for medical and 44 for surgical cases, in addition to 12 beds for infants.  In all, a team of 16 nurses was on duty at all times at the facility.

Children’s Hospital was expanded again in 1950, when a large building was constructed on the property along 12th Street.  Other additions and improvements were added to the complex throughout the years, partially obscuring the original design of the hospital.

Following the 1968 race riots that began in April of that year, Children’s Hospital eventually relocated to more expansive land in NE, and rented the aging facility to smaller institutions that were retained in small portions of the building before the complex was abandoned in the 1980s.

Subject to numerous fires, break-ins, and a significant homeless population, the city property languished for two decades before being torn down in 1998.  Community groups and developers proposed myriad uses for the site, including a retirement village, grocery store and high-rise condominiums.

The square was eventually developed into Harrison Square by Bethesda developer Donatelli & Klein (now EYA) into nearly 100 individual townhomes arranged in a traditional city square, being completed in late 2001.  Knowing the history of the site and witnessing the demolition and construction as a neighborhood resident, I never heard a word about relocating the former burial ground on the site.

My father, George A. Washington, was a patient at Children's Hospital 1941, at age 5. He was hit by a truck & rushed there, where his right leg was amputated. For more than 30 years, his leg was displayed in a glass display case in the Main Hallway Entrance off 13th & W. He's soon to be 81 years old & we've often thought what happened to his leg when the hospital moved to the NE location.
Tim Washington

I worked my first nursing job at the old hospital at 13th and W 1971 to 1972 on the isolation unit. Of course, one of the first things my head nurse told me, was that I couldn't wear the hat I had worked so hard for! But I didn't really mind, because it was hard to keep on my hair. The experience of working there , and living in D.C. I have treasured for the 45 yrs. Of my career. I wish there was more info available about the building. All of the staff I worked with was wonderful, every person. Names become fainter,but the faces are still just as vivid.