The Printing of National Geographic Magazine in Washington, DC

The large building that houses XM Satellite Radio at the intersection of Florida Avenue and Eckington Place, NE, is passed by thousands of Washingtonians everyday on their way in and out of the city along New York Avenue, likely without knowing that it was once one of the largest printing plants in the United States.  In fact, if you have a vintage National Geographic magazine lying about, it is likely it was printed at this plant.

The printing firm responsible for its construction was named Judd & Detweiler, which was established in 1868 by John Gough Judd and Frederick May Detweiler.  Originally from Pennsylvania, they were first located on the third floor of 517 7th Street, NW, where their first printing job that year involved 5,000 blank forms for the U.S. Supreme Court.

The firm prospered, and by 1883, they moved into a handsome building at 420 11th Street, NW, when they were joined by their sons George H. Judd (then only 16) and Fred F. and George H. Detweiler (below).  They then printed such books as a 1,879 page tome on the origins of the Smithsonian that was hand set in type, letter by letter, as the Linotype machine was not invented until 1886.

Founder Frederick M. Detweiler married his second wife Nellie in 1894, when he was 64 and she was just 33.  In fact, she was five years younger than her stepson, Frederick F., who had been born in May of 1857 in Washington.  They all lived at 504 I Street, NW.  In 1893, Fred Jr. ventured into the real estate business when he obtained a building permit to build 18 houses between 2701 and 2735 P Street in Georgetown, designed by George S. Cooper.  They were not completed, however, until about 1903, due to the economic depression of 1893.

The firm purchased the land at Eckington and Florida Avenue from the Youngsborough estate in 1912, and moved into a small new printing plant on the site in April of that year.  It was designed by Arthur B. Heaton.  Two large additions were completed by 1920, also designed Heaton, creating the building seen today.  It was known by a sign on its façade that read “The Big Print Shop.”

Judd & Detweiler began printing the National Geographic magazine in 1896, when it had a circulation of just 5,000.  By 1926, the firm was producing over 80,000 copies of various magazines per day; National Geographic alone then had a monthly subscription of nearly 1 million issues that required almost ten days of press time.

The firm also printed monthly magazines for the Red Cross and the Daughters of the American Revolution, in addition to the printing needs of the Supreme Court and other government agencies.  Many hotel menus and books of the era were also proudly printed at the Eckington plant.

George H. Judd and his son, George E., were avid hunters and outdoorsmen, who along with Sam Sours, proposed and lobbied for the creation of the Shenandoah National Park beginning in 1927.  They had been spending summers there at their country house in Skyland since 1898.  Locally, for decades, Palm Sunday was coined “Judd & Detweiler Day” at Calvary Baptist Church at 8th and H Streets, NW, as officers and employees of the company took part in special services.

George E. Judd, grandson of the founder, took over as President of the company in 1928.  The firm lost the National Geographic contract in 1957, when they could not produce the 2,250,000 monthly issues in color.  They later obtained color web-offset presses and were pleased to print The White House book in 1962 as their first color document, a record of Jacqueline Kennedy’s restoration of the President’s residence. 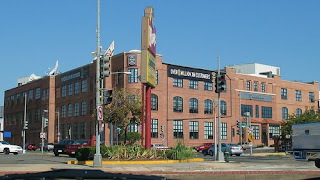 The building at 1500 Eckington Place was added onto several times, the last being in 1972, to accommodate several large presses and storage areas.  By 1986, the company had built large plants in both Maryland and Virginia, and the Eckington facility closed after 117 years in business in the city.  At the time, 200 employees worked in the 300,000 s.f. facility.  It was acquired by Perry Graphic in 1997, and is today a subsidiary known as Perry Judd’s Incorporated.

In July 2000, after a 14 month renovation, the former printing plant became the headquarters for

XM Satellite Radio, the largest state-of-the-art broadcast complex of its kind in the U.S., with 82 all-digital studios.  An emerging force in broadcasting, it was incorporated in 1992 and has been publicly traded on the NASDAQ exchange since October 5, 1999.

Copyright Paul K. Williams
Pictures from The First 100 Years of Judd & Detweiler,
Posted by HouseHistoryMan at 8:30 AM

When it comes to stock choices, sheet-fed presses can use a wider variety including those which have heavier weights. Continuous papers are not made as thick since they are designed to run through the press speedily. If you're printing on lightweight sheets, then a web press is definitely ideal. If you want more flexibility in the paper thickness, then a sheet-fed is the better choice.

I worked at Judd and Detweiler as a plant engineer from 1976 to 1979. One of the interesting details of the 1962 "The White House" book was that the White House through Clark Clifford, refused to pay for the book(this was passed on to me by the salesman) and he dared Judd's to sue the White House. As you may know Clark Clifford was finally criminally indicted on another matter and soon died with zero reputation.

I also worked at Judd & Detweiler as a summer employee in the building maintenance shop during the summers of 1973-1977 (I probably know CJG). My father worked there for 34 years in the maintenance shop, stock room and later in the purchasing department. Offset printing was a dying technology but the high labor costs from union contracts helped push the Eckington plant into an early grave. There were at last three lengthy strikes during the 5 summers I worked there.